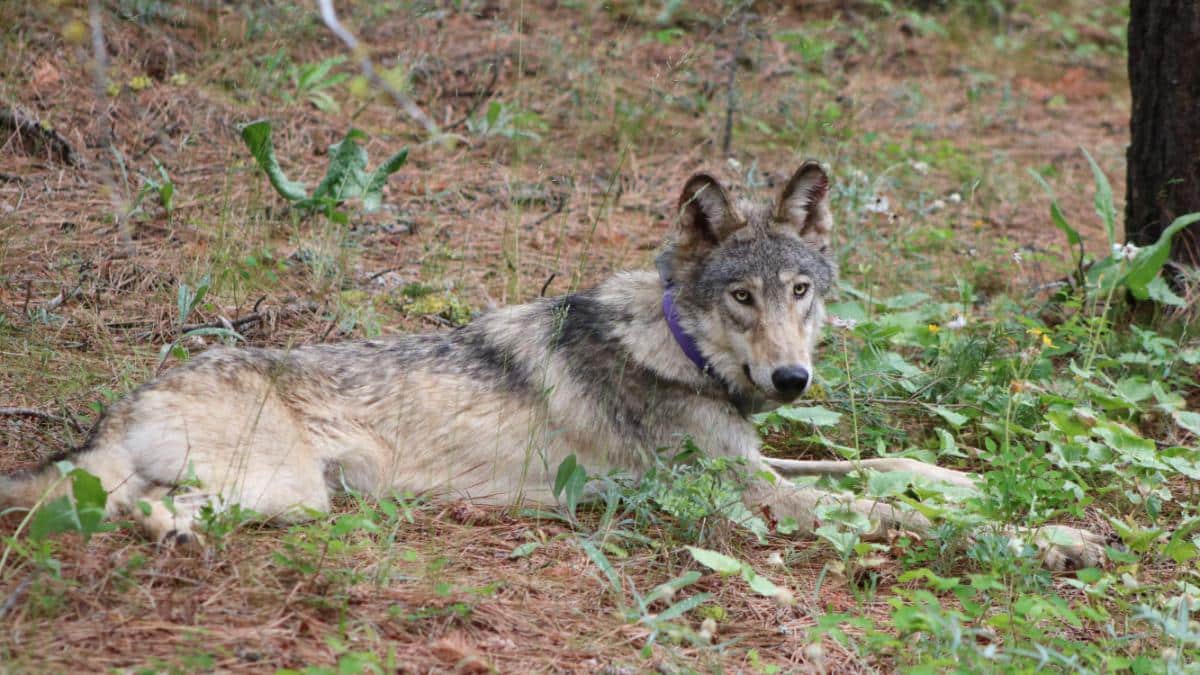 OR-93 traveled hundreds of miles from Oregon to California. Austin Smith Jr. / Confederated Tribes of Warm Springs / California Department of Fish and Wildlife

A young male, OR-93 traveled hundreds of miles from an area southeast of Mount Hood, Oregon, to California’s central Sierra Nevada mountain range, the California Department of Fish and Wildlife (CDFW) announced Friday. The agency said he traveled farther south into California than any previous collared wolf. His trek is also the longest tracked journey of any gray wolf during the last century, The Guardian reported.

“OR-93’s historic trek so far south into California’s central Sierra Nevada is thrilling news for wolf recovery throughout the West – and underscores that species recovery is not isolated to separate states; what happens in the Northwest greatly affects the success of wolves in other states, and vice versa,” California Program Director at Defenders of Wildlife Pamela Flick said in a statement emailed to EcoWatch.

OR-93 hails from Oregon’s White River pack, according to the CDFW. The U.S. Fish and Wildlife Service and Confederated Tribes of Warm Springs fitted him with a tracking collar in June 2020 within his home territory. At some point he left the area, likely in search of new territory and a mate. He reached California’s Modoc County by the beginning of February; by the end of the month, he had traveled to Alpine County, between trans-Sierra State Highways 4 and 108. He then passed into Mono County. This put him just east of Yosemite National Park and marks the first time a wolf has been known to approach the park in more than 100 years, The Associated Press reported.

The wolf is the 16th one to travel into California, and most have hailed from Oregon. However, this journey is notable from a conservation standpoint for two reasons. For starters, OR-93 is the first wolf from the White River pack to enter the state, which is important for the population’s diversity.

“As the first known member of the White River Pack from western Oregon to disperse into California, OR-93 also importantly brings the potential for increased genetic diversity to our state,” Flick said. “We look forward to watching the journey of California’s newest wolf, and we will continue to welcome gray wolves back to their historical home in the Golden State.”

OR-93’s epic journey also places him in a habitat with enormous potential for wolves.

“We’re thrilled to learn this wolf is exploring deep into the Sierra Nevada, since scientists have said all along this is great wolf habitat,” Amaroq Weiss, senior West Coast wolf advocate with the Center for Biological Diversity (CBD), said in an email to EcoWatch. “He’s another beacon of hope, showing that wolves can return here and flourish as long as they remain legally protected.”

California’s wolves were eradicated in the early 20th century following a concerted campaign by the livestock industry. The first wolf to return to the state in 2011 included another Oregon wolf, named OR-7. There are now fewer than a dozen wolves living in California, including the Lassen pack, which has produced pups every year between 2017 and 2020, according to CDFW. Another pair of wolves has also been spotted in Siskiyou County, and scientists think they will produce pups this spring.

“We have a burgeoning population,” she told the Chronicle. “It’s exciting.”

However, not everyone shares her excitement. The presence of wolves in the state has concerned ranchers.

“There are diverse constituencies with varying viewpoints — we do our best to walk that tight rope,” Traverso told the San Francisco Chronicle.

There have been some wobbles on that walk. The seven-member Shasta pack, the first wolf pack to be discovered in California in almost 100 years, disappeared months after being found in 2015, the CBD said. The disappearance followed the pack’s implication in two livestock casualties, and there are concerns they may have been poached.

Defenders of Wildlife called for more strategies to reduce livestock and wolf conflicts as wolves’ California presence increases. Meanwhile, OR-93’s success in the state will likely depend on more personal matters.

“Given the time of year, we assume OR-93 has traveled such a long way in search of a mate,” CBD’s Weiss said. “I hope he can find one.”