Grassroots Struggle for Food Sovereignty and Liberation of Black Cultures 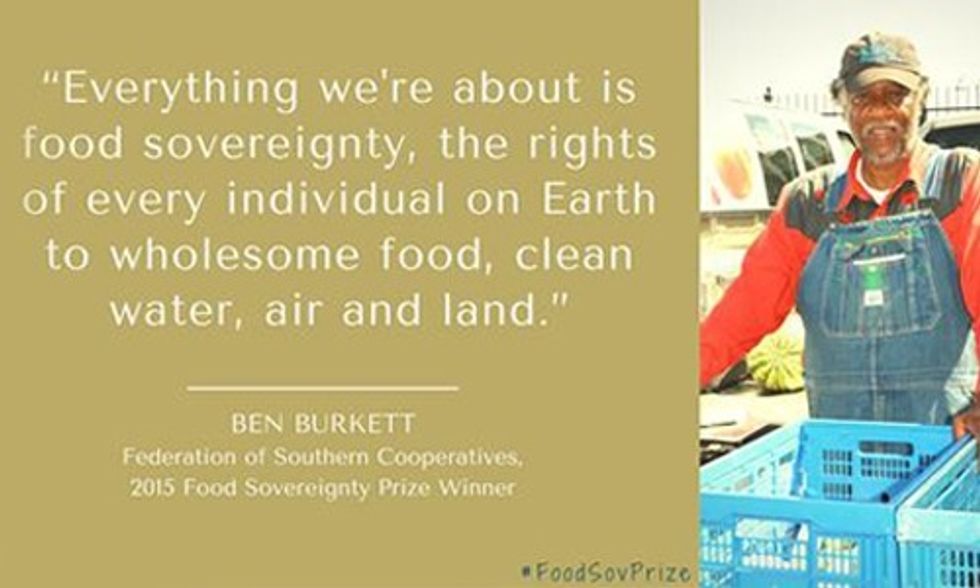 Two organizations have been selected to receive the 7th annual Food Sovereignty Prize this year in an event that will take place on Wednesday, Oct. 14, in Des Moines, Iowa. On the heels of a visible resurgence of the struggle for black liberation made visible by a spate of police brutality against Black Americans, the two winners this year demonstrate a commitment to solidarity with Black people's struggles globally. The award—honoring grassroots organizations that uphold the right of all communities to democratically determine their own food systems and who connect their struggles for food sovereignty to those of communities fighting for self-determination around the world—goes to the Federation of Southern Cooperatives headquartered in Georgia and the Black Fraternal Organization of Honduras.

“Everything we're about is food sovereignty, the rights of every individual on Earth to wholesome food, clean water, air and land," says Ben Burkett, a 4th generation farmer in Mississippi and organizer with the Federation of Southern Cooperatives.

The federation is a landmark membership-based institution keeping family farmers (90 percent of their members are black families) on the land in 13 Southern states since 1967. African-American farmers are nearly extinct: Black-owned farms have fallen from 14 percent to 1 percent in less than 100 years. Emerging from the Civil Rights Movement, the federation promotes land-based cooperatives, provides training in sustainable agriculture and organizes farmers to raise their voices in local courthouses, in state legislature and in the halls of the U.S. Congress.

The Afro-indigenous people of Honduras began organizing in 1979 to protect the fishing and farming rights of Garifuna communities along the Atlantic Coast. Tourism, land grabs for agro-fuels and climate change define their current struggles. Prioritizing the leadership of Afro-descendant women and youth, the Black Fraternal Organization of Honduras has built a movement that seeks to protect the natural resources which enables them to feed themselves and their communities. As important and deeply connected to their struggle for self-determination is their efforts to protect the culture of the Garifuna people. According to Coordinator Miriam Miranda: “Our liberation starts because we can plant what we eat. This is food sovereignty."

The Food Sovereignty Prize is a small but growing effort to call attention to those who struggle every day—not in the laboratories, but in the fields and on the land to produce food while protecting natural resources. As Ben points out, corporate control of every aspect of the food system is being met with an intensification of these grassroots efforts. “Our system of growing food is heavy, heavy, heavy dependent on petro-chemicals, on inorganic compounds … and it takes too much control out of the local community. Now, [this corporate-controlled system] might last for several decades, but in the end it won't last."

Those same companies Ben references are the ones who are both funding and often receiving the World Food Prize each year. The event has become a megaphone for primarily corporate interests in our global food system. The list of sponsors is a veritable line-up of the biggest and most influential. Monsanto, ADM, Bayer Cropscience, Syngenta, Walmart, Pepsico, Dupont—all put up significant dollars to back the prize and spread the message that the scaling up of laboratory-derived solutions (GMOs, patented seeds, petroleum-based fertilizers and pesticides, mono-cropping) is the only thing that will feed our growing population.

The Food Sovereignty Prize, by contrast, honors those grassroots leaders that tell a more compelling story of the true solution to climate change and hunger, backed by years of experiential knowledge rooted in a symbiotic partnership with the Earth and her resources that sustain us. The Food Sovereignty Prize helps us amplify the voices of these stewards of land, community, culture and democracy. It helps us tell the world that the lives of Black farmers matter to all of us who want to see an end to the exploitation of people, our environment and hunger.

Join us on Oct. 14 at 7 p.m. CST in Des Moines, Iowa for the Food Sovereignty Prize ceremony. You can watch it via below or follow the conversation with #FoodSovPrize.

Greenpeace: The Truth Behind the World's Largest Tuna Company