Grandparents Tell Gov. Hickenlooper Not to Frack Their Grandchildren’s Future 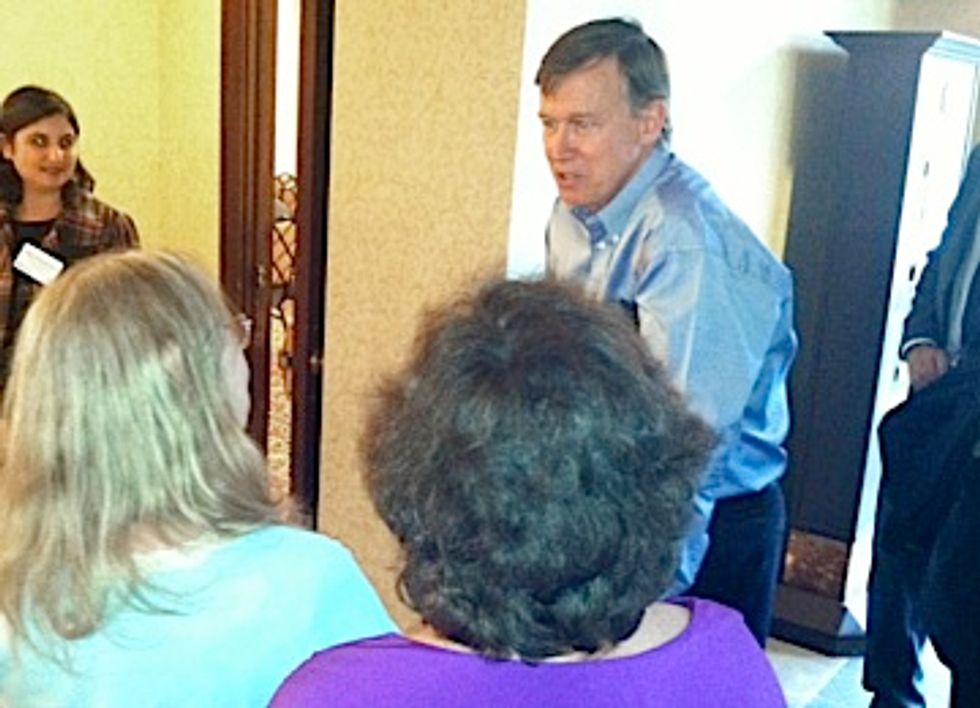 Concerned grandparents from across Colorado delivered a letter yesterday to tell Gov. Hickenlooper (D-CO) and other governors from across the country to say no to fracking and yes to a renewable energy future in celebration of National Grandparents’ Day. The delivery took place before Gov. Hickenlooper’s keynote address to the Western Governor’s Association Policy Forum on Shale Energy Development in Broomfield.

Kaye Fissinger of Longmont, Joan Muranata of Broomfield, Merrily Mazza of Lafayette and Sharon Carlisle of Loveland prepare to deliver a letter to Gov. Hickenlooper, calling on him to protect their children and grandchildren from fracking.

These grandparents voiced their concerns over the risks fracking, drilling and related activities pose to all Coloradans health, air, water, land, property values and their special concerns for their grandchildren and great-grandchild. They also demanded that Gov. Hickenlooper end his continued use of lawsuits to bully the people of Colorado to accept fracking next to their homes and schools.

“Yesterday I celebrated National Grandparents’ Day with my two grandchildren in Lafayette,” said Merrily Mazza, a retired corporate executive and current member of East Boulder County United. “Today, I’m here to tell Governor Hickenlooper to stop trying to force fracking next to our homes and schools with lawsuits. My grandchildren deserve a safe, healthy future in Colorado.”

Grandparents representing the five communities (Broomfield, Fort Collins, Loveland, Lafayette and Boulder) who will be voting to protect themselves from fracking this November participated in the letter delivery, as well as grandparents from Longmont, who’s community is currently facing two lawsuits from Gov. Hickenlooper in order to force fracking next to homes and schools in their city.

Kaye Fissenger and Joan Murananta deliver the letter from grandparents across Colorado to Gov. Hickenlooper.

Despite gathering thousands of signatures to exercise their right to vote in each of these communities, Gov. Hickenlooper has stated he will sue any community that protects themselves from fracking and has not spoken out against the attempts of the oil and gas industry to undermine Coloradans right to vote on fracking in these communities.

“Endangering the health of our grandchildren by contaminating air and water is unacceptable," said Joan Stern a grandmother with Our Broomfield. "We want to work to protect our communities from this dangerous practice. We are appalled by the lack of leadership in our state government.”

The Western Governor’s Association Policy Forum on Shale Energy Development does not include one voice from residents who have been directly impacted by fracking or have been sued by either Gov. Hickenlooper or the industry for exercising their democratic right to vote. Instead, the forum appears designed to coach governors and their staffs on how to deflect community concern effectively and use industry messaging to shut out any voices critical of fracking, drilling, wastewater disposal and its associated activities.

“This forum provides yet another disturbing example of how Governor Hickenlooper is the oil and gas industry’s leading cheerleader for fracking while he ignores the people who voted him into office in the first place,” said Kaye Fissinger, a great-grandparent, leading member of Our Longmont and a representative of Protect Our Colorado.