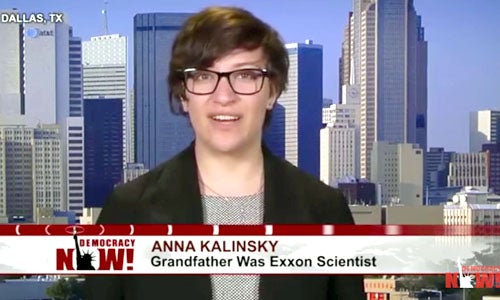 At its annual meeting in Dallas, Texas, ExxonMobil shareholders rejected a series of resolutions Wednesday calling for climate action, including resolutions backed by CalPERS, the California Public Employees’ Retirement System, as well as New York state Comptroller Thomas DiNapoli and the Church of England. Shareholders did pass a measure to let minority shareholders nominate outsiders for seats on the board, raising the possibility that a climate activist could someday become a director at Exxon.

It was the first Exxon annual meeting since a series of revelations that for decades the company covered up its own scientific findings linking rising carbon emissions to dangerous climate change. At the shareholders meeting, the granddaughter of a former Exxon scientist questioned the CEO of Exxon about the company’s record. We speak to the woman, Anna Kalinsky.

Nermeen Shaikh: At its annual meeting in Dallas, Texas, ExxonMobil shareholders rejected a series of resolutions Wednesday calling for climate action, including resolutions backed by CalPERS, the California Public Employees’ Retirement System, as well as the New York [state] Comptroller Thomas DiNapoli and the Church of England. Shareholders did pass a measure to let minority shareholders nominate outsiders for seats on the board, raising the possibility that a climate activist could someday become a director at Exxon. It was the first Exxon annual meeting since a series of revelations that for decades the company covered up its own scientific findings linking rising carbon emissions to dangerous climate change. At the shareholders meeting, the granddaughter of a former Exxon scientist questioned theCEO of Exxon about the company’s record. This is part of what she said.

Anna Kalinsky: It’s good to have the opportunity to speak to you. So, my name is Anna Kalinsky. And my grandfather, James F. Black, was a scientist for Exxon for over 40 years. He started with Standard Oil during World War II, later earned dozens of patents for Esso and, later, Exxon. In 1977, he briefed the company’s top executives on the scientific realities of climate change. He said that present thinking holds that man has a time window of five to 10 years before the need for hard decisions regarding changes in energy strategies might become critical, like you acknowledged on your slides. This is over 30, almost 40, years ago.

Amy Goodman: That was Anna Kalinsky, who is the granddaughter of James Black, who was a scientist for Exxon for over 40 years. We’re going to hear Rex Tillerson’s answer, the CEO of Exxon, in a moment. But first to Anna herself, who’s joining us now from Dallas along with 350.org co-founder Bill McKibben.

We welcome you both to Democracy Now! Anna McKibben—Anna Kalinsky, let’s begin with you. Talk about what your grandfather found as an Exxon scientist.

Anna Kalinsky: Absolutely. So, like I said, my grandfather worked for Exxon for about 40 years. And in 1977, he gave a presentation to top Exxon management. And he laid out very clearly that the planet was warming, that this was because of rising carbon dioxide levels in the atmosphere and that those levels were rising because of the burning of fossil fuels. And at the time, he told Exxon that humankind had five to 10 years to start really making the hard decisions regarding climate change or else the situation could become dire.

Nermeen Shaikh: And, Anna Kalinsky, how many other scientists at Exxon at the time, in the 1970s, were doing comparable research, research comparable to what your grandfather, James F. Black, did?

Anna Kalinsky: So, I don’t have an exact number for you, but we know that at the time there were other scientists at Exxon doing climate research and that other organizations, in addition to Exxon, were receiving similar briefings.

Rex Tillerson: We will continue to engage in the policy discussions, as we currently do, with a number of broad-based groups on all sides of these issues and we’ll continue to be active in the discussions legislatively in Washington and elsewhere, including through the IPCC, on what we think are thoughtful, sensible policy actions that accommodate both our need for economic growth as well as addressing these risks, which are going to be very, very daunting.

Amy Goodman: So that’s Rex Tillerson, the CEO of Exxon. Anna Kalinsky, your response to his answer to your question?

Anna Kalinsky: I find it incredibly frustrating. To say that we’re looking at all sides of the climate change issue is ignoring that there has been global consensus on the realities of climate change for years and that Exxon has now, at this point, had four decades of knowledge about climate change, has their own scientists working, who know about these sorts of things. And for CEO Tillerson to say that Exxon wouldn’t be taking decisive action either to cut ties with groups which deliberately spread climate change misinformation, groups like the American Legislative Exchange Council [ALEC] and that Exxon also, even though they acknowledged during their shareholders meeting that climate change is real and that burning of fossil fuels has an effect, that it was more important for them to focus on their immediate bottom line, it’s incredibly disheartening.

Nermeen Shaikh: Well, your grandfather, James F. Black, presented his climate research findings to Exxon executives in July 1977, as you pointed out to the Exxon CEO. He concluded by saying, quote, “There is general scientific agreement that the most likely manner in which mankind is influencing the global climate is through carbon dioxide release from the burning of fossil fuels. A doubling of carbon dioxide is estimated to be capable of increasing the average global temperature from 1 degree to 3 degrees centigrade, with a 10 degree centigrade rise predicted at the poles.” Anna, that was your grandfather’s report in 1977 to senior Exxon executives. So could you say a little about what you think the situation would be today, had Exxon executives listened to the advice of your grandfather?

Anna Kalinsky: Absolutely. And something I think that’s important to note is that Exxon actually did for a while take what my grandfather said seriously. He gave that initial briefing in 1977 and in 1978 Exxon had him give a similar briefing to a larger group. And for a while, they actually were funding climate change research. And for a few years, Exxon really was on the cutting edge of climate change science. And then, that spun around to the situation we’re at today, where Exxon publicly and anonymously is funding these groups that spread climate change misinformation. But I think that had my grandfather been listened to back in the ’70s and had an organization like Exxon really taken action, we would be much closer or already at a much more greener climate, an economy of greener energy sources instead of our continued reliance on fossil fuels.

Amy Goodman: Can you talk about the petition you delivered at the Exxon shareholders meeting and when you came to understand, as you were growing up, how significant your grandfather was in this whole climate change issue in exposing the large fossil fuel companies, like Exxon and how you decided to speak out yourself?

Anna Kalinsky: So, I came down as a volunteer with ClimateTruth.org, which is a group that works against the spread of climate change denial, climate change disinformation. And when I went to the shareholders meeting, I delivered a petition with almost 35,000 signatures asking—or demanding, rather, that Exxon leave ALEC, that they cut associations with ALEC, one of those groups which spreads climate change misinformation.

But as for my relationship with my grandfather growing up, he died a few years before I was born, so I never actually had the opportunity to meet him. But I was the only scientist growing up in my family. I graduated last year with an undergraduate degree in chemistry, just like he did. And so, he was always a mythological sort of figure for me. He was the person where my love of science came from. And so, I grew up with stories from my mother about things that my grandfather did, his research. The climate change was one of the things that I learned about.

And then, this past fall, when InsideClimate News started publishing the articles about how Exxon has known about climate change since the ’70s and how he was featured very strongly in that, it was something that gave me a lot of pride. I was really excited that my family was a part of this. And as time has gone on, you know, I’ve continued to feel that way. So, when ClimateTruth.org asked me to come down here, I was really proud to carry on the family legacy of speaking out against Exxon and speaking kind of on behalf of science and not political rhetoric.