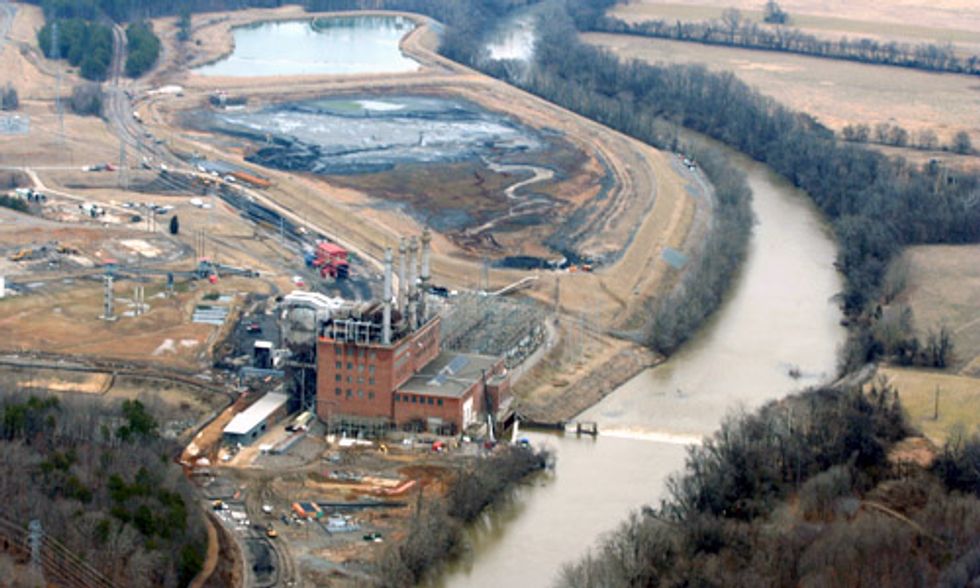 Late last night, North Carolina Governor Pat McCrory released his so-called “Comprehensive Coal Ash Action Plan” claiming the legislation will “close loopholes in state law to strengthen the state’s ability to regulate coal ash ponds.” But comprehensive review of the proposed plan conducted by environmental experts and public interest attorneys reveals that it categorically fails to live up to the hype and meaningfully protect North Carolinians from poisoned drinking water as well as another tragic and toxic coal ash spill. Despite repeated requests by news media and environmental groups the Governor refused to release copies of the plan until 6:38 p.m.—after deadlines for most news organizations.

“The bill is riddled with loopholes that benefit Duke to the detriment of the health and safety of North Carolinians and their environment,” said Earthjustice attorney Lisa Evans.

The Comprehensive Coal Ash Action Plan would allow Duke Energy to continue poisoning North Carolina, South Carolina and Virginia drinking water sources with a witch’s brew of toxic heavy metals including arsenic, cadmium, chromium, lead, mercury and selenium because it allows Duke Energy to cover up coal ash ponds with dirt and leave them unattended and unmonitored on the banks of nearby rivers and lakes. The bill is a tremendous waste of time when people and the environment are threatened throughout the state. North Carolina citizens desperately need real solutions—not a papering over of the problem.

McCrory’s proposal bends over backwards to accommodate Duke’s discretion at every turn, providing almost infinite options for closure and leniency concerning timing, and fails to set clear deadlines and strict environmental and public health standards that Duke would need to meet. For example, there are no deadlines for initiating or completing closure or for sampling wells within a half-mile from coal ash dump sites. In general, most deadlines are left to the discretion of Duke; the few deadlines that are mentioned include a clause that allows the Department of Environmental and Natural Resources (DENR) to waive the deadline.

The bill appears designed to moot enforcement action that may actually result in real deadlines and real solutions. Whole sections of the proposal were copied verbatim from the woefully inadequate and uniformly rejected proposed consent agreements for the Asheville and Riverbend coal-fired power plants. This language was crafted after months of close coordination between the Governor’s administration and Duke Energy. They are now the subject of criminal investigation.

“This proposed bill does not require a cleanup and asks the legislature and the public to trust DENR and Duke to decide what to do with Duke’s polluting coal ash pits,” said Frank Holleman, senior attorney at the Southern Environmental Law Center. “The law currently requires Duke to clean up its coal ash pollution and the legislature and the public should not be asked to trust the two organizations which are currently appearing before a federal criminal grand jury about their coal ash activities.”

When the consent agreements were originally proposed by Duke and DENR, approximately 5,000 North Carolinians and more than 30 community groups unanimously opposed them as inadequate to protect public health and the environment.

“This is just another blatant example of the governor completely ignoring the voters and tax payers of North Carolina by making a gratuitous attempt to exempt his former employer from any real or meaningful requirements to clean up their toxic ash ponds,” said Donna Lisenby, Global Coal Campaign coordinator for Waterkeeper Alliance.

Judge Rideway recently ruled that North Carolina law already gives DENR the authority—and the duty—to require Duke Energy to take immediate action to eliminate the source of its groundwater pollution. That state court ruling proves the governor’s proposal to be a thorough waste of time.

“The governor is attempting to negotiate the terms of a weak consent agreement in the legislature. This will only serve to make the bill vulnerable to further weakening by Duke's lobbying machine,” Lisenby added.

“The bill is riddled with loopholes that benefit Duke to the detriment of the health and safety of North Carolinians and their environment,” said Earthjustice attorney Lisa Evans. “If the goal is to close and clean up the state’s dangerous, leaking and unstable coal ash ponds, this plan is an abject failure.”

“The governor’s current proposal makes clear that he is happy to let Duke remain in the driver’s seat rather than take charge and use the authority he already has to address coal ash pollution,” said Julie Mayfield, an attorney and co-director of the Western North Carolina Alliance. “Duke and DENR also continue to act as if environmental advocates are not part of this debate. In fact, we started this debate, and the sooner Duke and DENR realize we will be part of the solution, the sooner the environment and people will be protected from coal ash pollution."

Check out these four slideshow to get a closer look at the devastation caused by Duke Energy: