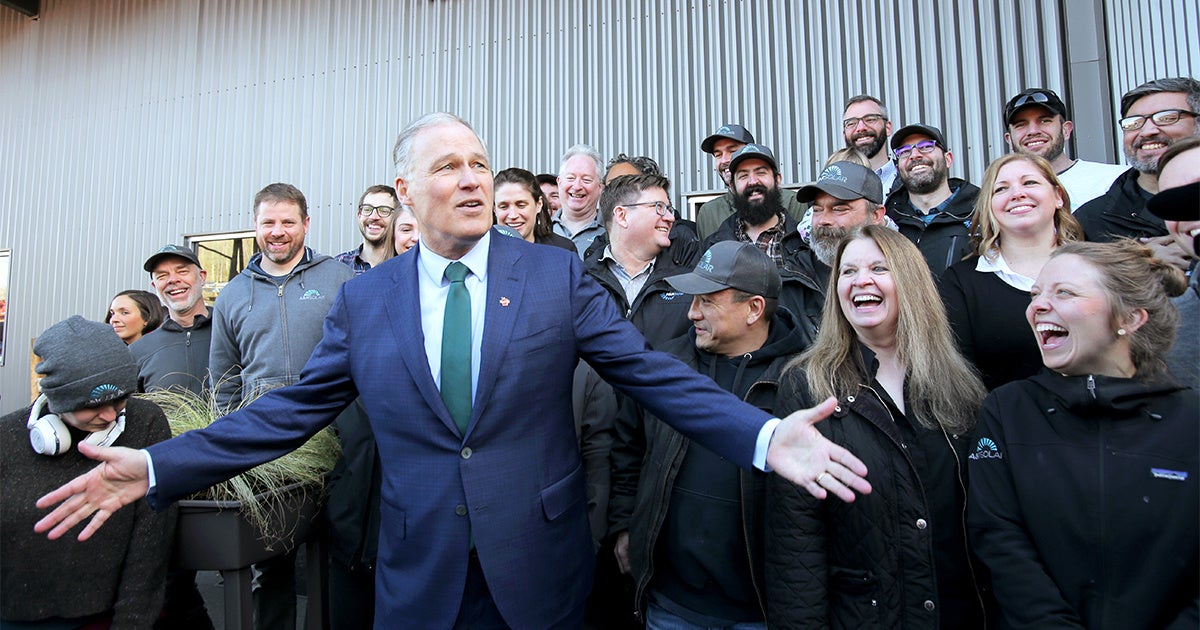 Washington Gov. Jay Inslee entered the 2020 Democratic primary Friday as the first presidential contender to base his campaign primarily around fighting climate change.

“I’m Jay Inslee and I’m running for president because I’m the only candidate who will make defeating climate change our nation’s number one priority,” he said in a video announcing his run.

VIDEO: This is our moment, our climate, our mission — together, we can defeat climate change. That's why I'm running for president. Join #OurClimateMoment today https://t.co/zg8ILGyk0Z pic.twitter.com/pUZVxyzfc5

Inslee is the first governor and 13th candidate to enter a crowded primary field, BBC News reported. Of the 13 candidates, five others have embraced a Green New Deal—a plan to transition to 100 percent renewable energy while promoting green jobs and greater equality, The Washington Post’s Energy 202 pointed out. But Inslee has a unique focus on climate: it was the only thing he mentioned in the video announcing his run, and he launched his campaign at a solar panel factor, BBC News reported.

“Nobody until Inslee has flatly said, this is my issue,” Yale Program on Climate Change Communication Director Anthony Leiserowitz told The Energy 202.

In an interview with Vox, Inslee said it was time for a candidate to do just that.

“The Center for American Progress [Action Fund] did a poll in the first four primary states among likely Democratic voters, and for the first time, they ranked climate change as the number one priority, in a dead tie with health care. This is a pretty significant dynamic. And obviously, it bodes well for my candidacy!” he said.

Inslee has a long-running commitment to sustainability. The League of Conservation Voters called him “our nation’s greenest governor.” During his two terms as governor, he has worked to promote electric vehicles and ferries, fund clean energy research and pass legislation requiring Washington State utilities to get more energy from renewables. His policies have partly been the reason that Washington ranks just below California in rates of adopting electric vehicle adaption and generating renewable energy, according to The Energy 202.

In 2007, he also co-wrote a book with Bracken Hendricks that prefigures the Green New Deal. Apollo’s Fire: Igniting America’s Clean Energy Economy, argued for a transition away from fossil fuels coinciding with an increase in green jobs. When Vox’s David Roberts asked if he endorsed the Green New Deal, he had this to say:

Well, I don’t get to vote on it, but I am totally in sync and believe that it is exactly what I have said for decades. I think these aspirational goals are appropriate to the time and the scale. I love the fact that it is embracing economic justice issues as well. I think we have come to understand more about how marginalized communities have been the victims of climate change.

However, some of his constituents say his record does not support his rhetoric.

Zero Hour founder and 17-year-old Seattle climate activist Jamie Margolin was one of 12 young people who sued Inslee, arguing Washington was not doing enough to reduce greenhouse gas emissions, Grist reported. She criticized Inslee for fighting the youth lawsuit, which was dismissed in August 2018, and not listening to indigenous communities when approving a liquid natural gas terminal in Tacoma.

Inslee has also failed in attempts to pass a carbon tax, both in the legislature and via a voter initiatives, the most recent of which was rejected in November 2018 after oil companies paid a record $30 million to defeat it

In response, Inslee has shifted course and is working with Washington State Democrats to pass five pieces of legislation that would bring state emissions to 25 percent below 1990 levels by 2035 by improving clean fuel and building energy efficiency standards. The Energy 202 reported, adding that his flexibility may be to his advantage:

That kind of nimbleness, moving from one proposal to the next, may be necessary in Washington, D.C., which saw the high-profile failure to pass a cap-and-trade program early in President Obama’s first term.

In addition to climate change, Inslee told Vox he was passionate about criminal justice reform, raising the minimum wage, ending the death penalty, protecting net neutrality and reproductive rights. He also wants to end the Senate filibuster, which the Energy 202 pointed out stopped a 2009 cap-and-trade bill from passing at the national level.

“I believe the filibuster is an artifact of history that no longer fits American democracy,” Inslee told Vox. “It is such an impediment to our ability to respond to multiple challenges. We know how it would prevent climate change legislation of any dimension from moving through the Senate.”