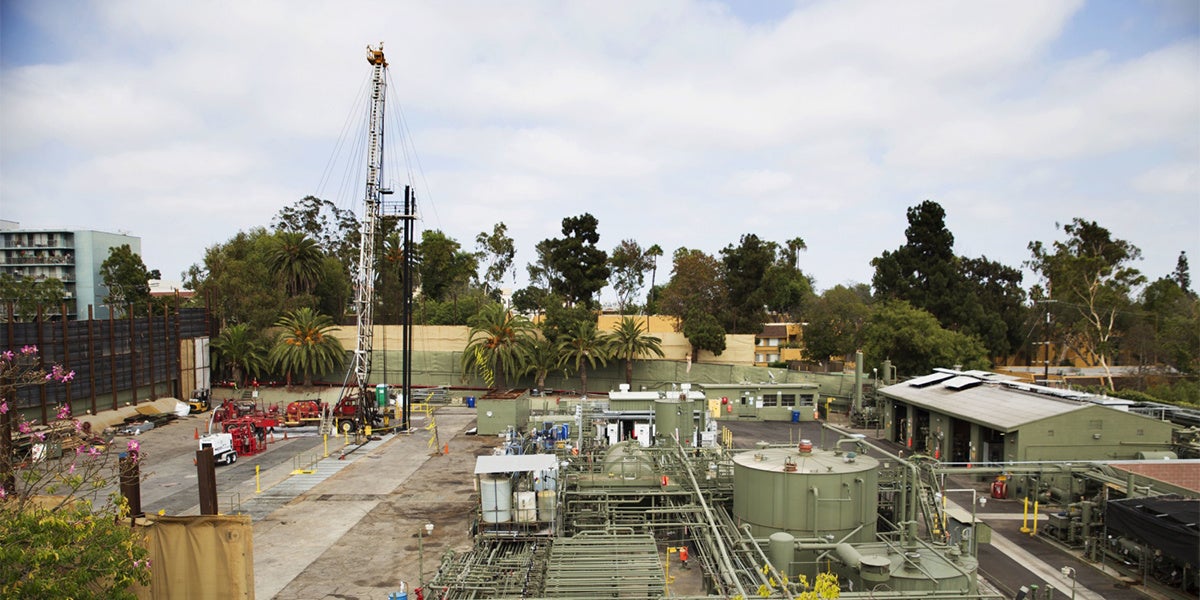 California Gov. Jerry Brown is gearing up to host leaders from state, tribal, and local governments, business and citizens from around the world at a Global Climate Action Summit in San Francisco this September. His goal is to “inspire deeper commitments” in support of the Paris agreement goals. He has emphasized that, on climate, “so far the response is not adequate to the challenge” and “no nation or state is doing what they should be doing.”

A new report released by Oil Change International in partnership with 14 other environmental justice and climate groups shows that California will fall short of its own commitment to climate leadership unless it embarks on a managed phase-out of its oil and gas production. If Gove. Brown is serious about marshaling a response that is adequate to the challenge, he must take steps to limit fossil fuel production as part of California’s suite of climate policies.

Here’s what we lay out:

Climate Leadership is Being Redefined

California Has No Plan for a Just Transition Off Oil Extraction

If you don’t live in the heavy extraction zones of California—centered in Kern and LA Counties—you may not know that California is a top oil producer in the U.S., and has been for over a century. Under the Brown administration, the state has issued more than 20,000 new permits for drilling to oil companies, enabling the industry to keep tapping more fossil fuels. 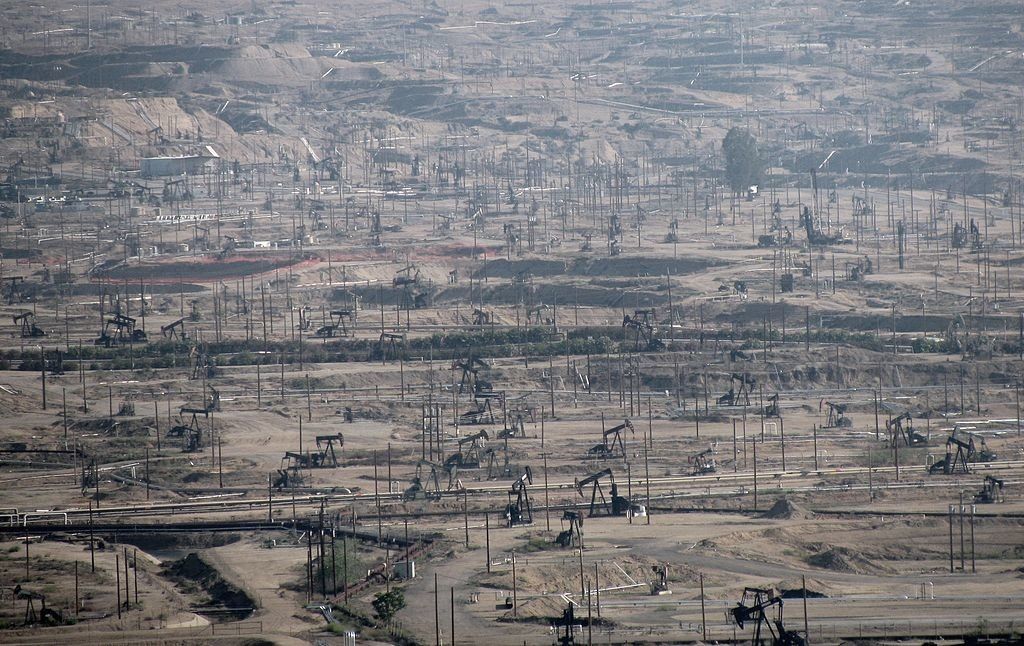 California currently has no policy in place to manage its own transition off oil extraction. This is not only inconsistent with the Paris goals, but exacerbates environmental injustice. A significant portion of extraction is occurring directly in and around neighborhoods—and disproportionately in communities of color.

Our new report examines straightforward policy steps California can take to limit new production and begin a managed ramp-down of existing oil and gas wells. If California takes these steps, it would become the first major oil and gas producing jurisdiction to do so, setting a global precedent for climate leadership for others around the world to emulate.

We show that the permitting of new oil and gas extraction wells in California could enable 560 million barrels of new oil production from 2019 through 2030, which would dig the world into a deeper carbon hole at a time when we need to be winding down the fossil fuel industry instead. This new production could lead to more than 360 million metric tons of CO2 equivalent, increasing emissions associated with California oil production by 55 percent over the next 12 years. By ceasing such permits, California would limit new fossil fuel production, as required by the Paris goals.

2. Implement a statewide health and safety buffer zone in which existing wells are phased out as quickly as possible.

In partnership with the FracTracker Alliance, we found that nearly 8,500 active oil and gas wells across California operate within 2,500 feet of homes, schools and hospitals—a proximity linked to the greatest exposure to toxic air pollution. These wells, which are disproportionately located in some of the state’s most polluted communities, were responsible for 12 percent of statewide oil production in 2016. STAND-L.A., an alliance of environmental justice groups, is calling for a setback law in the city of LA that would phase out operation of wells within 2,500 feet of sensitive areas. Enacting a similar policy statewide would begin a proactive managed decline of existing extraction in a way that prioritizes the health of historically overburdened communities. 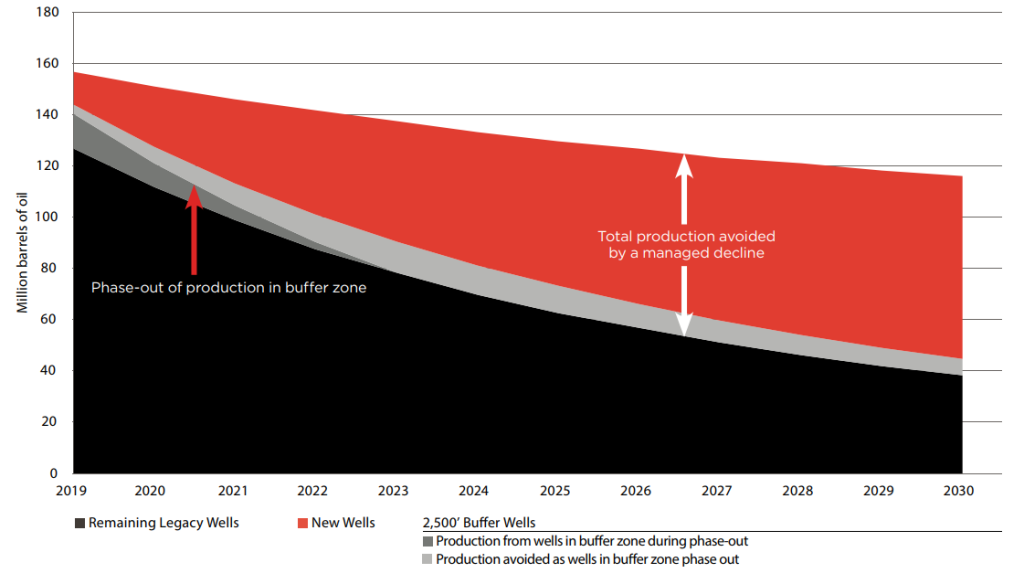 Projected California Oil Production with and without New Wells and a 2,500′ Health Buffer Zone, 2019-2030.Oil Change International and FracTracker Alliance analysis, using historical data from the Division of Oil, Gas, and Geothermal Resources and DrillingInfo

3. Develop a plan for the managed decline of California’s entire fossil fuel sector as part of the state’s climate initiatives.

All in all, the oil production avoided by halting new well permits combined with phasing out wells within 2,500 feet of sensitive areas could total 660 million barrels from 2019 through 2030. To put this amount in context, meeting Gov. Brown’s goal to reduce oil use in cars and trucks by 50 percent by 2030 would save about 430 million barrels of oil over the next 12 years, compared to reference-case projections. If California does not limit production, it could add a greater amount of new oil supply to the market, undermining the effectiveness of demand-side measures. Ultimately, California should “cut with both arms of the scissors“—acting aggressively to reduce oil supply, consumption and related infrastructure like refineries and export terminals together—to maximize the effectiveness of its climate policies.

4. Develop a just transition plan that protects people whose livelihoods are affected by the economic shift.

Leadership in managing the decline of fossil fuel production must include a commitment to a just transition. This means providing decent work and social protection to workers and communities affected by the shift to a climate-safe economy, and investing in their vision of a brighter future.

The groundwork for a just transition must be laid through a process of democratic social dialogue and planning between employers, workers, unions, frontline communities and organizations, and local and state agencies. To facilitate this planning process, we recommend that California establish a Just Transition Task Force.

Implementing a just transition plan will also require significant dedicated resources. We propose one solution for raising funds from the oil industry itself: A 5 to 10 percent Just Transition Fee on the value of oil production could generate $3.5 to $6.9 billion in revenue from 2019 through 2030. These funds, to be dedicated exclusively to just transition needs, could cover basic social protection costs for workers like wage replacement and college tuition before phasing out with the decline of extraction.

As Gov. Brown has acknowledged, the world currently faces a dangerous gap between the ambition of current pledges and action, and what’s required to meet the Paris goals. California would set an urgently needed example of global leadership by becoming the first major oil and gas producer to establish policies to phase out its oil production in line with climate limits. Such policies would also help protect the health of local communities in California being unfairly harmed by extraction now.

Gov. Brown can act: The state has clear regulatory authority both to stop issuing permits for new wells and to institute a health and safety buffer zone. California has the resources and moral responsibility to act. Now, will Gov. Brown and other state leaders show the political resolve to act—to say “no” to oil and gas company plans and show the world how to manage a fair and equitable transition away from oil extraction?