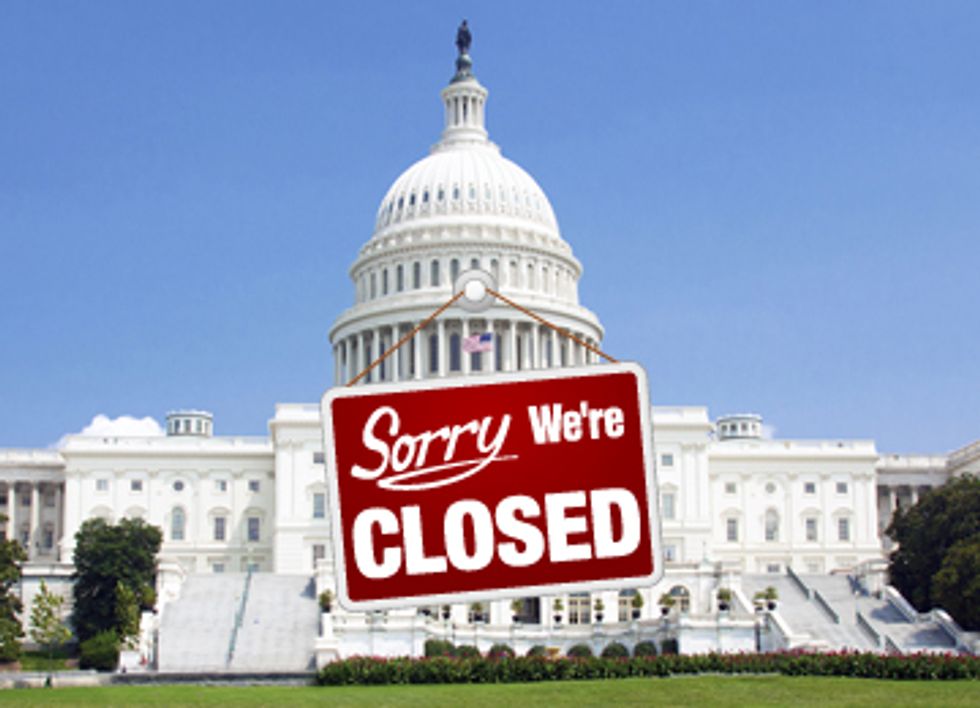 What’s worth denying even a single child with cancer available and potentially life-saving treatment? Nothing—in my book.

By shuttering the federal government, the Tea Party wing of the House of Representatives has done exactly this. The government shutdown means an estimated 30 children a week—10 of whom have cancer—cannot take part in clinical trials, meaning experimental treatments, at the National Institutes of Health (NIH).

"This is the place where people have wanted to come when all else has failed," NIH director Francis Collins told the Associated Press. "It's heartbreaking."

Scientists with the federal Centers for Disease Control and Prevention (which is on the front lines in protecting the public from communicable diseases) have been sent home. I suppose we can all pray that no life-threatening viruses reach epidemic proportions while Congress fiddles.

Before changing their voicemail messages and shutting off the lights in the lab, Centers for Disease Control (CDC) scientists were anxiously chasing outbreaks of, among other things, naegerlia fowleri, a “brain-eating amoeba” that has already killed a four-year old in Louisiana, and the parasite cyclospora that attacks the stomach and has sickened at least 645 people in 25 states. The CDC has also closed its flu program—just before flu season.

"I usually don't lose sleep despite the threats that we face, but I am losing sleep because we don't know if we'll be able to find and stop things that might kill people," CDC director Dr. Tom Frieden told CBS News.

Most employees at the U.S. Environmental Protection Agency (EPA) are not working on important programs meant to protect and clean up drinking water, air, streams, rivers, lakes and land.

The U.S. EPA’s work investigating toxic chemicals in consumer goods and possible misuses of pesticides will also be interrupted.

Huffington Post’s Kate Sheppard reported that the EPA suspended cleanup at 505 of 800 Superfund sites in 47 states. Again, courtesy of the wingnuts in Congress.

The Food and Drug Administration has stopped most regular food inspections, including those conducted on imported foods. Joe Satran of the Huffington Post reported that “for every day the government doesn't work, approximately 80 food facilities will go uninspected. If the shutdown lasts until Oct. 17, 960 facilities may go without U.S. inspections.”

Oct. 17 is when the U.S. hits its debt limit and will default if Congress doesn’t raise the debt ceiling. If it doesn’t and the government stays closed, the economic recovery will be drastically set back with many economists predicting another recession.

There’s more. The U.S. Department of Agriculture has terminated funding for the Supplemental Nutrition Program for Women, Infants and Children. This program serves 9 million mothers and children, some 53 percent of infants born in the U.S.

While “closed” signs in front of monuments and parks are the most visible evidence of an intractable Congress, harming the health of young children is far more dire. Those lawmakers who are backing the shutdown also object to expanding healthcare coverage to millions under the Affordable Care Act, including kids.

So if you’re not a federal employee or a person seeking a last-ditch cancer treatment, if you don’t care about the safety of food or drinking water, don’t live near a toxic dump site or worry about those who do, don’t think about clean air, hungry babies or contracting a communicable disease, I suppose you can ignore the impacts of the shutdown.

Maybe you can join some of those who put us in this fix and knock back a few drinks instead.