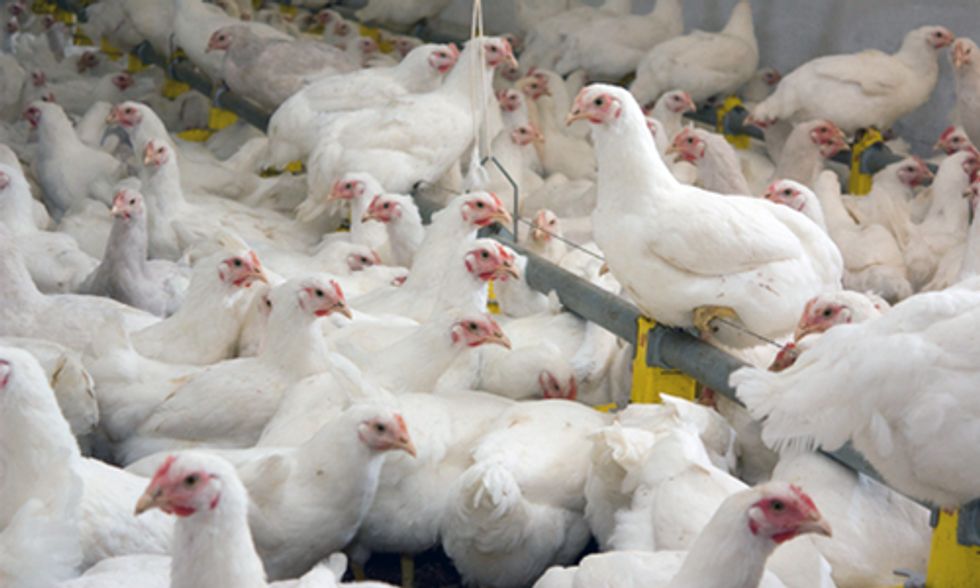 Let's talk about America's farm­grown terrorism epidemic. Back on Sept. 11, nearly 3,000 people lost their lives in the attacks on the World Trade Center, Pentagon, and in Shanksville, Pennsylvania. Since 9/11, our government has spent more than $7.6 trillion on military and homeland security operations in response to the deaths of those roughly 3,000 souls. Now, compare that to the fact that each year, 23,000 Americans die from antibiotic-resistant infections, and another 2 million get sick. That's the equivalent of nearly eight 9/11's per year. But our government isn't doing a thing about it.

In 2011 alone, nearly 30 million pounds of antibiotics were purchased by Big Agriculture, to promote growth in the animals, and to reduce the spread of disease in the horrific factory ­farm conditions. Photo credit: Shutterstock

Each year, Big Agriculture feeds millions and millions of pounds of antibiotics to factory farm animals, all to slightly increase their profits by plumping up their meat. In 2011 alone, nearly 30 million pounds of antibiotics were purchased by Big Agriculture, to promote growth in the animals, and to reduce the spread of disease in the horrific factory ­farm conditions. That 30 million pounds is a staggering four times the amount of antibiotics that were prescribed to humans that year.

These are otherwise healthy animals, but they're getting dosed daily with low­ levels of antibiotics anyway. As a result, this widespread and unnecessary use of antibiotics in factory­farm animals is creating a major public health crisis here in the U.S by breeding antibiotic resistant infections caused by bacteria referred to in the media as superbugs.

But rather then enforcing regulations already in place to control the use of antibiotics in factory­ farm animals, our federal government is bowing to the interests of Big Agriculture, and is continuing to let the abuse go on.

Just last week, the U.S. Second Circuit Court of Appeals ruled that the Food and Drug Administration could leave an antibiotic that's used in animal feed on the market, even though the dangers associated with that antibiotic are widely known, including the increased risk of antibiotic resistance infections jumping to human beings. Basically, the court gave Big Agriculture the go­ahead to continue pumping millions and millions of pounds of antibiotics into poultry and livestock, with no concern for public safety.

So, why should Americans care about this? Well, for starters, Americans eat a lot of meat. And the superbugs and antibiotic­resistant bacteria that are bred on factory farms very easily make their way into our food system.

For example, last year, a drug­resistant salmonella outbreak tied to chicken from Foster Farms sickened more than 600 Americans, and that outbreak is still getting worse today. And if that wasn't bad enough, these antibiotic­resistant superbugs also get into our water supply, and into soil for crops. The situation is so dire that, speaking about antibiotic resistance, Dr. Thomas Freidman, director of the Centers for Disease Control, said that, "If we don't act now, our medicine cabinet will be empty and we won't have the antibiotics we need to save lives."

If 23,000 Americans are already dying from superbugs and antibiotic­resistant infections each year, just imagine how much worse it could get as this antibiotic abuse continues. We could soon have a full­blown pandemic on our hands. But it doesn't have to get worse. We can stop this farm­grown terrorism right now, andsave millions of lives.

Big Agriculture says that slashing its use of antibiotics will hurt all of us in the form of higher prices at the supermarket, but that's simply not the case. As Ruth Reichl points out over at The New York Times, "Although many industrial farmers claim that cleaning up their act will cost the rest of us at the cash register, responsible producers from Missouri to Denmark are already raising healthy livestock and poultry at competitive prices without the use of unnecessary drugs."

Reichl highlights the story of Russ Kremer, a fifth­generation pork farm in Missouri, who, after nearly being killed by an antibiotic­resistant infection on his own farm, decided to do things the all natural way. He lets his pigs roam free, and doesn't have to stuff them full of antibiotics, because they're not living in squalor. And, thanks to competitive prices, his meat is bought by companies like Chipotle and Costco.

So Big Agriculture's "higher meat prices" argument is complete bologna. Pun intended. The use of antibiotics on factory farms is all about profits for Big Agriculture, But, with 23,000 Americans dying each year as a result, it's time to start putting the American people ahead of profits.

Meat producers and sellers across the country need to say "no" to more superbugs. No animals on factory farms should ever be given antibiotics, unless diagnosed as sick by a veterinarian. And while we're at it, we need to work harder to close down Washington's revolving door, which encourages employees in government agencies like the FDA to get bought off by corporate interests and then turn a blind eye to corporate abuse.

We have a right to eat food that's not going to kill us.