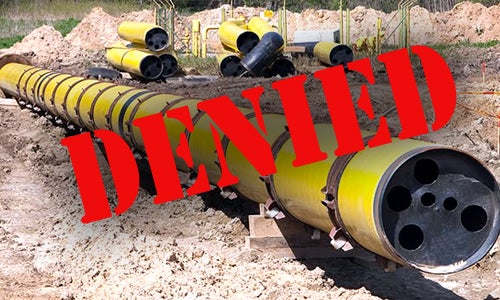 In a win for climate activists and the anti-fracking movement, and a blow to fossil fuel polluters and the federal regulatory agencies that enable them, the New York State Department of Environmental Conservation (DEC) denied a key permit to companies seeking to build a 124-mile fracked gas pipeline. 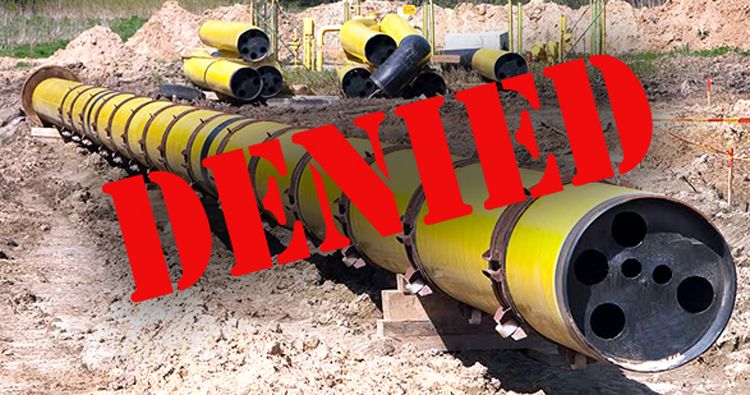 The Constitution Pipeline Project—a joint venture between four oil and gas companies—was proposed to transport fracked natural gas from Susquehanna County in Pennsylvania through Broome, Chenango, Delaware and Schoharie counties in New York to existing interstate pipelines. The pipeline route would have crossed hundreds of streams and wetlands, including those supplying drinking water to families along the proposed route. Using the power granted under the Clean Water Act, DEC officials rejected the companies’ permit application, citing damage the project would do to water supplies along the pipeline route.

“Today is an incredible Earth Day! Thank you again to Governor Cuomo and the Department of Environmental Conservation for putting the protection of our precious water and the public health and safety of New Yorkers ahead of the special interests of the oil and gas industry,” Mark Ruffalo, advisory body member of New Yorkers Against Fracking, said. “This is what real climate leadership looks like.”

Last month FERC gave the go-ahead to pipeline developers to clear-cut 20 miles of trees along the pipeline’s planned route through Pennsylvania. Pointing to the fact that New York State had not yet issued a permit, Earthjustice and other environmental groups called FERC’s move premature and illegal. New York’s rejection of the project today bolsters support for criticism of FERC as an agency that rubber stamps fossil fuel infrastructure projects.

The DEC’s decision comes as world leaders gathered in New York City to sign the historic Paris climate agreement. More than 170 countries, including those responsible for the bulk of the world’s climate pollution, signed the commitment to limit global temperature rise to 1.5 degrees.

Here’s what Earthjustice attorney Moneen Nasmith had to say about today’s announcement:

“The 124-mile Constitution pipeline, planned to run through five counties and two states, and hundreds of waterways is the sort of massive fossil fuel investment that would have locked our region into continued extraction and burning of fossil fuels and irreparably damaged precious water resources at a time when we need instead to be protecting these resources and speeding the transition to 100 percent renewable energy for all.

“World leaders and our leaders in New York State are doing what’s necessary. Unfortunately their efforts are undermined by rogue agencies like the Federal Energy Regulatory Commission which is failing to do its job and evaluate the environmental and climate impacts of the massive fossil fuel infrastructure projects it approves. FERC is an outlier agency that, with every day, is exposed as being drastically out of step with its peers. It’s time for fossil fuel industry enablers and apologists to step aside and let the rest of us continue the work necessary to solve the climate crisis and transition our society to 100 percent renewable energy.”

“Just a year after his monumental decision to ban fracking statewide, Cuomo has clearly embraced the urgings of thousands of grassroots activists: Clean, renewable energy is the only responsible path forward for New York. This latest act by the governor against fracked gas infrastructure sets a bold example for all public officials in America: Environmental leaders don’t frack, and they don’t tolerate new fracking infrastructure either.

“The Cuomo administration set a goal of reducing greenhouse gas emissions 80 percent by 2050. The state would not be able to meet that by swapping out one fossil fuel for another. That’s what new pipelines and gas-fired power plants would do—and why rejecting the Constitution pipeline was the only sensible option.”

The world needs maple syrup, not climate chaos: 7 Arrested at 'Pancakes Not Pipelines' Protest at FERC https://t.co/Ba3W3KFWea via @ecowatch