Gov. Cuomo Greeted by Hundreds of Anti-Fracking Protestors in Ithaca 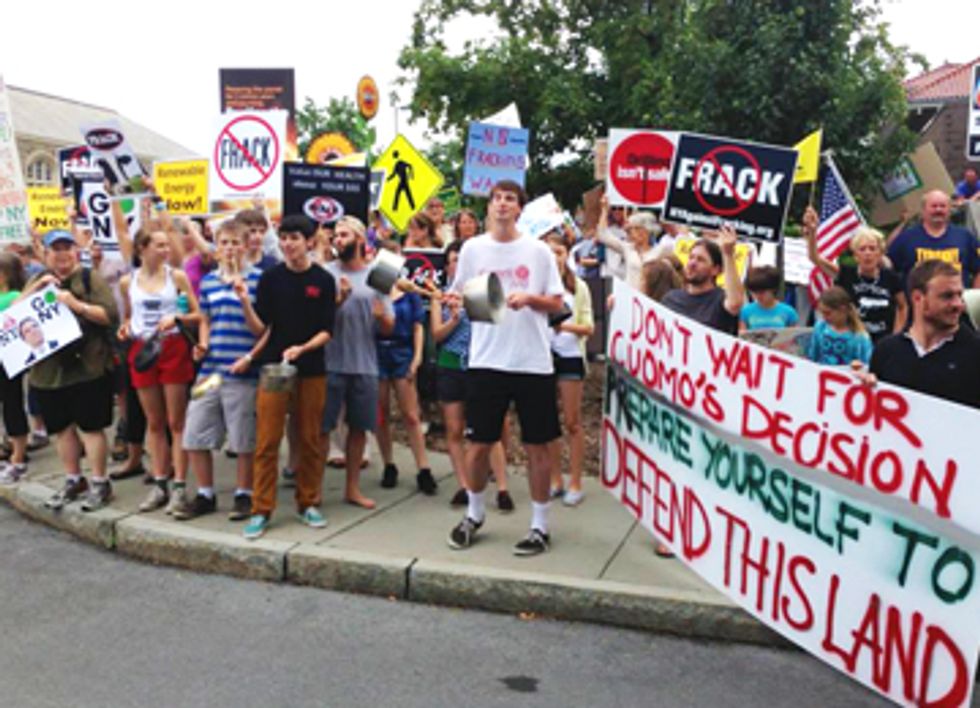 Hundreds of residents rallied against fracking and for renewable energy outside of Gov. Cuomo’s speech in Ithaca, NY, today with just hours notice of the Governor’s appearance. The concerned citizens urged the Governor not to put New York’s clean water, air, environment and economy at risk by allowing fracking. Further, they urged the Governor to aggressively invest in renewable energy, which would bring sustainable, good jobs and economic development to New York State without jeopardizing people's health and existing jobs like fracking would.

"Governor Cuomo must reject fracking because it would contaminate our clean water, poison our air and undermine our economy including agriculture, tourism and small businesses" said John Armstrong of Frack Action, an Ithaca resident."Science overwhelmingly shows that fracking cannot be done safely and that it would only lead to polluted water and ruined communities, just as it has in Pennsylvania and many other states. We urge Governor Cuomo to make New York State a national leader by moving us forward to a 21st century renewable energy economy that provides long-term, good jobs, not the dirty fossil fuels of the past that will only bring destruction and toxic jobs mostly for out-of-state workers.”

“The facts, science, and an overwhelming citizen’s movement of New Yorkers insist that Governor Cuomo bans fracking. Unprecedented numbers of business owners, farmers, health professionals, vintners and New Yorkers from all walks of life are speaking out against fracking because it threatens our water, air and way of life," said Sarah Kelsen of New Yorkers Against Fracking, also an Ithaca resident.

"We are gathered here today to give Cuomo a foreshadowing of the resistance that fracking, if approved, will face. If he is wise, he will listen to the people and not allow fracking in New York,” said Sam Law, an Ithaca Resident and organizer with Shaleshock and Finger Lakes Action Network.

Gov. Cuomo was in Ithaca for a 2:15 p.m. speech at Friends Hall, Cornell University. The rally began outside of the event at 1:30 p.m.

Independent observers have noted that the gas industry cannot be trusted when it describes fracking as safe. A recent investigation by the Times Tribune in Pennsylvania revealed many cases of water contamination from fracking.  And a recent study showed that fracking emits significant amounts of methane—a major contributor to climate change. A recent peer-reviewed study by Duke University in the renowned Proceedings of the National Academy of Sciences linked fracking with water contamination in Pennsylvania.

A recent peer-reviewed study detailed a plan for New York State to get to 100 percent renewable energy by 2030.

SHARE YOUR THOUGHTS BELOW: If New York State can become 100 percent renewable by 2030, could the whole country?