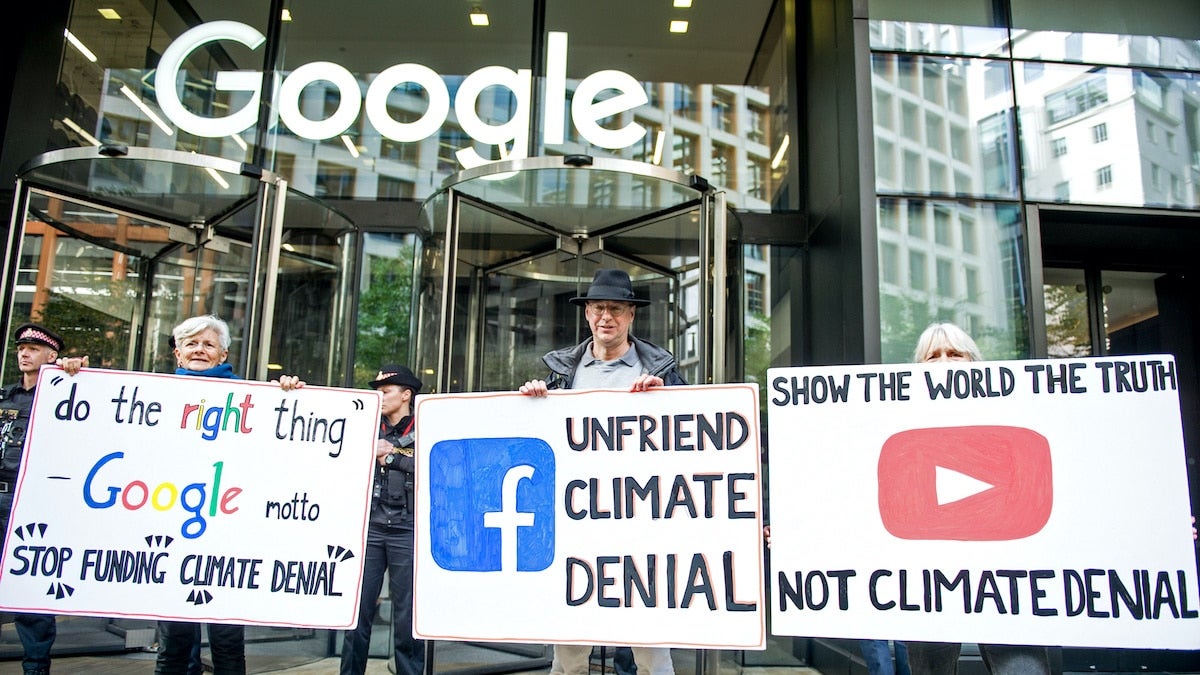 Tech behemoths Google and Facebook have upped their respective pledges to the environment, joining the ranks of Apple and Microsoft. Earlier this year, Microsoft pledged to go carbon negative by 2030, meaning it will account for all the carbon it has ever produced and add enough mitigation to counteract its effect.

Now Google is following in Microsoft’s footsteps and going one step further. The tech giant pledged to be carbon neutral in 2007 and has made an investment to match all of the electricity it uses with renewable energy. The company is now claiming that it has purchased enough carbon offsets to bring its carbon footprint dating back to the company’s founding, according to a blog post by Sundar Pichai, the CEO of Google and Alphabet.

“The science is clear: The world must act now if we’re going to avert the worst consequences of climate change,” Pichai wrote. “We are committed to doing our part. Sustainability has been a core value for us since Larry and Sergey founded Google two decades ago.”

Additionally, the company will become the first to commit to run entirely on carbon-free energy in all of its data centers around the world. Data centers are intensive energy consumers.

“This is far more challenging than the traditional approach of matching energy usage with renewable energy, but we’re working to get this done by 2030,” Pichai wrote. He added, “This is our biggest sustainability moonshot yet, with enormous practical and technical complexity. We are the first major company that’s set out to do this, and we aim to be the first to achieve it.”

To achieve the ambitious moonshot, Google will pair wind and solar energy together and it will use its robust artificial-intelligence to predict its future electricity demands, as the BBC reported.

“Today’s announcement, combined with Google’s promise in May to no longer create artificial intelligence solutions for upstream oil and gas exploration, shows that Google takes its role in combating climate change seriously,” said Elizabeth Jardim, senior corporate campaigner at Greenpeace USA, according to the BBC.

In a move that follows the lead of industry leaders, Facebook announced that it will achieve net-zero carbon emissions by 2030. It’s an ambitious goal, but far behind Apple, Microsoft and Google on its climate commitments, as The Guardian reported.

“Facebook’s global operations will achieve net-zero carbon emissions and be 100 percent supported by renewable energy. We are also setting an ambitious goal to reach net-zero emissions for our value chain in 2030,” wrote its director of sustainability, Edward Palmieri, in a blog post, as The Irish Times reported. Facebook houses its data centers for Facebook, Instagram and WhatsApp in Ireland.

“Over the next decade, Facebook will work to reduce carbon emissions from our operations and value chain, including by working with suppliers on their own goals, helping the development of new carbon removal technologies and making our facilities as efficient as possible,” Palmieri added, as The Guardian reported.

The announcement is designed to bring Facebook in line with the Paris agreement, which aims to curb global warming to 1.5 degrees Celsius above pre-industrial levels, as The Irish Times reported.

And yet, despite its climate pledges, Facebook has not stopped the thousands of climate misinformation and denial sites on its platform, as The Irish Times noted.