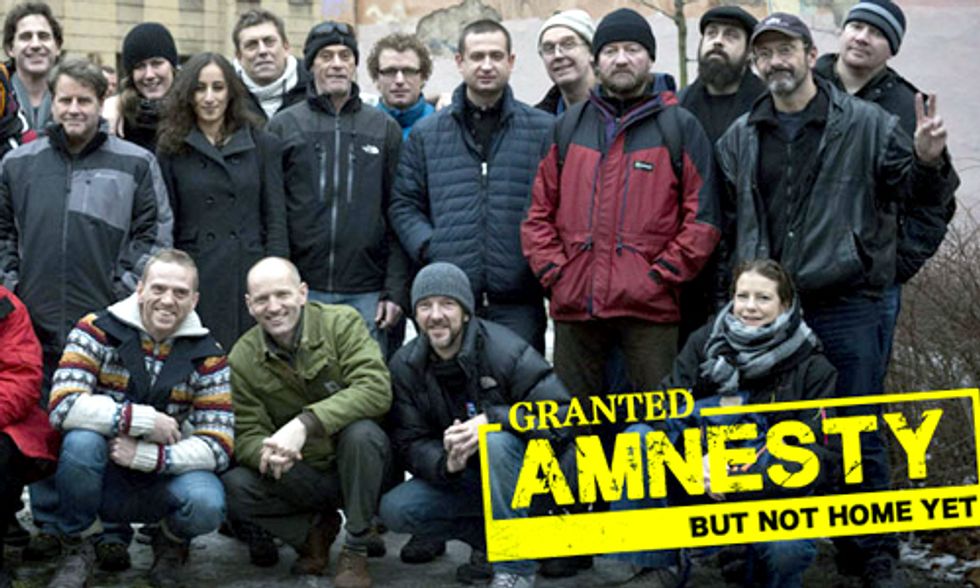 The final chapter in the legal ordeal of the Arctic 30 began today as the group was asked to attend a meeting at Russia’s powerful Investigative Committee, where the criminal case against them is being dropped en masse.

They will then have one more hurdle—securing exit visas in their passports—before the non-Russians are free to leave the country and be reunited with their families. A meeting with the Federal Migration Service is scheduled for later today. The Arctic 30 are expected to leave Russia in the coming days.

"This is the day we've been waiting for since our ship was boarded by armed commandos almost three months ago," Peter Willcox, American captain of the Greenpeace ship Arctic Sunrise, today said.

"I'm pleased and relieved the charges have been dropped, but we should not have been charged at all. We have already discovered enough oil to dangerously heat the planet and we took action to prevent that. Giving the planet to the oil and coal companies is not an option.

The Arctic 30 have lived together in a St Petersburg hotel since being release on bail nearly five weeks ago. They will spend today (Christmas Day in the west, but not in Russia) at the Investigative Committee and then the Federal Migration Service. They will then have Christmas dinner together – possibly the last time they will all be together after a saga that started with a peaceful protest at an Arctic oil rig before they were jailed for two months, sparking a huge global campaign."

"This is weird for me to receive this today on Christmas Day. I don't see it as a gift. We should not have to receive this ‘gift’ at all, we should be in our homes with our families today, it is ridiculous that we were arrested for a peaceful protest," Camila Speziale, 21, from Argentina said.

"It seems such a long time ago we were on the Arctic Sunrise. It is unbelievable that Gazprom has already started drilling in the Arctic. I'm happy to be going home, but this is not over yet. I will keep raising my voice and taking real action to stop the oil companies destroying the Arctic."

The Investigative Committee is today implementing an amnesty agreed by the Duma (Russian parliament) that effectively ended legal proceedings against the Arctic 30. Yesterday just one of the thirty—Anthony Perrett—had proceedings against him dropped. Today the other 29 are joining him."

“By taking the amnesty nobody is admitting guilt, far from it, these are people who remain proud of the stand they took for Arctic protection," Greenpeace International Arctic campaigner Ben Ayliffe said.

"And now this chapter is nearly over. Greenpeace would like to thank the consular officials in St Petersburg who worked hard to get us this far. Even today many of them are giving up their own Christmas Day to push the migration service to process visas as quickly as possible.”