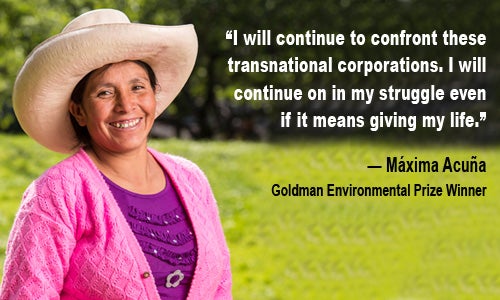 A petite woman from Peru has been honored with a huge award, the 2016 Goldman Environmental Prize, for years of principled resistance to the Colorado-based gold-seeking conglomerate Newmont Mining Company.

“During my struggle I felt very sad, like I was alone, but now I know I am not alone,” Máxima Acuña de Chaupe told a small group at a pre-ceremony reception Saturday night in San Francisco’s historic Mission District. Nearby her grandson Maximo squealed and chased a miniature soccer ball in happy ignorance of the seriousness of the subject. 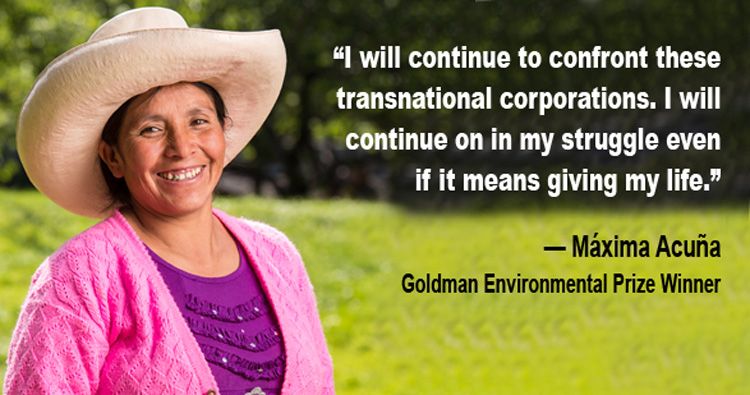 Clearly emotional and a bit overwhelmed by the attention of so many people in a bustling city thousands of miles from her highland home, upon which Newmont has staked a claim on a very large gold deposit, her tone hardened as she finished her thought: “People are becoming aware and understand what I’m fighting for: the land, water and life, not only my own, but the population in general.”

Celebrated globally for her courageous refusal to sell or cede the land her family uses to raise animals and vegetables to Newmont for its proposed Conga gold mine, Acuña de Chaupe and her family have survived lawsuits filed by the company and endured harassment and beatings at the hands of a security force alleged to be on the company payroll.

Adam Shapiro of Ireland-based human rights NGO Front Line Defenders has been following and documenting these events and said this week that when he was visiting the area recently, there was another incident. “The security company hired by the mine operator arranged for locals from nearby villages to come and tear up vegetables that had been planted by Máxima’s son. This was part of a pattern of such attacks against the family,” he said. “The security company maintains a presence allowing for 24 hour surveillance of the home and the farm and there are always guards watching as well as controlling traffic on the road.”

Under such circumstances, Máxima is not alone. In the short time that Shapiro was there, he reported that a land rights defender in a nearby town received death threats.

This pattern is playing out across South and Central America, where environmentalists and land rights defenders challenging mining companies and other megaprojects put themselves at risk. The example foremost in conversations at the Saturday reception was 2015 Goldman Prize winner Berta Cáceres, murdered last month apparently for opposing a dam project in Honduras.

Another NGO that has been tracking developments in Peru closely is Earthworks, whose Mining Program Director, Payal Sampat, stated that the award is further proof that this lamentable state of affairs is finally changing. “Mining companies cannot ride roughshod over community wishes—such bad behavior may have been standard operating practice 20 years ago, but is not something that communities will tolerate or that shareholders will turn a blind eye to,” she said. “Trampling community wishes comes with consequences to the bottom line.”

For evidence, Sampat pointed to the idling of the Conga proposal for years due to the resistance of Acuña de Chaupe and her community and the fact that Newmont appears to have now taken it off their list of current assets, as outlined in a press release her group just released: “The world’s second largest gold mining company, Denver-based Newmont’s 2016 10-K SEC filing declared: “Under the current social and political environment, the company does not anticipate being able to develop Conga for the foreseeable future.” Newmont will hold its annual shareholders’ meeting in Delaware on April 20.”

While a spokesman for the company, Omar Jabara, countered that that the Goldman Prize “does not have balanced or complete information about the land dispute,” despite Newmont losing in court three times, including the country’s Supreme Court according to Acuña de Chaupe’s lawyer, Mirtha Vasquez, he confirmed the company’s recent statement about the project’s idle status, which in light of this week’s news will probably be a topic of conversation when the company’s investors meet again soon.

For her part, Máxima says that she does not know what to expect when she returns to Peru, but that she remains steadfast in her stance and knows the world will be watching. So as the sun set over San Francisco this past weekend, she closed her statements by saying, “I will continue to confront these transnational corporations. I will continue on in my struggle even if it means giving my life.”