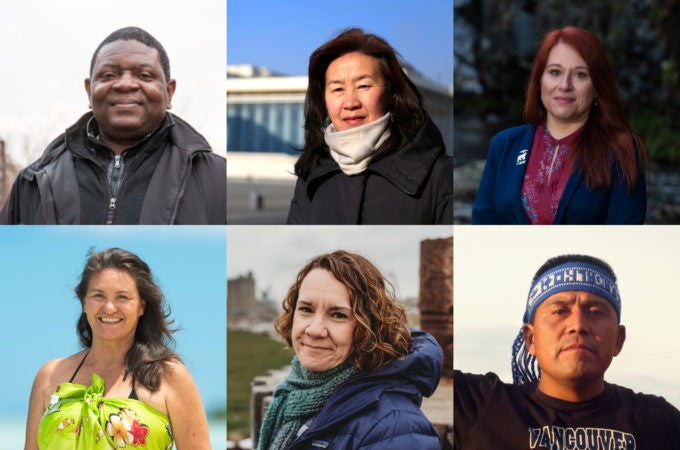 This year marks the 30th anniversary of the Prize founded in 1989 by U.S. philanthropists Rhoda and Richard Goldman. To date, 194 winners from 89 different nations have received this award.

This year’s winners include an environmental and human rights lawyer who stopped the destruction of Liberia’s tropical forests, a conservationist who helped create a large protected area in Mongolia and a biologist from North Macedonia who fought against hydropower plants planned inside a critical habitat of the rare Balkan lynx. The winners also include an indigenous leader from Chile who led a movement against two hydroelectric projects on a sacred river, a marine conservationist who campaigned to protect the Cook Islands’ marine biodiversity, and an activist from the U.S. who rallied residents to stop the construction of a massive oil export terminal that could have threatened the health and safety of the local community.

“I am so moved and inspired by these six environmental trailblazers,” Susie Gelman, president of the Goldman Environmental Foundation, said in a statement. “Each of them has selflessly stood up to stop injustice, become a leader when leadership was critical, and vanquished powerful adversaries who would desecrate our planet. These are six ordinary, yet extraordinary, human beings who remind us that we all have a role in protecting the Earth.”

The winners will be honored at the San Francisco Opera House in California, U.S., on April 29. Former U.S. vice president and environmental activist Al Gore will present the keynote address.

Here are the winners of the 2019 Goldman Environmental Prize:

Environmental lawyer Alfred Brownell stopped the clear-cutting of Liberia’s tropical forests by palm oil plantation developers in one of the world’s most important biodiversity hotspots. For his safety, he lives in exile in the US. https://t.co/gqcr8ba2oj #GoldmanPrize30 pic.twitter.com/8uWaUv6Sas

Alfred Brownell, an environmental lawyer, has been a champion of Liberia’s tropical forests, protecting them from being cleared for palm oil plantations.

In 2010, the Liberian government granted a 65-year lease of about 2,200 square kilometers (850 square miles) to Golden Veroleum Liberia (GVL), a Southeast Asia-based agro-industrial company, to establish palm oil plantations in the country. But there were reports that the company was allegedly clearing community forests without consent or compensation, and damaging sacred sites and farms and polluting water sources.

Brownell worked with the local communities to file a complaint against GVL with the global certification body for palm oil, the Roundtable on Sustainable Palm Oil (RSPO). The complaint worked: RSPO stopped GVL from expanding its plantations, halting the clearing of 94 percent of the forest leased to GVL.

The company went on to sign more agreements to develop plantations, but reportedly failed to deliver on the jobs and other benefits it had promised, resulting in violent clashes and arrests of community members. Brownell collated more legal evidence to demonstrate GVL’s malpractices, and in 2018 the RSPO dismissed GVL’s appeal against the initial stay on its palm oil expansion.

Currently a research associate professor in the School of Law at Northeastern University in Boston, Brownell was forced to flee to the U.S. with his family because of death threats. But he hopes to return to his country soon.

BREAKING NEWS: We are proud to announce that our #Mongolia Program Director, Bayarjargal (Bayara) Agvaantseren has been awarded the prestigious @goldmanprize for her role in protecting the snow leopard habitat of Tost from mining. Read more: https://t.co/mTIxwyvcS8 #goldman #hero pic.twitter.com/B4o95j8eDI

The South Gobi Desert in Mongolia is a major mining hub, with deposits of coal, uranium, copper, gold, oil and gas. It is also a critical habitat of the threatened snow leopard (Panthera uncia), a species that’s declining in number due to habitat loss, poaching and retaliatory killing for livestock predation.

Bayarjargal Agvaantseren, currently the Mongolia director for the conservation NGO Snow Leopard Trust, became interested in snow leopards while translating for a scientist visiting the area. She went on to work on various conservation projects involving Mongolia’s herder communities. In 2009, after learning about the widespread mining operations in the Tost Mountains in the South Gobi Desert, a key migration habitat for the snow leopard, she began working with the local Tost community to create the massive Tost Tosonbumba Nature Reserve.

Only about 30 critically endangered Balkan lynxes (Lynx lynx balcanicus) are believed to live in North Macedonia today. And they’re almost all found in Mavrovo National Park bordering Albania and Kosovo. In 2010, two large hydropower plants were proposed in Mavroro, their funding secured through the European Bank for Reconstruction and Development (EBRD) and the World Bank.

Ana Colovic Lesoska, the director and founder of the Eko-Svest Center for Environmental Research and Information, brought together North Macedonian NGOs and environmental law activists in a “Save Mavroro” campaign. Colovic Lesoska went door-to-door to inform locals about the impacts of the projects, organized public protests, launched a petition asking the government, EBRD and World Bank to stop the projects, and even filed a complaint with the EBRD alleging that it had approved funding for the hydropower projects without adequately assessing the impacts on the biodiversity of the area.

The World Bank ultimately withdrew its funding, a North Macedonian court scrapped the given environmental permit, and the EBRD canceled its loan.

Over the course of five years, marine conservationist Jacqueline Evans rallied public support to achieve an unexpected feat. She helped create the multi-use Marae Moana marine park, a protected area that covers all of the Cook Islands’ exclusive economic zone, spanning 1.9 million square kilometers (763,000 square miles) of the country’s ocean territory. The park also includes a 50-nautical-mile (93-kilometer) zone around each of the 15 islands where commercial fishing and sea-bed mining isn’t permitted, leaving the areas to be used by island communities.

To make the marine park a reality, Evans traveled across the islands with a team of government, NGO and traditional leaders, meeting with communities, listening to their priorities and building trust. She also partnered with a local rugby star Kevin Iro to create the Marae Moana Establishment Trust, and worked with global experts to design and draft the legislation around the marine park. As the director of the Marae Moana Coordination Office, Evans is now working to create a national Marae Moana spatial plan to ensure that all of the Cooks’ ocean territory is managed sustainably.

Alberto Curamil organized his indigenous community to stop the construction of two hydroelectric projects on the Cautín River in Chile. In 2018, he was arrested and jailed—because of his activism, sources believe—and remains in jail today. https://t.co/vqWWbYVOcS #GoldmanPrize30 pic.twitter.com/7jiXSfcvbP

Alberto Curamil, an indigenous leader of the Mapuche people in Chile’s Araucanía region, has been leading the fight against hydropower projects that he says will destroy Araucanía’s forests and rivers. To mount resistance against the projects, Curamil rallied not only the Mapuche people but also non-Mapuche members, including environmental organizations and academics.

He organized protests, road blockades and even launched a legal campaign alleging that the Chilean government had permitted the hydropower projects without the free, prior and informed consent of the local communities. In 2016, Chile canceled two of the planned hydropower projects, citing public opposition for one and lack of consent and adequate assessment of environmental impacts for the other.

In 2018, Curamil was arrested for allegedly being involved in a robbery, a charge that his community says is a result of his activism against the hydropower projects. Curamil is still in jail.

When Linda Garcia and the Fruit Valley Neighborhood Association launched a campaign to block an oil terminal at the Port of Vancouver, WA, it seemed like something of a long shot. Today, Garcia is one of this year’s @GoldmanPrize winners. https://t.co/2qReiZrDdc

A resident of Fruit Valley, a small neighborhood in Vancouver, Washington, Garcia first heard of the Tesoro Savage oil terminal project in 2013. This project, which was scheduled to be set up close to her neighborhood, planned to transport 11 million gallons (42 million liters) of oil per day, creating what would be North America’s largest oil terminal. With Fruit Valley already suffering from bad air quality, Garcia was concerned that the oil project would further threaten the safety and well-being of her community.

She dug deep into the company’s past records, campaigned and raised public support to oppose the project, and became a spokesperson. She also testified as a community witness at public hearings and city council meetings despite multiple death threats and suffering from an illness that required chemotherapy. The efforts of Garcia and other campaigners bore fruit in 2018, when permits for the Tesoro Savage project were denied and the company’s lease was terminated.