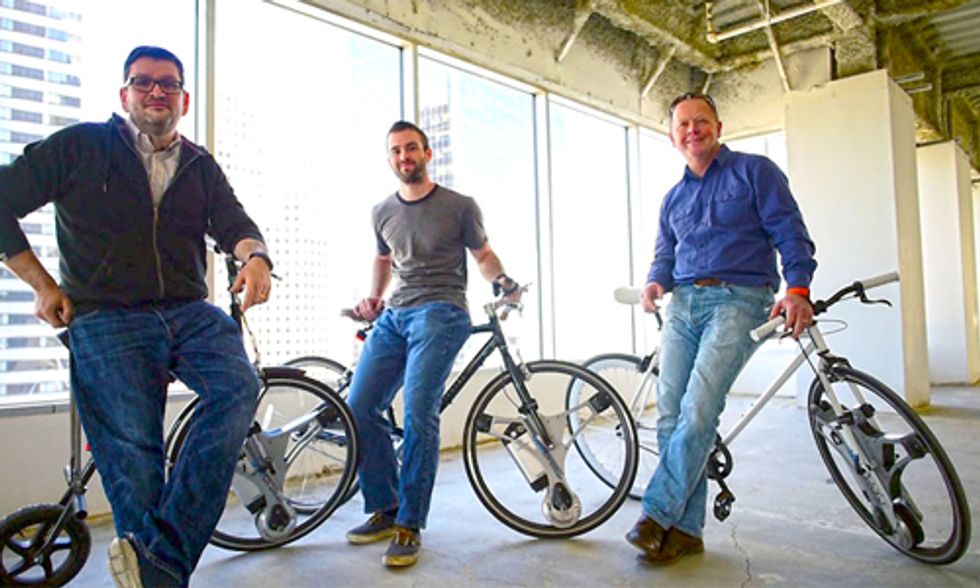 Electric bikes are a great way to get around with less pedal power and research shows that they make people cycle longer and more frequently. Still, e-bikes are a niche market, and many people don't want to buy a new ride when their standard pedal-bike works perfectly fine.

But now, thanks to a team of Cambridge, Massachusetts inventors, you can simply upgrade old faithful with the GeoOrbital wheel that turns your existing bicycle into an e-bike in less than 60 seconds and without any tools. A thumb-activated throttle is then clipped onto the bike's handlebars.

The Verge described how it works:

Instead of spokes, the wheel contains a sort of triangular housing with three smaller wheels that rest against the inside of the rim. Like a set of gears, those smaller wheels grab the rim and turn the bike wheel, propelling you forward by using the 500W motor and 36V battery found inside the housing.

The inventors, who used to work at Ford, SpaceX and helped build micro-businesses with the Peace Corps, say that their orbital, or spoke-less, wheel was inspired by the sci-fi flick TRON:

An Orbital wheel is a wheel with no center–it “orbits” around an empty area, rather than spinning as a result of being connected to a “hub.” For example have you seen the movie TRON? The wheels on those motorcycles are examples of Orbital Wheels (or Hubless wheels and Centerless wheels). The GeoOrbital wheel is an evolution of the Orbital wheel platform, where instead of orbiting around an empty space, the center of the wheel contains components that make the wheel function as an “all-in-one” vehicle propulsion system. We call this central mass a “Geo.”

Instead of the standard inflatable tube and tire, the GeoOrbital wheel has a solid foam tire, which acts the same as a regular tire and also means "you never have to worry about getting a flat or even checking tire pressure," the developers say.

Impressively, after many earlier prototypes and customer feedback, the latest version of the GeoOrbital wheel comes with a built-in USB port so you can charge your devices such as a smartphone or a speaker perhaps. It also has a removable and lockable lithium-ion battery that acts as a portable power bank.

All told, after installing the 20-pound wheel, a rider can achieve speeds of up to 20 miles per hour on flat surfaces with a 50 mile range.

"The more you choose to pedal the more range you can expect, and you can always take a spare battery with you for longer rides," the designers note.

In case you're wondering how it rides, Skip Ferderber at GeekWire gave the e-bike a test spin:

So how does it feel when riding it? I tested the bike wheel on the grounds of the Seattle Center. Because its power source is on the front, the bike initially felt slightly heavier and less flexible than a standard bike. Once I thumb-activated the throttle the bike felt both easy to navigate and powerful. It took less than two minutes to become accustomed to the bike powering me instead of me pedaling. In my final (but short test), I drove it up the short hill to the west of Key Arena and was pleasantly surprised at how easily it powered me up hill. I am not precisely a featherweight.

The patent pending product has easily zipped past its $75,000 Kickstarter goal with nearly 500 backers putting in more than $350,000. The market price will be roughly $900, which is less than many other e-bikes out there.

The Verge noted that there are similar products on the market such as Evelo's Omni wheel and the Superpedestrian that is currently taking preorders.