Go Dirty for the Drought 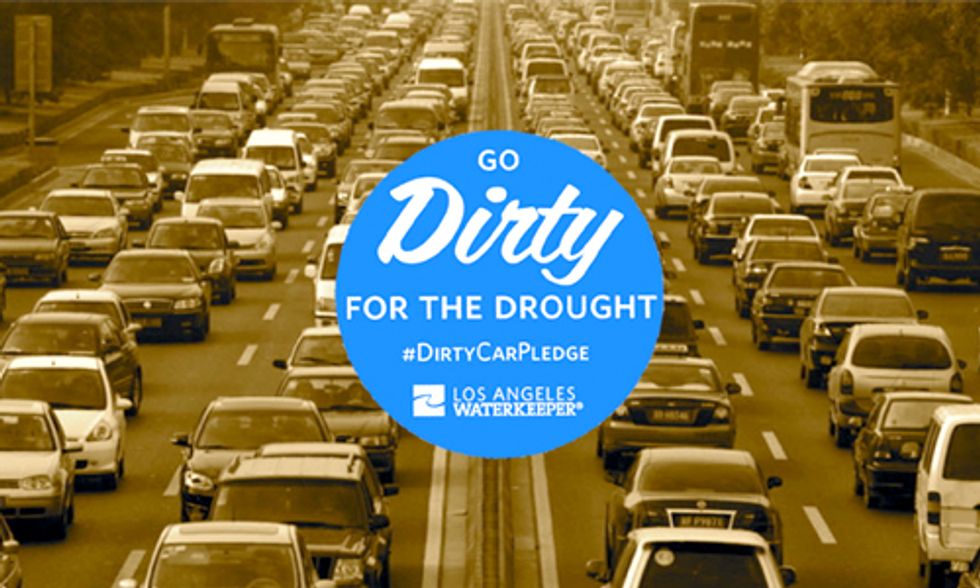 It’s been nine months since Gov. Brown announced a state of emergency as California is experiencing its worst drought in recorded history. We haven’t had nearly enough rain to make an impact, and Angelinos are still using an average of 122- 129 gallons of water a day.

The costs of the drought are visible as nearly 100 percent of California continues to suffer severe drought conditions: Bone-dry lakes, wildfires burning thousands of acres and an expected 2.2 billion dollar loss from agriculture by the end of 2014. It’s time we take the drought seriously, and do our part to conserve water before it’s too late.

Los Angeles has a population of close to 4 million people. With hundreds of thousands of cars sitting in traffic on a daily basis, and streets lined with a Benz per block. LA is known for its car-obsessed culture. In this city, many say you are what you drive.

So, go dirty. Los Angeles Waterkeeper’s campaign “Go Dirty for the Drought” asks Angelinos to pledge to not wash their car for 60 days. While saving a few million gallons of water is no small feat, the bigger impact is getting people to think about the drought and prioritize water conservation in our everyday lives. When you take the Dirty Car Pledge, you’ll get a static-cling sticker to put on the inside of your car window, which serves as proof of a good excuse for a dirty car, and also helps spread the word about water conservation while you’re driving throughout the city and sharing it on social media. If you really are what you drive, then going dirty for the drought makes you an informed, empowered citizen doing your part to conserve water.

And it doesn’t have to stop there. Take shorter showers, remove your grass lawn and replace it with water-efficient plants, and urge state and local agencies to prioritize water conservation, reuse and recycling before options like water imports and desalination. Also be aware of your city’s water conservation ordinances. The City of LA limits outside watering to specific days of the week, and restaurants are no longer allowed to serve water unless requested by a customer.

The State Water Resources Control Board has authorized municipalities to fine residents and businesses for water wasting activities like home car washing without a shut-off valve and washing down sidewalks and driveways. Though enforcement of these regulations is lacking, it is important that we adhere to them and take simple steps like going dirty for the drought to raise awareness about water conservation.