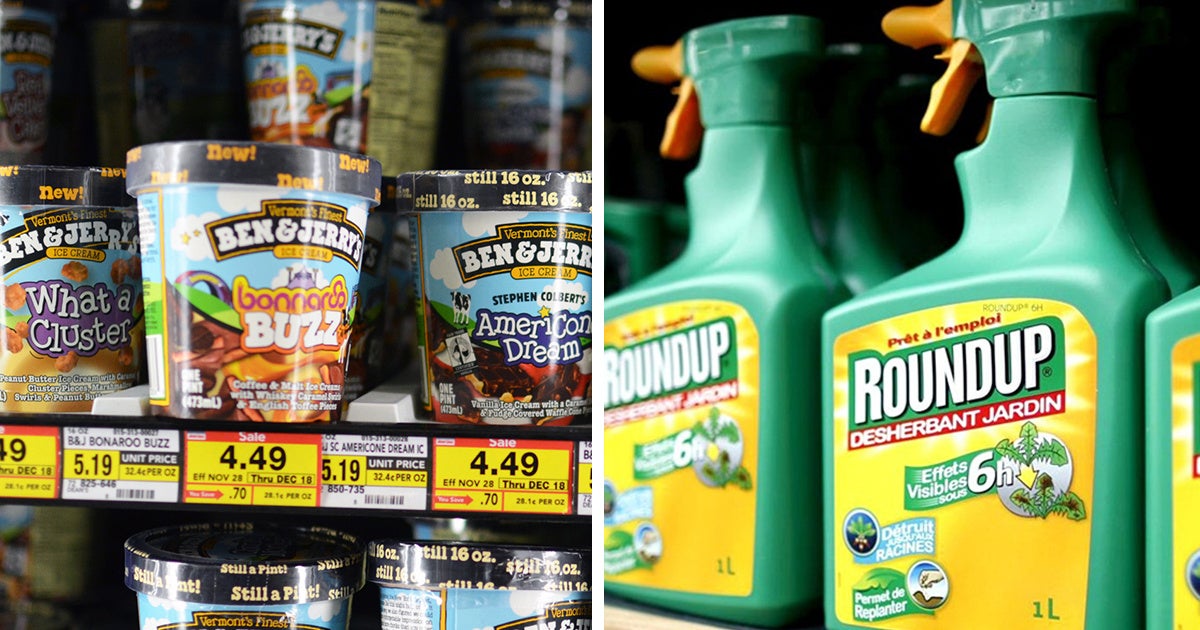 Sometimes the stars align. This is one of those times.

Not long after the Organic Consumers Association (OCA) announced that Ben & Jerry’s ice cream tested positive for glyphosate, the key ingredient in Monsanto’s Roundup weedkiller, another story broke—one that validates the importance of finding glyphosate, even at low doses, in any food.

According to internal Monsanto documents, Monsanto forced the retraction of a critical long-term study, first published in 2012, showing that very low doses of Monsanto’s Roundup herbicide—lower than those detected in Ben & Jerry’s ice cream—caused serious liver and kidney damage in rats.

Shortly before the study was retracted, the editor of the journal began working for Monsanto, under a consulting contract. (The study, led by G.E. Séralini, was republished in 2014, by the Environmental Sciences Europe).

Since the New York Times first reported on OCA’s testing findings, the news about Ben & Jerry’s has been picked by thousands of media outlets, including TV stations, in the U.S. and internationally, including in Germany, the U.K., France, Mexico, Portugal and Japan.

No surprise, it didn’t take long for critics to come out of the woodwork—mostly the usual suspects who defend Monsanto. Their criticisms focused largely on the amounts of glyphosate detected in the ice cream, and how they fall below the U.S. Food & Drug Administration’s (FDA) “allowable safe levels”—levels that don’t take into account the latest research.

That latest research, in addition to the Séralini study, includes a peer-reviewed study published in January, in Scientific Reports. Led by Dr. Michael Antoniou at King’s College London, the Antoniou study found that low doses (thousands of times below those declared “safe” by U.S. and international regulators) of Roundup weedkiller, administered to rats over a two-year period, caused non-alcoholic fatty liver disease. Non-alcoholic fatty liver disease, which is now reaching epidemic proportions, can lead to cirrhosis of the liver, a life-threatening condition.

OCA’s news, and the latest revelations about Monsanto’s efforts to bury the truth about Roundup’s true toxicity have Ben & Jerry’s (and parent company Unilever) sweating. As for Monsanto, company officials weren’t too pleased when their internal emails went public. The New York Times reported that one Monsanto scientist wrote this in an internal email in 2001:

“If somebody came to me and said they wanted to test Roundup I know how I would react—with serious concern.”

The email was uncovered in what EcoWatch reported are more than 75 documents, including intriguing text messages and discussions about payments to scientists, which were posted for public viewing early Tuesday by attorneys suing Monsanto on behalf of people alleging Roundup caused them or their family members to become ill with non-Hodgkin lymphoma, a type of blood cancer.

Monsanto told the New York Times “It was outraged by the documents’ release.”

But we are the ones who should be outraged. By Monsanto knowingly selling a toxic product, and covering up that fact by attacking credible independent scientists. By government agencies that allowed, and possibly even colluded in the cover-ups and attacks. And by companies like Ben & Jerry’s that profess great concern for the environment, the climate and “social responsibility,” while excusing themselves from having to live up to those promises.

In response to our finding glyphosate in Ben & Jerry’s ice cream, the company told the New York Times it “was working to ensure that all the ingredients in its supply chain come from sources that do not include genetically modified organisms, known as G.M.O.s.”

“We’re working to transition away from G.M.O., as far away as we can get. But then these tests come along, and we need to better understand where the glyphosate they’re finding is coming from. Maybe it’s from something that’s not even in our supply chain, and so we’re missing it.”

Not even in their supply chain? Seriously? Ben & Jerry’s is one of the, if not the biggest buyer of non-organic milk in Vermont. And the cows that make that milk? They’re fed GMO animal feed.

More than 92,000 acres of Vermont farmland is planted in corn grown for animal feed, reported Regeneration Vermont. Ninety-six percent of that corn is GMO—corn grown using massive amounts of chemical fertilizers, and toxic weedkillers like glyphosate, atrazine and metolachlor.

But that’s not something Ben & Jerry’s, the darling brand of the progressive movement, likes to talk about—even though activists have been begging the company for more than two decades to clean up its act, and go organic. And not just because of the glyphosate in its ice cream, though that’s reason enough—but because, as OCA Director Ronnie Cummins recently explained, because Ben & Jerry’s support of conventional and GMO dairy is ruining Vermont’s waterways, hurtling dairy farmers into bankruptcy, hurting migrant workers and perpetuating animal abuse.

We Stand by Our Test Results

Criticisms of the New York Times story on OCA’s test results, and on the testing itself, don’t hold up. Our tests were conducted by Health Research Institute Laboratories, an independent, 501(c)(3) non-profit analytical chemistry laboratory, using the latest methodology. We provide a full explanation of that methodology here.

As for the significance of the amounts of weedkiller detected in Ben & Jerry’s ice cream, as mentioned at the beginning of this post, we point to the latest research that says these amounts are actually higher than doses known to cause serious health issues in rats, based on long-term peer-reviewed studies. You can read more about the relevance of our findings here.

Ben & Jerry’s has been hiding behind its do-gooder image for far too long. We intend to keep the pressure on, until the company commits to a three-year transition to 100 percent organic, immediately.