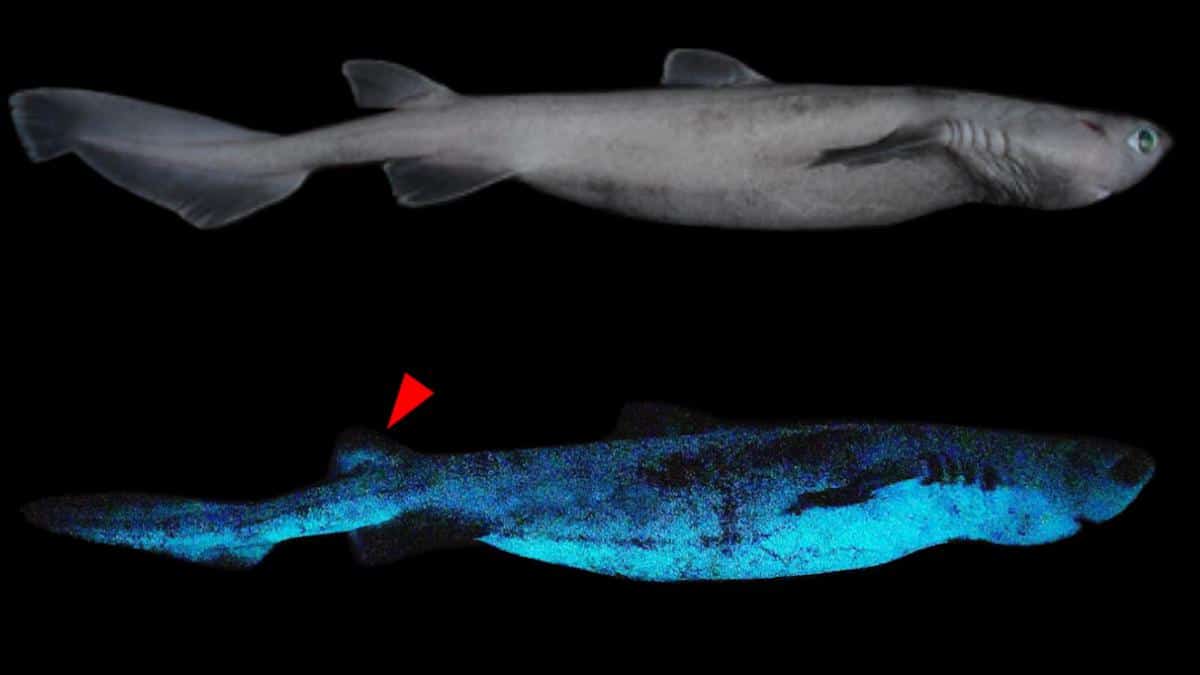 Scientists believe sharks use bioluminescence to camouflage themselves. Jérôme Mallefet

The sharks were found in the waters of Chatham Rise, off of New Zealand. And one of them, the kitefin shark (Dalatias licha), is now the largest known vertebrate capable of producing its own light, CNN reported.

“This first experimental study of three luminous shark species from New Zealand provides an insight into the diversity of shark bioluminescence and highlights the need for more research to help understand these unusual deep-sea inhabitants: the glowing sharks,” the study authors wrote.

Bioluminescence is defined as the production of light by living organisms and it is caused by a biochemical reaction. It is common among marine life, and was first observed in sharks in the nineteenth century. Today, around 57 out of 540 known shark species are thought to be capable of producing bioluminescence, study co-author Jérôme Mallefet, head of the marine biology laboratory at the Catholic University of Louvain in Belgium, told CNN.

However, the study marks the first time this property has been observed in a shark as large as the kitefin, which can grow to be nearly six feet. Researchers had previously thought that kitefins might be bioluminescent, because specimens showed that they were capable of producing light. But they have never before been observed doing so because they live so far below the ocean’s surface, at 656 to 2,953 feet deep.

“The two other Etmopterus sharks were also not documented, so it is the first time,” Mallefet told The Guardian.

The three sharks were collected in January 2020 from a part of the ocean known as the mesopelagic or “twilight” zone, which is between 200 and 1,000 meters (approximately 656 to 3,281 feet) deep. Here, around 90 percent of life is thought to have some form of bioluminescence that it uses for attracting mates, catching prey or camouflage, among other things, according to Science Alert.

In the case of the sharks, scientists think that they use it to camouflage themselves from below. The bioluminescence is concentrated in their bellies and underbellies, and the glow could help them blend in with the light that is visible from the sky. This could protect the smaller two species from predators and help the kitefin shark both illuminate and sneak up on prey, according to The Guardian.

However, there is one mystery about the kitefin shark that does not fit this hypothesis: Its dorsal fin also lights up.

“The luminous pattern of the Kitefin shark was unknown and we are still very surprised by the glow on the dorsal fin,” Mallefet told The Guardian. “Why? For which purpose?

More research will be needed to understand how and why these species use their self-made light. But the study shines its own light on the unique ecosystems of the deep sea, and the need to both understand and preserve them.

“I fear that we have done a lot of mistakes throwing stuff in the sea,” Mallefet told CNN. “I fear what will happen for the next generations.”