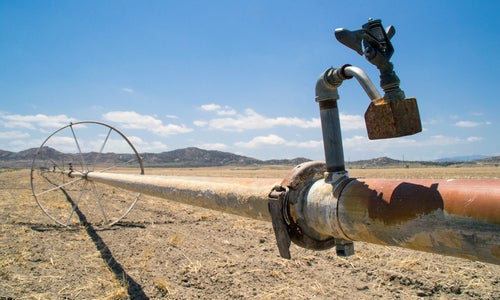 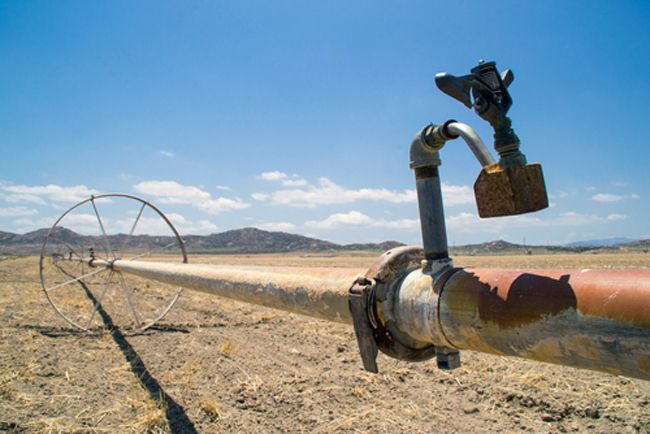 The water irrigation pipes in the dry Southern California farmland.

Gloomy, for sure. But it doesn’t have to mean doom. Befitting its rich historic tradition, California controls its own destiny when it comes to preserving precious water resources and curbing carbon pollution—all while maintaining a healthy economy. But bold actions are needed now. “We have a choice between protecting our economy by protecting our environment—or allowing environmental havoc to create economic havoc,” says former U.S. Treasurer Secretary Robert Rubin said, a Risky Business Project co-chair in announcing last week’s “Climate Risk in the Golden State” report.

California has already shown it is up to the challenge. Its leadership in enacting strong climate policies—the state’s AB32 law being the centerpiece—and catalyzing clean energy growth is unsurpassed in the country. Clean energy jobs, rooftop solar installations, electric car sales, overall renewable energy sourcing —on all of these fronts, California, the world’s seventh biggest economy, is leading.

And the business community has openly embraced the state’s leadership, too—Apple’s $850 million project to buy 130 megawatts of home-grown solar power from First Solar, being just one of the latest examples.

The state’s water scarcity challenges are manageable, too. But again bold leadership is needed. The Governor’s new water restrictions and last year’s passage of a $7.5 billion water bond and groundwater law are critical and begin to put California on an improved path. Yet, more still needs to be done.

For example, the groundwater law needs faster implementation. With groundwater levels dropping fast, it is becoming clear that California cannot wait until 2020 to have local communities adopt groundwater management plans, as the current law calls for.

Better water-use disclosure—especially when it comes to agriculture water use –is another must, as Senator Fran Pavley is proposing in a bill this year. “Groundwater levels are dropping precipitously, especially in San Joaquin Valley,” said Heather Cooley, director of the Pacific Institute’s water program. “Yet we don’t have good data on how much groundwater is being pumped.”

Some businesses are already embracing such steps. Driscoll’s, a major berry grower based on California’s Central Coast, requires its growers in Pajaro Valley to collect and track water use data using remote sensing from groundwater pumps.

Driscoll’s is also spearheading a bold public/private partnership, the Community Water Dialogue, to develop local, watershed-based solutions to the valley’s water challenges. It’s the kind of project many experts agree are greatly needed all across the state.

“The state of California has to deal with groundwater, or we’re going to ruin this state,” said Driscoll’s CEO Miles Reiter, during a recent grower’s tour in Pajaro Valley, which gets virtually all of its water from groundwater.

Driscoll’s also joined forces last month with a half-dozen California businesses on the “Connect the Drops” business initiative, which calls for “fresh thinking, shared purpose and bold solutions” from California’s government and private sector in facing the state’s unprecedented water challenges. The Ceres-organized effort also includes diverse companies such as Coca Cola, KB Home, General Mills, Levi Strauss & Co., Gap and Symantec. These companies have come together to help bridge ongoing divisions in the state that have for years blocked progress for sustainable water policies.

Reiter, for one, says he welcomes all the attention the drought is getting.

“Everybody is worried about this, whether they admit it or not,” he said last month. “And it’s really sort of liberating to just quit arguing about if there’s a problem and (start tackling it).”