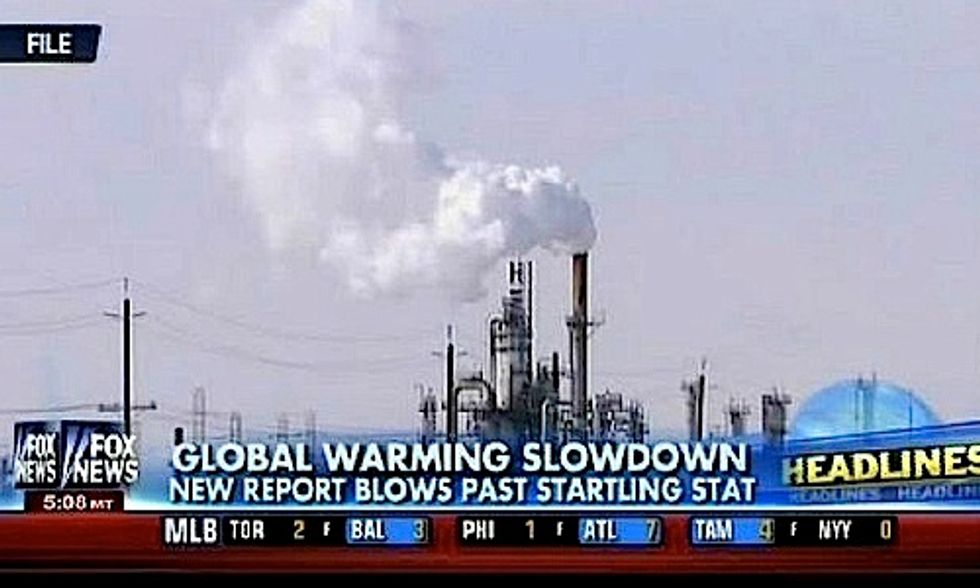 What appears to be a slowdown in the rate of atmospheric warming this century may have a simple explanation, Mexican scientists say. It could be the consequence of protecting the ozone layer.

Scientists who looked at the whole history of climate in the twentieth century have come up with a new possible explanation for the apparent slowdown in global warming. It is because, they say, of the Montreal Protocol that banned chlorofluorocarbons (CFCs) and saved the ozone layer.

The slowdown in the rate of atmospheric warming this century may be due to the Montreal Protocal in 1987, which phased out Ozone-depleting CFCs internationally. The slowdown is a favored case of climate change deniers.

The ozone layer was the second great atmospheric crisis of the late twentieth century (the first involved the urban smog and acid rain that triggered clean air legislation in Europe and the U.S.). CFCs were the safe, enduring gases used as refrigerants: their only problem was that—once they reached the stratosphere—they unexpectedly began to destroy the ozone layer that screens out harmful ultraviolet light.

Within four years of the dramatic discovery of a huge “hole” in the ozone layer over the Antarctic, these gases were phased out, in a rare act of international agreement, by the 1989 Montreal Protocol.

But CFCs had a second unexpected property. They were greenhouse gases of unusual potency: molecule for molecule, one of them was rated at more than 17,000 times more effective at trapping infrared radiation than carbon dioxide. CFCs were released only in comparatively tiny quantities, but they were calculated to account for up to 24 percent of global warming.

Francisco Estrada of the National Autonomous University of Mexico and colleagues report in Nature Geoscience that they spotted the signal of the missing CFCs when they used statistical analysis to examine average temperature records in the two hemispheres from 1880 to 2010.

Exercises such as these are not simple: the scientists had to find a way of eliminating natural cycles that keep the weather in a permanent pattern of change, and identify long-term trends that could be identified as evidence of human activity.

In the first place, for a mix of reasons, rates of change in the two hemispheres are out of step; in the second place there are natural cycles linked to ocean and atmospheric circulation such as the Atlantic Multidecadal Oscillation that are associated with extended periods of warming and cooling; in the third place things like greenhouse gas emissions are tied into cycles of economic growth, and affected again in many cases by legislation, perhaps to reduce the aerosols that make citizens cough and splutter, but that also block sunlight and have a mild cooling effect.

And to get the results that they did, the researchers had to use advanced statistical methods (for example, they say, the “Perron-Yabu testing procedure, valid with integrated or stationary noise”) that would baffle most of the human race.

So like all research results, the findings are tentative and published to provoke more research. But even so, the graphs in Nature Geoscience show a pattern of human influence in global average temperatures.

In the last century, the planet warmed overall by 0.8 degrees Celsius. In the trend discernible in the sometimes dramatic oscillations of temperature, there is evidence of a slowdown in this warming during two world wars, and the Great Depression of the 1930s, when world trade came to a standstill, factories closed everywhere and chimneys stopped smoking.

The authors see a pronounced rise in both greenhouse gas emissions and in global temperatures in the 1960s—the start of sustained global warming. But they also see a distinct slowdown that begins in the 1990s in response to the Montreal Protocol, which began the phase-out of the CFCs and the slow restoration of the ozone screen.

There is evidence that the ocean is warming 15 times faster than at any time in the last 10,000 years, which suggests that ocean circulation may be carrying away the heat that meteorologists expected to record in the atmosphere.

The Montreal Protocol is not the only possible explanation for the apparent slowdown. There is also evidence that at least one sector of deep ocean is warming 15 times faster than at any time in the last 10,000 years, which suggests that ocean circulation may be carrying away the heat that meteorologists expected to record in the atmosphere.

Two scientists in October proposed that the slowdown in the rate of global warming could possibly be explained by a much longer-term natural cycle that nobody had yet identified: a climate signal could propagate across the northern hemisphere in a self-organising way, just as the so-called “stadium wave” propagates around a sports arena as excited spectators stand and sit down again.

They say in Climate Dynamics that such a phenomenon could be linked to a brake-and-accelerator pattern of influence of northern sea ice on atmosphere and ocean circulation.

If this pattern exists, it would explain why climate modellers had not predicted the present lull or slowdown in global warming. But the wave itself would have nothing to do with global warming, the two authors say. It would just offer a new perspective for climate science.

The Nature Geoscience paper, however, does once again confirm the link between average temperatures and greenhouse gas emissions. “Paradoxically the recent decrease in warming, presented by global warming skeptics as proof that humankind cannot affect the climate system, is shown to have a direct human origin,” the authors conclude.