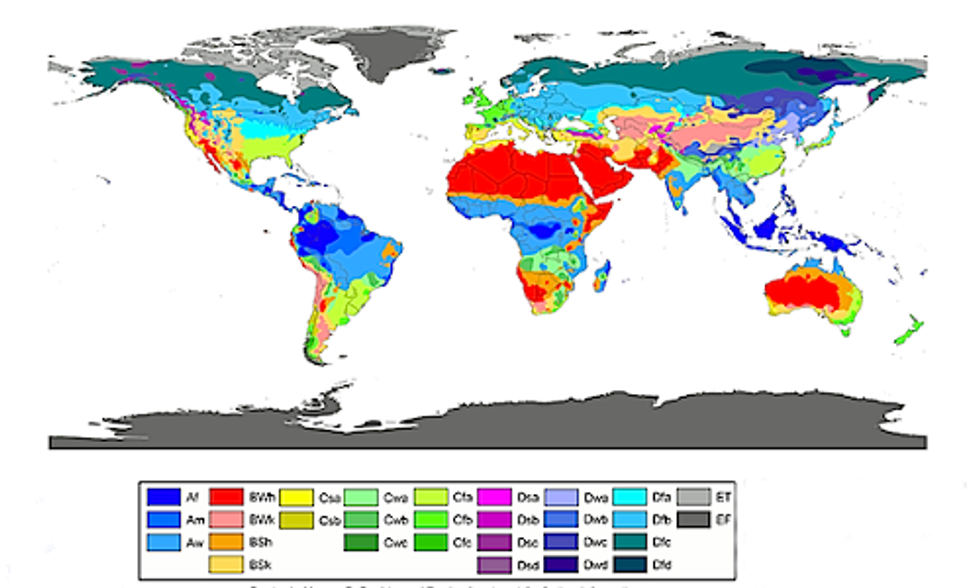 By 2100, vegetation patterns will be shifting in almost half the land area of the planet, according to new research in the journal Global and Planetary Change.

Song Feng of the University of Arkansas in the U.S. and colleagues in Nebraska, China and South Korea have taken a long cool look at what the projected patterns of warming are likely to do to the planet’s mosaic of climate types. And they predict dramatic changes.

Climate type is a century-old idea useful for making sense of geographical zones: regions are grouped according to the type of vegetation they support. Since a global map of native vegetation types can also deliver useful information about altitude, rainfall, soil type, prevailing weather and latitude, geographers regard the Köppen-Geiger classification —and an updated version known as Köppen-Trewartha—as a helpful way of describing the world.

Feng and his colleagues decided to see what projected changes in temperature would do to climate types. He wasn’t the first to do so; scientists from the U.S. National Oceanic and Atmospheric Administration reported in 2013 in Nature Climate Change on the probable speed of change in such zones.

But science advances by challenge and replication, and the Arkansas team began looking for themselves at the details of simulated change under the notorious “business as usual scenario”—the one in which global fossil fuel use continues to increase and higher levels of carbon dioxide and other greenhouse gases concentrate in the atmosphere.

The Feng scenario projected an increase of between three degrees Celsius and 10 degrees Celsius; the team analyzed observations made between 1900 and 2010, and then ran computer simulations from 1900 to 2100.

The Arctic will shrink. Sub-polar vegetation is expected to advance by five degrees of latitude and the temperate zones will push northwards too. Arid and semi-arid climate zones are expected to expand by somewhere between 3.3 and 6.6 million square kilometers in the last three decades of this century.

What this does to native vegetation types is hard to predict in detail but some projections have been made. In the Qinling mountain region of China, for instance, somewhere between 80 percent and 100 percent of the bamboo forests on which the giant pandas depend could disappear, because the rising temperature would be “no longer feasible for bamboo growth.”

In the south-western U.S. higher temperatures and drier conditions could lead to more forest fires, and pest outbreaks could lead to changes in forest structure and composition.

As the plants change, the animal species that evolved with the vegetation types could be increasingly at risk. Altogether, up to 46.3 percent of the planet’s land area could shift to warmer or drier climate types.

“Climates are associated with certain types of vegetation," Feng explained. “If the surface continues to get warmer, certain native species may no longer grow well in their climate, especially in higher latitudes."

"They will give their territory to other species," he concluded. "That is the most likely scenario.”