Global Warming in Pictures: ‘The Cartoon Introduction to Climate Change’ 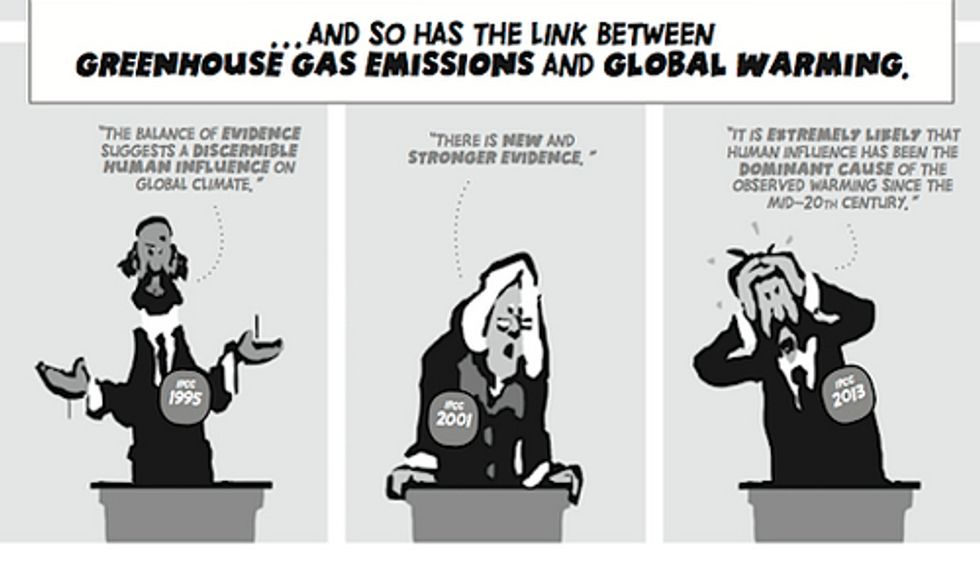 I just read The Cartoon Introduction to Climate Change, which I’m about to highly recommend to you and anyone you have ever known. I’ll even tease you with pretty previews of the book’s pages, below. But first, let me start with an admission: Environmentalists have a reputation for lacking in the humor department.

This stereotype is unfortunate. My colleagues here at Greenpeace and most of my own crunchy friends are genuinely witty people with good senses of humor. Good enough to make me laugh soy-milk out of my nose once I’m alerted to the kale that was stuck in my teeth all day. And websites like Grist have done a great job bringing some LOL’s to the WTF’s inherent in environmental reporting.

But our subject matter can be overwhelming in scope: global climate disruption, deforestation, human rights violations abound, freshwater depletion, ocean acidification... sorry, I just stopped listening to myself to avoid the temptation to hide in bed forever.

Much like environmentalists, today’s economists don’t typically earn a popular reputation for being especially funny. But Dr. Yoram Bauman, the “Stand Up Economist,” has a flair for humor in face of serious problems that he’s solving with well-established economic tools and analyses. Through the quirky cartoon illustrations of Grady Klein, Dr. Bauman has cranked out a series of light-hearted guides to microeconomics, macroeconomics and now… The Cartoon Introduction to Climate Change.

This graphic book takes readers on a eyeball-friendly journey through our Earth’s history, the tumultuous evolution of its climate system, explanations of key science supporting our understanding of climate change, and specific economic solutions that Dr. Bauman say we’ll need to employ to insure ourselves from potentially catastrophic global warming. You’ll also learn why our climate is like a compost pile, the types of one-liner jokes told by single-cell organisms and why human’s aren’t so great at cleaning up dog poop in public spaces (hint: Garrett Hardin).

Not only is it entertaining, it’s packed full of facts, presented as cartoons and peppered with a few transparently-unrealistic zingers. You can read it in an afternoon, and so could your kid, or your grandparent. And thanks to the illustrations and simple analogies, I’d bet they will retain more of the information.

Here’s a rundown of why I liked the book, with a few minor critiques at the end.

Core to this book’s utility is its accurate portrayal of science. Dr. Bauman’s work cites the most contemporary data from scientific authorities like the Intergovernmental Panel on Climate Change and the National Climate Data Center. When graphs and exact scientific models are used, Bauman and Klein attribute the work right there on the page, so you can check the source yourself. This is the coolest climate context since SkepticalScience.com. #GeekingRightNow.

Grady Klein’s simple illustrations help cut through wonky concepts from a wide rage of scientific and professional fields–chemistry, biology, geology, atmospheric physics, evolution and hydrology, to name a few illustrated in this book. By gradually unraveling some of these core concepts and then synthesizing them, the reader gets a fast-tracked breakdown of decades of scientific breakthroughs and predictions for our future climate.

There’s no getting around this, after Bauman presents the science of anthropogenic climate change as understood by today’s experts. Evidence of humanity’s use of dirty fossil fuels is the proven link to the unnatural variability we’re now seeing in our climate. Bauman doesn’t beat around the bush: if we want to avoid runaway climate change, we’ll need incentives to phase out the coal, oil and gas that cause global warming, perhaps by first ending the billions of dollars in annual subsidies taxpayers surrender to these dirty, outdated industries.

Bauman doesn’t turn a blind eye to the vast differences of economic privilege between developed and developing countries. He explicitly states that poorer countries are less responsible for the global warming we have already experienced, and says it’s understandable that developing countries have an expectation of reaching the level of comfort that today’s most privileged countries have. This is crucial for countries like the U.S. to honor, as we [don't] cooperate with other countries on global climate agreements–the only chance we have at addressing a global problem. Bauman reminds us that we’ve done this before, such as the Montreal Protocol’s success in addressing the Ozone hole crisis.

Bauman doesn’t let the individual off the hook. He recognizes that solutions need to be implemented by people as individuals (recycling, eating less meat, driving and flying less), but doesn’t pretend that taming some simple consumer habits will save our climate. Broader solutions are needed to internalized the external costs of climate change. Polluters can’t continue to pollute for free, and fossil fuel prices need to reflect the full costs that they current impose on society in terms of affecting our health, air, water and climate. This means that clean energy and energy efficiency would be cheaper than fossil fuels if we simply accounted for some of today’s most obvious market failures.

Greenpeace isn’t citied or alluded to in this book in any way, but Dr. Bauman sure talks about a lot of our priority campaigns, like our work to stop deforestation in the Amazon and Indonesia, our work to end overfishing, to phase out coal plants in implement clean energy solutions… even Bauman’s one mention of nuclear power as “clean” is strictly from “a climate perspective,” avoiding the nuclear lobby’s characterization dangerous and expensive nukes as some magical panacea to climate change. Since Greenpeace’s globally-integrated work on climate, forests, oceans, pollution and human well-being is best when implemented holistically, it’s nice to see Dr. Bauman connect these dots.

Bauman and Klein’s book was made possible through the support of 309 donors on Kickstarter–the free market of thought has spoken!

Admittedly I’m exceedingly pleased with this book and I have few critical comments, but here they are.

First, as someone who is wary of the public relations war waged against climate scientists by fossil fuel companies and their hydra-like shills, the first few pages of the book made me uncomfortable. Bauman tries to play umpire with climate change deniers by saying things like “Maybe it’s an existential threat… maybe it’s only a minor threat.”

However, I’m only concerned as far as this can be spun by the industry-funded contrarians who will never, ever recognize the reality of climate change science as long as they’re paid not to. Bauman’s commentary is honest and devoid of PR’s Jedi mind tricks. For everyday people who aren’t aware of the state of climate science today, thanks to certain popular radio and TV personalities, Bauman’s approach could indeed help break through ideological predispositions and tour people through the facts.

Second, the book isn’t too clear on the role of nuclear power and carbon-capture and storage in terms of climate change mitigation. Greenpeace’s fresh Energy [R]evolution report maps a path to a clean energy future that doesn’t involve either of these expensive shams. While Bauman doesn’t necessarily advocate for either technology, the topics are introduced without being explored too deeply, which could leave the impression that they are solutions to be taken for granted. They aren’t.

Finally, for the sake of reflecting the proportions of our global population, there could have been more female cartoon characters. Admittedly, they’re all pretty androgenous, but especially since historic characters Milutin Milanković and Charles David Keeling are profiled as breaking ground in studying the Earth’s climate, there felt a lack of womankind’s prominence.

The Power of Humor

Through his love of humor, Dr. Bauman’s career is largely dedicated to promoting economic solutions to the global problem of climate change, primarily through his advocacy of market-based solutions like carbon taxes. This is apparent in Bauman and Klein’s newest work, where British Columbia’s carbon tax is specifically cited as a current model for market-based climate change mitigation. Bauman himself helped BC design its carbon tax, for any skeptics wondering if his work begins and ends with cartoons.

Dr. Bauman’s take on climate change is refreshing from the perspective of a Greenpeace researcher used to tracking climate change deniers (a term he likely wouldn’t wield). Ignoring the handful of scientists and economists who have made the unfortunate decision to block solutions to global warming, Dr. Bauman employs his economic expertise in forward-thinking conversations we need to have as a society that is expending the scarce resources it depends on.

Dire problems shut people down. So does the intangible. We all have enough issues to deal with on our own without the world’s problems being dropped onto our shoulders.

Luckily, Yoram Bauman demonstrates both the patience and the favorable attitude necessary to educate people about ways we can approach these problems with the best information we have available. Grady Klein’s artwork broadens the appeal to people across the gaps of age, wealth and other distinctions that too often leave people out of the conversation.

For parents, educators, students, or anyone with extra time or sheer curiosity, I highly recommend grabbing a copy of The Cartoon Introduction to Climate Change. Yoram Bauman’s book serves as a cost-effective shortcut on the latest climate science and the most basic economic approaches to find solutions.