How Global Warming Can Cause Europe’s Harsh Winter Weather 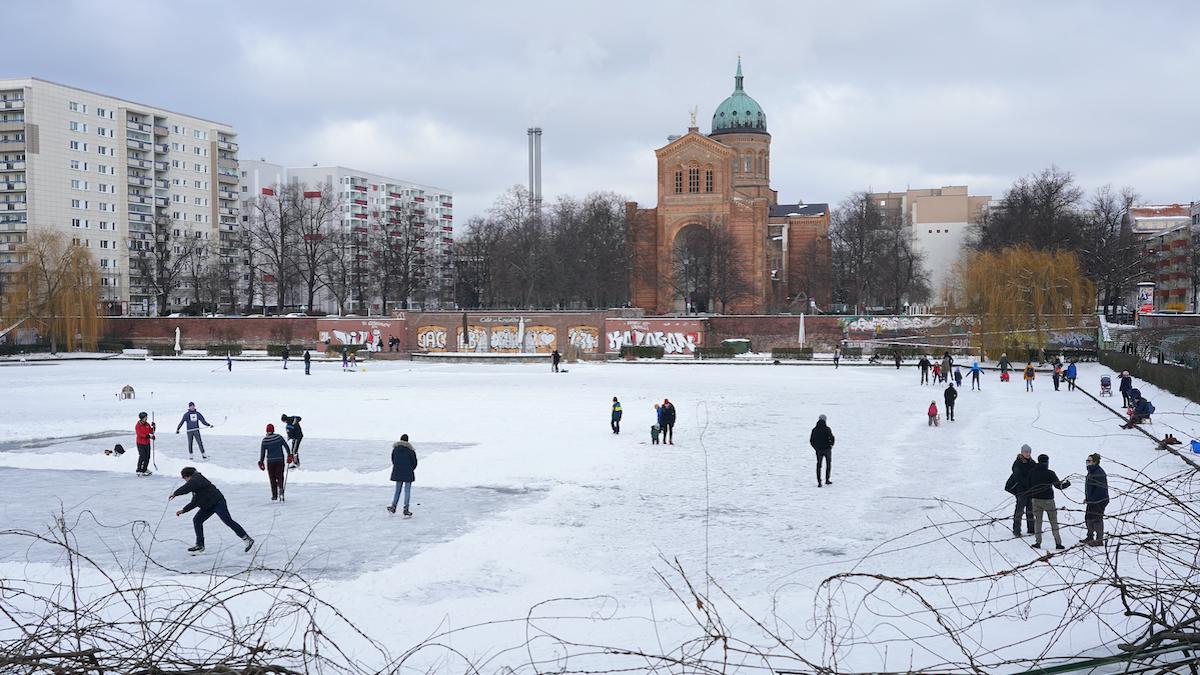 People ice skate on frozen Engelbecken pond in the city center after a severe snow storm swept across Germany earlier in the week, on Feb. 11, 2021 in Berlin, Germany. Sean Gallup / Getty Images

As Germans shiver through double-digit negative temperatures and more than 80 centimeters (30 inches) of snow in parts of the country, climate science deniers have taken to social media to argue that global warming is a hoax.

Their claim — which has been repeatedly debunked by climate scientists — is that extremely cold weather shows that carbon dioxide emissions are not warming the Earth.

In fact, the effects of global warming may even have favored the extremely cold temperature.

Why Is It So Cold?

The past week’s sub-zero temperatures and heavy snowfalls are more than just a cold winter. They are made more likely by the collapse of the polar vortex — a huge ring of cold winds raging in the Earth’s stratosphere — at the North Pole.

The polar vortex is closely connected to the jet stream, a band of strong winds about 10 kilometers above the ground. At the polar front, this flows between warm air from the tropics and subtropics, and cold polar air. The pressure extremes that form in this transitional area at lower layers are sometimes referred to in weather reports as the Icelandic low or the Azores high. 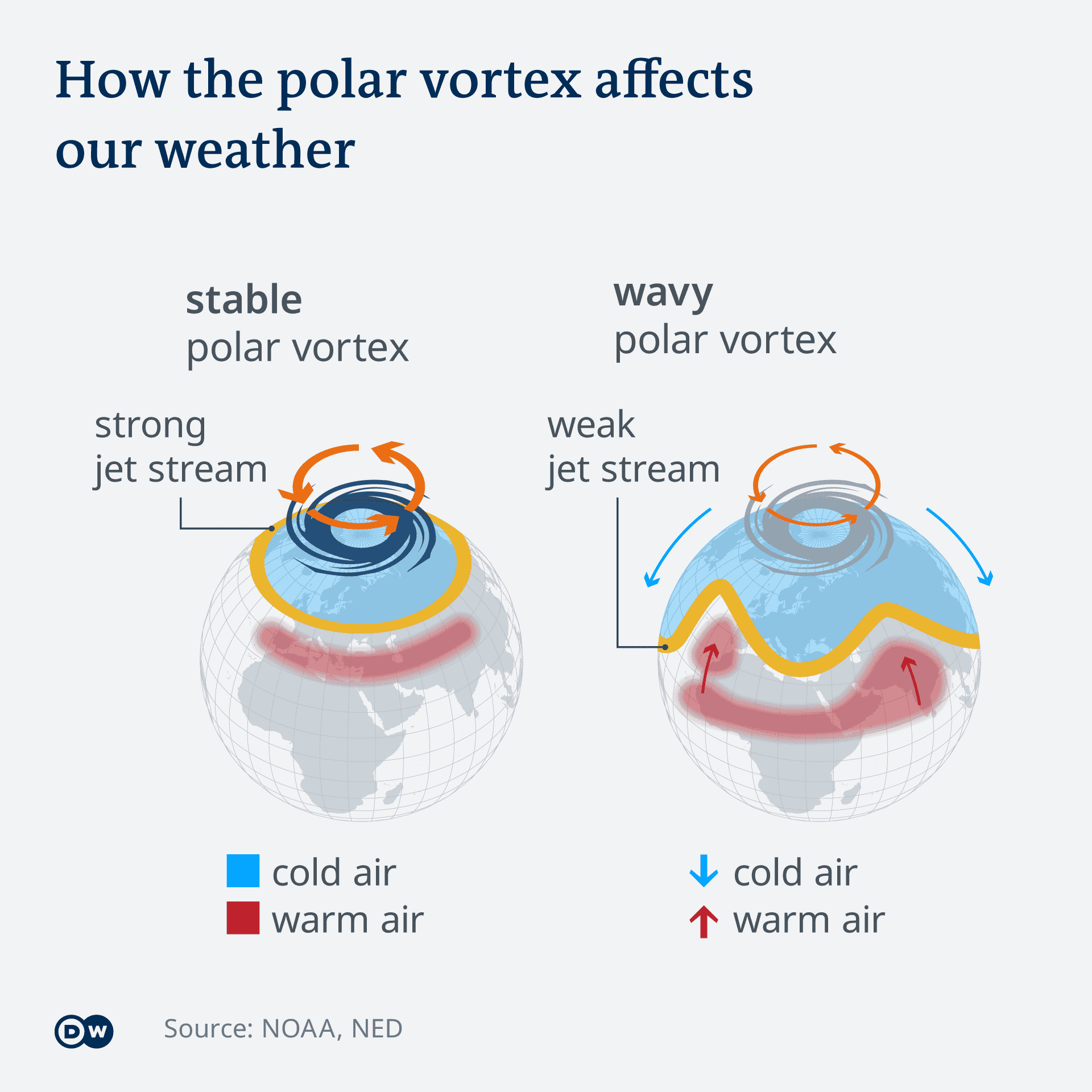 The jet stream usually determines the winter weather in Europe: if it is strong and flows from west to east, it brings mild, windy and rainy weather from the Atlantic, and holds the cold air from the Arctic.

But if the jet stream is weak and wavy, the polar vortex also weakens, and sometimes breaks down completely. The cold snap across Europe is the result of a weak jet stream — more precisely a dip — that has caused a strong and long-lasting collapse of the polar vortex.

How Can Climate Change Make the Weather Colder?

Through the burning of fossil fuels, people have heated the planet by more than 1 degrees Celsius (1.8°F) since the Industrial Revolution. The decade from 2010 to 2019 was the hottest on record. Climate change, however, doesn’t only lead to higher temperatures, but more extreme weather.

This is where the disproportionate warming of the Arctic comes into play, said Stefan Rahmstorf, head of the Earth System Analysis research department at the Potsdam Institute for Climate Impact Research (PIK). Temperatures in the Arctic have risen more than twice as fast as the global average over the past 40 years. “These changes are affecting the weather in Europe.”

The jet stream usually determines the winter weather in Europe: if it is strong and flows from west to east, it brings mild, windy and rainy weather from the Atlantic, and holds the cold air from the Arctic.

But if the jet stream is weak and wavy, the polar vortex also weakens, and sometimes breaks down completely. The cold snap across Europe is the result of a weak jet stream — more precisely a dip — that has caused a strong and long-lasting collapse of the polar vortex.

Arctic warming is particularly strong in winter, said Dörthe Handorf, who researches the physics of the atmosphere at the Alfred Wegener Institute of the Helmholtz Centre for Polar and Marine Research (AWI). “As many studies show, this weakens the jet stream.”

The wind stream begins to fray, said Handorf, which could lead to more dips that affect temperatures in Europe.

Climate change won’t necessarily make European winters colder because the outbreaks of cold air from the polar vortex are sometimes milder than the current cold snap. The Arctic is also not the only part of the world where air currents are changing because of rising temperatures.

Strong warming over the subtropics also affects the jet stream, said Handorf. While the Arctic warming tends to direct the jet stream southwards and cause cold spells in Europe, the subtropical warming generally sends the band northwards. If this is the case, she said, the winter weather in Europe will be milder. Climate models do not yet know which warming trend will dominate in the future, she added.

Why Global Warming Can Lead to Snow

Snow forms when warm, moist air meets very cold air. Over the flatlands in western Europe, the air is rarely cold enough for the volume of snowfall that has blanketed the region this winter.

But on this occasion, an area of high-pressure air called Gisela brought cold Arctic winds to the center of Germany, where it collided with two low-pressure areas called Tristan and Reinhard. As they were carrying warm sea air, the moisture was turned into snow.

Because warmer air holds more moisture, rising temperatures mean air masses will transport more water. This moisture can then become snow wherever it gets cold enough — typically at higher altitudes.

The massive snowfalls in the Alps in the winter of 2019 were also triggered by unusually moist and warm air masses. At that time, said Peter Hoffmann, meteorologist at PIK, the oceans were still quite warm in winter due to the long, hot summer — and so a lot of water evaporated.

The air currents then took it to the Alps, where an enormous amount of wet snow fell at high altitudes, causing chaos on the roads and increasing the risk of avalanches.

What’s the Difference Between Weather and Climate?

Changes in local weather can be different to changes in the global climate. This can cause confusion.

While average temperatures have warmed to record-breaking levels — making regional heatwaves and wildfires more intense — climate change does not make temperatures everywhere rise. In the past 20 years, for example, winters in many areas of temperate latitudes have not been much warmer than the long-term average, said Handorf.

Complex weather systems such as the polar vortex, for instance, could be cooling parts of Europe even as the Arctic warms. And though February may be particularly cold this year, January — compared to the long-term average — might have been too warm.

“Although we don’t always see warming regionally or locally, we have no signs that global warming is weakening,” said Handorf. “On the contrary.”

The changing jet stream also affects summer temperatures, she added. “There are studies that show we also have a more meandering jet stream in summer. And these meanders, these bulges, tend to remain more stationary.” In other words, just like a cold spell in winter, the heat can last for an unusually long time in summer.

If hot Saharan air then reaches Europe through the jet stream, as it did in June 2019, for example, it can cause a long heat wave. During such scorching weeks and months, it seems obvious that the climate crisis is upon us — but the same is true when it snows.

This article was adapted from German by Ajit Niranjan.