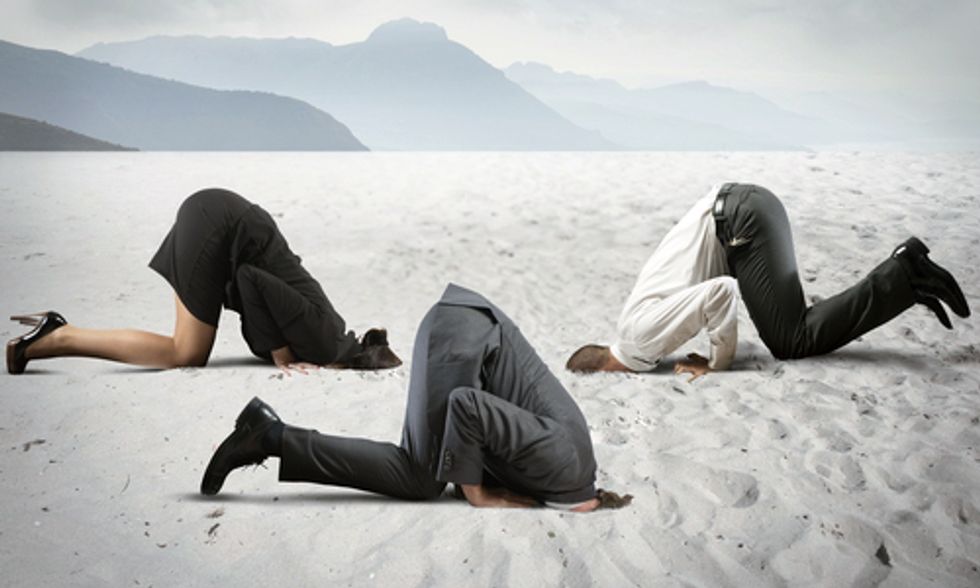 The Heartland Institute's recent International Climate Change Conference in Las Vegas illustrates climate change deniers' desperate confusion. As Bloomberg News noted, "Heartland's strategy seemed to be to throw many theories at the wall and see what stuck." A who's who of fossil fuel industry supporters and anti-science shills variously argued that global warming is a myth; that it's happening but natural—a result of the sun or "Pacific Decadal Oscillation;" that it's happening but we shouldn't worry about it; or that global cooling is the real problem.

Personal attacks are common among deniers. Their lies are continually debunked, leaving them with no rational challenge to overwhelming scientific evidence that the world is warming and that humans are largely responsible.
Photo credit: Shutterstock

The only common thread, Bloomberg reported, was the preponderance of attacks on and jokes about Al Gore: "It rarely took more than a minute or two before one punctuated the swirl of opaque and occasionally conflicting scientific theories."

Personal attacks are common among deniers. Their lies are continually debunked, leaving them with no rational challenge to overwhelming scientific evidence that the world is warming and that humans are largely responsible. Comments under my columns about global warming include endless repetition of falsehoods like "there's been no warming for 18 years," "it's the sun," and references to "communist misanthropes," "libtard warmers," alarmists and worse…

Far worse. Katharine Hayhoe, director of Texas Tech's Climate Science Center and an evangelical Christian, had her email inbox flooded with hate mail and threats after conservative pundit Rush Limbaugh denounced her, and right-wing blogger Mark Morano published her email address. "I got an email the other day so obscene I had to file a police report," Hayhoe said in an interview on the Responding to Climate Change website. "They mentioned my child. It had all kinds of sexual perversions in it—it just makes your skin crawl."

One email chastised her for taking "a man's job" and called for her public execution, finishing with, "If you have a child, then women in the future will be even more leery of lying to get ahead, when they see your baby crying next to the basket next to the guillotine."

Many attacks came from fellow Christians unable to accept that humans can affect "God's creation." That's a belief held even by a few well-known scientists and others held up as climate experts, including Roy Spencer, David Legates and Canadian economist Ross McKitrick. They've signed the Cornwall Alliance's Evangelical Declaration on Global Warming, which says, "We believe Earth and its ecosystems—created by God's intelligent design and infinite power and sustained by His faithful providence—are robust, resilient, self-regulating, and self-correcting, admirably suited for human flourishing, and displaying His glory. Earth's climate system is no exception." This worldview predetermines their approach to the science.

Lest you think nasty, irrational comments are exclusively from fringe elements, remember the gathering place for most deniers, the Heartland Institute, has compared those who accept the evidence for human-caused climate change to terrorists. Similar language was used to describe the U.S. Environmental Protection Agency in a full-page ad in USA Today and Politico from the Environmental Policy Alliance, a front group set up by PR firm Berman and Company, which has attacked environmentalists, labour-rights advocates, health organizations—even Mothers Against Drunk Driving and the Humane Society—on behalf of funders and clients including Monsanto, Wendy's and tobacco giant Phillip Morris. The terrorism meme was later picked up by Pennsylvania Republican congressman Mike Kelly.

It's time to shift attention from those who sow doubt and confusion, either out of ignorance or misanthropic greed, to those who want to address a real, serious problem. The BBC has the right idea, instructing its reporters to improve accuracy by giving less air time to people with anti-science views, including climate change deniers.

Solutions exist, but every delay makes them more difficult and costly.