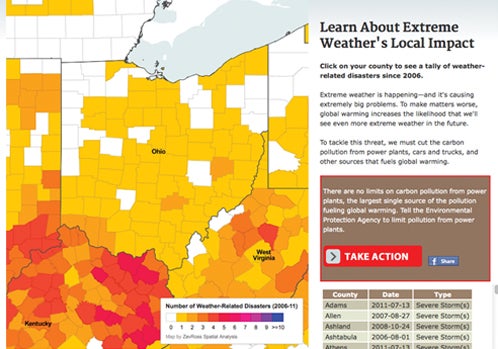 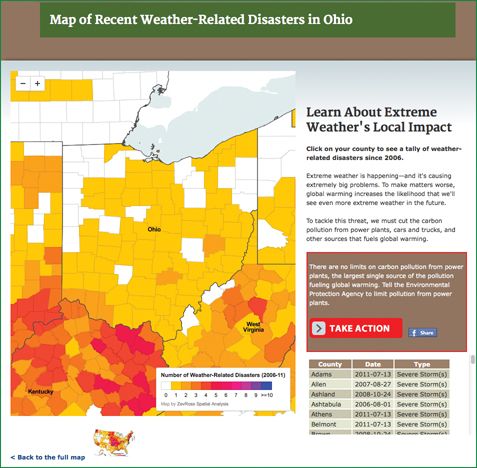 After a year that saw many parts of the country hit by scorching heat, devastating wildfires, severe storms and record flooding, a new Environment Ohio report documents how global warming could lead to certain extreme weather events becoming even more common or more severe in the future. The report found that, already four out of five Ohioans live in counties affected by federally declared weather-related disasters since 2006.

“Millions of Ohioans have lived through extreme weather causing extremely big problems for Ohio’s economy and our public safety,” said Julian Boggs, Environment Ohio policy advocate. “Given that global warming will likely fuel even more extreme weather, we need to cut dangerous carbon pollution now.”
The new report, entitled In the Path of the Storm: Global Warming, Extreme Weather, and the Impacts of Weather-Related Disasters in the United States, examined county-level weather-related disaster declaration data from the Federal Emergency Management Agency (FEMA) for 2006 through 2011 to determine how many Ohioans live in counties hit by recent weather disasters. The complete county-level data can be viewed through an interactive map on www.environmentohio.org.

The report also details the latest science on the projected influence of global warming on heavy rain and snow, heat, drought and wildfires, and hurricanes and coastal storms.  Finally, the report explores how the damage from even non-extreme weather events could increase due to other impacts of global warming such as sea level rise.

Key findings from the report include:
• Since 2006, federally declared weather-related disasters affected 66 counties in Ohio, housing nearly 9.5 million—or nearly four out of five Ohioans. Since 2006, Hamilton County has experienced two federally declared weather-related disasters. Recent weather-related disasters in Hamilton County included Ohio River flooding in 2011 and Hurricane Irene in 2008.
• Nationally, federally declared weather-related disasters have affected counties housing 242 million people since 2006—or nearly four out of five Americans.
• Other research shows that the U.S. has experienced an increase in heavy precipitation events, with the rainiest one percent of all storms delivering 20 percent more rain on
average at the end of the 20th century than at the beginning. The trend towards extreme precipitation is projected to continue in a warming world, even though higher temperatures and drier summers will likely also increase the risk of drought in between the rainy periods and for certain parts of the country.
• Records show that the U.S. has experienced an increase in the number of heat waves over the last half-century. Scientists project that the heat waves and unusually hot seasons will likely become more common in a warming world.
• Other research predicts that hurricanes are expected to become even more intense and bring greater amounts of rainfall in a warming world, even though the number of hurricanes may remain the same or decrease.

“As our human influence changes the climate, which we know is happening due primarily to burning of fossil fuels and land-use changes, we are essentially loading the dice toward more severe weather events. Our best path forward will very likely be a change in our energy system over the next few decades with a strong emphasis on energy efficiency improvements and integration of renewable energy technologies,” said Professor Brecha.

The report was released as the Obama administration is finalizing historic new carbon pollution and fuel efficiency standards for cars and light trucks, and as the U.S. Environmental Protection Agency is poised to develop carbon pollution standards for coal-fired power plants—the largest single source of the carbon pollution that is fueling global warming. At the same time, some polluting industries and their allies in Congress are working to block these and other clean air standards.

“We applaud the Obama administration for the clean car standards they are finalizing, and urge EPA to move ahead with strong carbon pollution standards for coal-fired power plants,” said Boggs. “The extreme weather we suffered through in 2011 is a frightening reminder of why we must do everything we can to cut the dangerous carbon pollution that is fueling global warming, and lessen the threat of even worse extreme weather in the future.”

Environment Ohio is a state-wide, citizen-based, environmental advocacy organization. To view the full report or for more information, visit www.environmentohio.org.