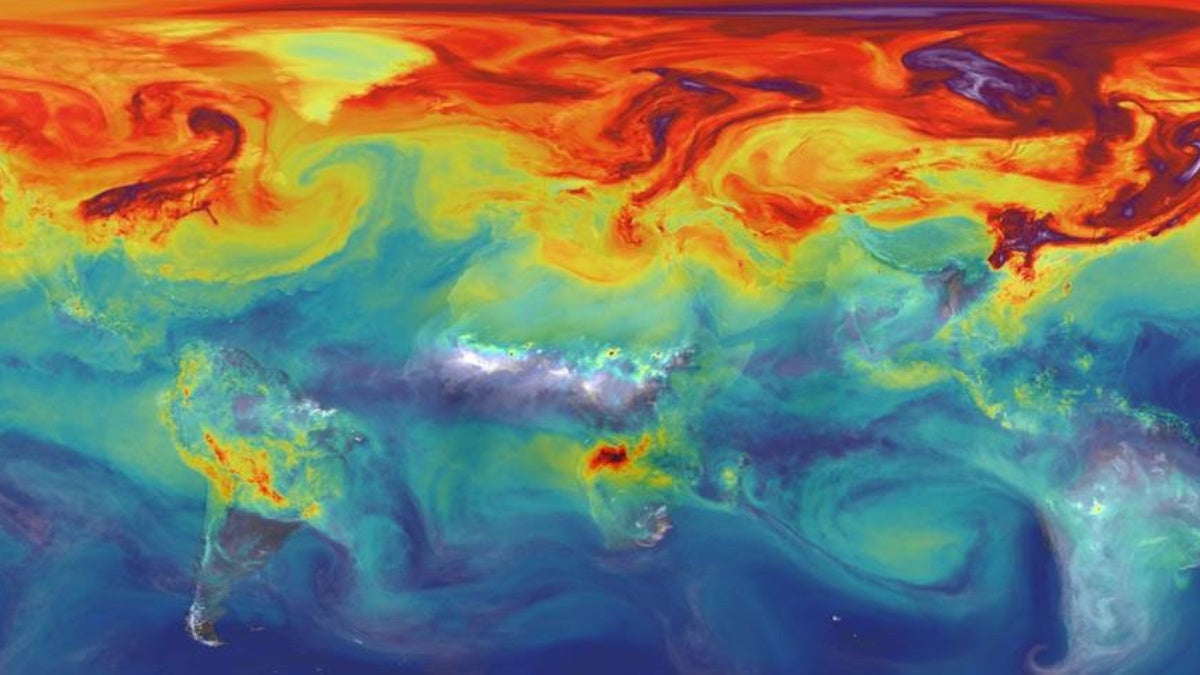 NASA is advancing tools like this supercomputer model that created this simulation of carbon dioxide in the atmosphere to better understand what will happen to Earth's climate if the land and ocean can no longer absorb nearly half of all climate-warming CO2 emissions. NASA/GSFC

For the past year, some of the most up-to-date computer models from the world’s top climate modeling groups have been “running hot” – projecting that global warming may be even more extreme than earlier thought. Data from some of the model runs has been confounding scientists because it challenges decades of consistent projections.

“It is concerning, as it increases the risk of more severe climate change impacts,” explains Dr. Andrew Gettelman, a cloud microphysics scientist from the National Center for Atmospheric Research, in Boulder, Colorado.

As a result, there’s been a real urgency to answer this important question in climate science: Are there processes in some new models that need correcting, or is this enhanced warming a real threat?

After months of contemplation and study after study, the picture is becoming much more clear, and providing something of a breather. Along with those studies, an unprecedented international research mission, led by NOAA and named ATOMIC, aims to provide climate science with the most sophisticated insights yet into why some models point to more warming.

For the past 25 years the international community has been evaluating and comparing the world’s most sophisticated climate models produced by various teams at universities, research centers, and government agencies. The effort is organized by the World Climate Research Programme under the United Nations World Meteorological Organization.

Climate models are complicated computer programs composed of millions of lines of code that calculate the physical properties and interactions between the main climate forces like the atmosphere, oceans, and solar input. But models also go a lot further, incorporating other systems like ice sheets, forests, and the biosphere, to name a few. The models are then used to simulate the real-world climate system and project how certain changes, like added pollution or land-use changes, will alter the climate.

Every few years there is a new comprehensive international evaluation called the Coupled Model Intercomparison Project (CMIP). In the sixth such effort, known as CMIP6 and now under way, experts are reviewing about 100 models.

Information gleaned from this effort will act as a scientific foundation for the U.N.’s Intergovernmental Panel on Climate Change (IPCC) next major assessment report, scheduled for release in 2021. The goal of the report – the sixth in 30 years – is to inform the international community about how much the climate has changed, and, importantly, how much change can be expected in coming decades.

Over the past year, the CMIP6 collection of models being reviewed threw researchers an unexpected curveball: a significant number of the climate model runs showed substantially more global warming than previous model versions had projected. If accurate, the international climate goals would be nearly impossible to achieve, and there would be significantly more extreme impacts worldwide.

A foundational experiment in every report addresses “sensitivity”: If you double levels of carbon dioxide (CO2) that were in the air before the Industrial Revolution, how much warming do the models show? This doubling is not expected for a few more decades, but it is a quick way to communicate the critical role of greenhouse gases in changing the climate.

The amount of CO2 in the atmosphere has increased by 35% since the 1800s because of the burning of fossil fuels. As a result, global temperatures have already increased by more than 2 degrees Fahrenheit.

In the first IPCC assessment report, published in 1990, the answer to that question about the impact of doubling carbon dioxide gave a fairly wide range of results – between 2.7-8 degrees F of global warming. Since then, four more assessments issued six to seven years apart reached nearly the exact same conclusion on sensitivity.

But that sensitivity may, for the first time, change significantly in next year’s assessment. Why? Because starting last year, numerous models in the CMIP6 collection displayed even bigger spikes in temperature upon doubling of CO2 concentrations. We’re in serious trouble if the climate sensitivity falls in the mid or upper range of the previous assessments. But if the new, higher estimates are correct, the impacts on civilization would be catastrophic.

What's the latest on climate sensitivity in the latest climate models? Working from the latest compilation, it's… peculiar. pic.twitter.com/I19o2lMob0

According to the highly regarded climate site Carbon Brief, which did an independent evaluation of the model suite, 30% of models showed a significant increase in their sensitivity to a doubling of atmospheric CO2. 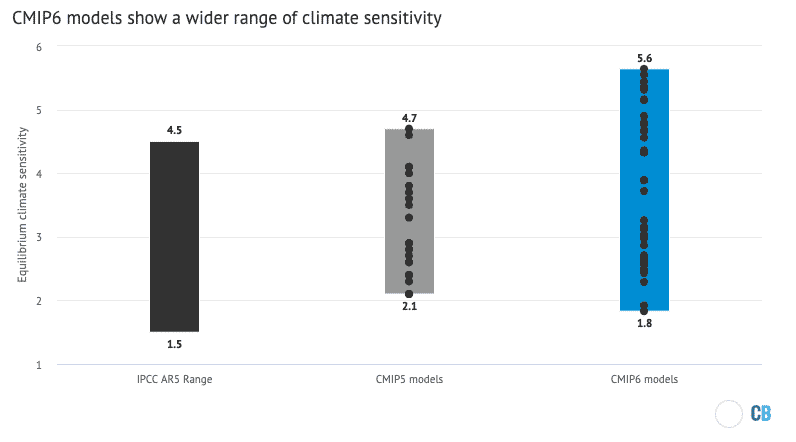 In the above CarbonBrief interactive visualization, the bars offer a comparison in the range of sensitivity in the CMIP5 models (gray) and CMIP6 models (blue).

New and Encouraging Evidence Is Emerging

At first, scientists were uncertain whether the new model runs were on to something, so the international modeling community dug in to produce multiple studies. The results are not yet conclusive, but a gradual collective sigh of relief seems to be materializing.

“Evidence is emerging from multiple directions that the models which show the greatest warming in the CMIP6 ensemble are likely too warm,” explains Dr. Gavin Schmidt, director of NASA’s Goddard Institute for Space Studies.

For example, a study released April 28 evaluated the past performance of the models making up the CMIP6 ensemble. The team assigned weights to each model based upon historical performance of their warming projections, weighing the poorer performing models less. By doing so, both the mean warming and the range of warming scenarios in the CMIP6 ensemble decreased, meaning the warmest models were the ones with weaker historical performance. This result supports a finding that a subset of the models are too warm.

That conclusion is supported by another new study evaluating one particular model – the Community Earth System Model (CESM2) – that showed greater warming. Using that model, the researchers simulated the climate in the early Eocene era, about 50 million years ago, when rainforests thrived in the Arctic and Antarctic. The CESM2 simulated a historical climate that seems way too warm compared with what is known about that era from geological data, indicating that the model is likely also too warm in its future projections.

Through the intensive research spurred by the CMIP6 climate-sensitivity curveball, scientists have been able to turn a confounding challenge into a confidence builder, providing even greater certainty than they had before in both the abilities of the climate science community and in the computer models used. Moreover, the experience has helped unearth uncertainties remaining in the modeling process.

Experts conclude much of this uncertainty probably lies in the complexity of clouds. “We have been looking as a community at why the models with greater warming are doing what they are doing – and it’s tied to cloud feedbacks in the southern mid-latitudes mostly,” explains Schmidt.

In fact, a new study addressing the increased sensitivity was published in Science Advances stating, “Cloud feedbacks and cloud-aerosol interactions are the most likely contributors to the high values and increased range of ECS [sensitivity] in CMIP6.”

Understanding the Complexity of Clouds

It’s long been known in climate modeling circles that cloud processes and interactions are a potential weak link for climate modeling. That reality has been brought front and center by the urgent challenges posed during this CMIP6 evaluation period, but the current evaluation of models also provides an opportunity for discovery and improvement.

Cloud complexity comes from the reality that clouds have a multitude of sizes, altitudes, and textures. Some clouds cool Earth by providing shade, reflecting sunlight back into space. Others act like a blanket, trapping heat and warming the world.

Given that about 70% of the globe is covered by clouds at any given time, it’s no surprise that they play an integral role in regulating the climate. The challenge is to figure out which types of clouds will increase, which will decrease, and what the net effect will be on cooling or warming as the climate changes.

One study last year reached an alarming conclusion: Left unchecked, the release of CO2 into the atmosphere may lead to a tipping point where shallow low clouds disappear – leading to runaway, catastrophic warming of nearly 15 degrees F. While scientists see that outcome as only a remote possibility, it drives home the urgent need to better understand clouds.

“We have a saying at NOAA: It isn’t rocket science – it’s much, much harder than that,” quips Dr. Chris Fairall, ATOMIC’s lead investigator. “One of the major problems for modeling is there is not clean separation of scales.” The photo below is one that Fairall took from the NOAA P-3 aircraft.

“Think about trying to code up a model that can produce this,” Fairall muses. “Huge cloud systems are made up of a spectrum of clouds from the size of Kansas to ones that fit in the trunk of your Volkswagen.”

In the real world and the simulated model world, cloud formation depends partially on how moisture interacts with aerosols, tiny floating particles in the air. Aerosols are fine particles like smoke, sea spray, and pollutants. These tiny dust-like particles act as condensation nuclei, allowing gaseous water vapor to turn into cloud droplets.

The interplay between clouds, aerosols, and a warming climate in a model affects how much of a cooling or warming influence that model calculates.

Recently a new international dataset of emissions – including changes in the concentrations of aerosols – has been introduced into some climate models with improved cloud physics. As a result, some scientists conclude, the changes have affected cloud dynamics in these models, leading to additional warming.

But despite the increased confidence that a subset of the CMIP6 models are likely overdoing warming projections, Gettelman believes there is at least some merit to the warmer projections because this generation of models has more sophisticated cloud physics.

So in order to get to the bottom of cloud complexity and improve these vital model projections, the international community is collaborating on a massive research project.

Investigating the Secrets of Clouds

To address the urgent question about the dynamics and role of clouds in a warming world, NOAA and European partners launched their ongoing research effort unprecedented in scale. The U.S. contribution, ATOMIC – short for Atlantic Tradewind Ocean-Atmosphere Mesoscale Interaction Campaign – is an international science mission that was featured recently on “CBS This Morning: Saturday.” 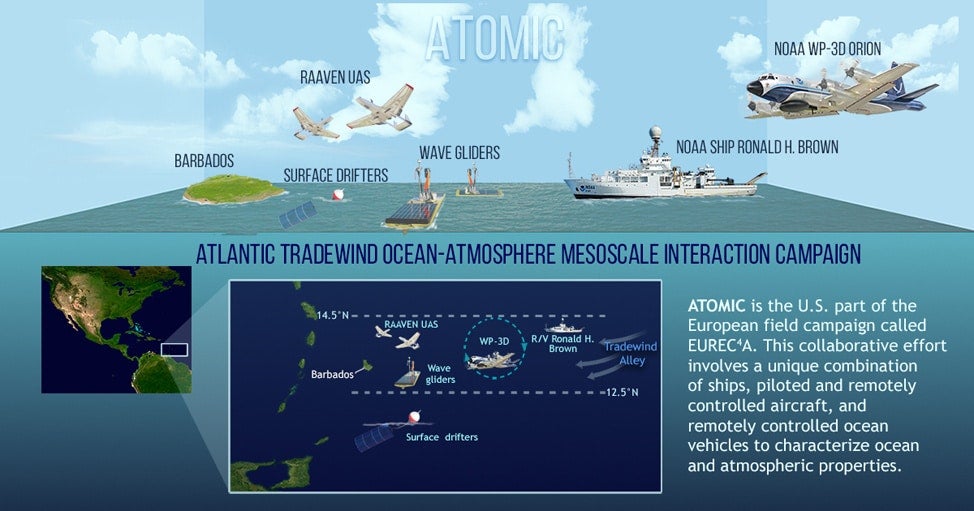 “The research that originally motivated this project was an analysis that showed that the single biggest factor that separated the CMIP models into big warming and not so big warming was treatment of shallow convective clouds,” Fairall explains.

The best places to find shallow convective clouds are tropical waters. So in February, a group of scientists from more than 40 partner institutions from countries including the U.S., Germany, France, and the U.K. painstakingly probed hundreds of miles of tropical air and sea near the island of Barbados. They used every tool in their arsenals: five research aircraft, four large fact-finding vessels, buoys, radar and futuristic air and ocean drones to examine the makeup of these complicated and crucial clouds.

Scientists expect that the vast, concurrent and diverse types of observations captured in ATOMIC will allow them to improve how clouds are represented in climate models, enabling them to make more precise predictions of future climate and impacts.

On the whole, however, these unprecedented research efforts to troubleshoot discrepancies in the latest models have already borne critical fruit. They are providing scientists with more insights, illustrating the crucial value of the scientific method, lending credibility to the capability of climate models, and helping build more confidence within the climate science community.