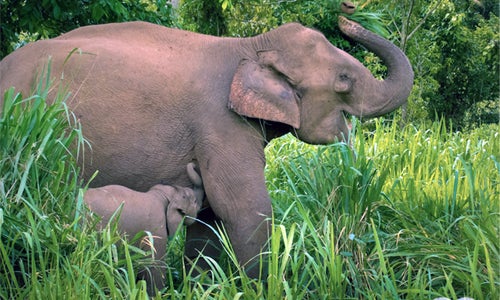 Maybe baby steps will help, but the world needs a lot more than either the U.S. or China is offering to combat the illegal traffic in wildlife, a nearly $20-billion-a-year business that adds up to a global war against nature. As the headlines tell us, the trade has pushed various rhinoceros species to the point of extinction and motivated poachers to kill more than 100,000 elephants since 2010. 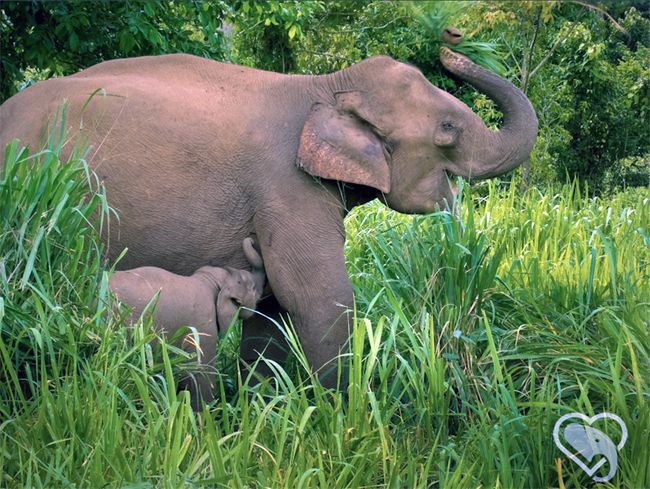 Last month China announced that it would ban ivory imports for a year, while it “evaluates” the effectiveness of the ban in reducing internal demand for ivory carvings on the current slaughter of approximately 100 African elephants per day. The promise, however, rings hollow following a report in November (hotly denied by China) that Chinese diplomats used President Xi Jinping’s presidential plane to smuggle thousands of pounds of poached elephant tusks out of Tanzania.

Meanwhile, the Obama administration has launched its own well-meaning but distinctly inadequate initiative to curb the trade. Even if you missed the roll-out of that policy, you probably know that current trends are leading us toward a planetary animal dystopia, a most un-Disneyesque world in which the great forests and savannas of the planet will bid farewell to the species earlier generations referred to as their “royalty.” No more King of the Jungle, while Dorothy’s “Lions and tigers and bears, oh my!” will truly be over the rainbow. And that’s just for starters.

The even grimmer news that rarely makes the headlines is that the lesser subjects of that old royalty are vanishing, too. Though largely unacknowledged, the current war is far redder in tooth and claw than anything nature has to offer. It threatens not just charismatic species like elephants, gibbons, and rhinos, but countless others with permanent oblivion.

If current trends hold, one day not so very long from now our children may think of the T. rex and the tiger as co-occupants of a single Lost World, accessible only in dreams, storybooks, and the movies. Sure, some of the planet’s present megafauna will be bred in zoos for as long as society produces enough luxury to maintain such institutions. Even the best zoo, however, is but a faint simulacrum of wild habitat and its captives are ghosts of their free-roaming forebears.

That’s why the Obama administration deserves some credit for highlighting the urgent need to curb the wildlife trade. Its plan calls for using assets of the National Intelligence Council to advance enforcement efforts. Unfortunately, the administration proposes boosting the enforcement budget of the U.S. Fish and Wildlife Service, the agency with primary responsibility in this area, by only $8 million. Such an increase would lift its force of inspectors just slightly above the levels of 30 years ago when the illicit trade in wildlife was far smaller.

To grasp the breadth of the carnage now going on, it’s essential to realize that the war against nature is being waged on an almost infinite number of planetary fronts, affecting hundreds of species, and that the toll is already devastating. Among the battlefields, none may be bloodier than the forests of Southeast Asia, for they lie closest to China, the world’s most ravenous (and lucrative) market for wildlife and wildlife parts.

China’s taste for wildlife penetrates even the least visited corners of the region, where professional poachers industriously gather live porcupines and turtles, all manner of venison, monkey hands, python fat, pangolin scales, otter skins, gall bladders, antlers, horns, bones and hundreds of other items. These goods, dead or alive, are smuggled to markets in China and elsewhere. Meanwhile, an expanding economy enables ever more millions of people to purchase expensive animal commodities they believe might stave off disease or provide the fancy restaurant meals that will impress in-laws and business associates.

To put the present war in perspective, think of it this way: every year, more and more money chases fewer and fewer creatures.

Slaughter at the Ground Level

In a typical forest in Southeast Asia you might encounter a snare line stretching a kilometer or more along a mountain ridge or running down one side of a canyon and all the way up the other. These barriers are waist-high walls of chopped brush, with gaps every few meters. They are hedges of death.

Almost any mammal traveling in this landscape, if larger than a tree shrew (which would fit in a modest handbag), sooner or later will have to pass through one of these gaps, and in each a snare awaits. Powered by a bent-over sapling, it lies beneath a camouflage of leaves and hides a loop of bicycle brake cable—or truck winch cable for larger animals like tigers. The trigger controlling each snare is made of small sticks and can be astonishingly sensitive. I’ve seen snares set for deer and wild pig that were no less capable of capturing creatures as light of foot as a jungle fowl, the wild cousin of the domestic chicken, or a silver pheasant, the males of which shimmer in the dusky forest like bundles of fallen moonbeams.

On an expedition to central Laos, my companions and I made our way into a forest distinguished mainly by its remoteness. The Vietnamese border lay perhaps a dozen kilometers to the east, closer by far than the nearest village, four days’ hard march away, where we’d recruited the guides and porters traveling with us. That village, in turn, lay two days by foot and motorized pirogue from the end of the nearest road. The head of our expedition, conservation biologist William Robichaud, the only other westerner in our group of 14, told me that, unless a distressed American pilot had parachuted into the sprawling watershed that lay before us during the Vietnam War, ours were the first blue eyes that had glimpsed it.

Isolation, however, failed to protect the canyons and ridges we surveyed. Evidence lay everywhere of commercial poachers who had crossed the mountains from Vietnam to feed the Chinese market. In a matter of days, we collected wires from almost a thousand snares. In them, we found the decaying carcasses of ferret badgers, hog badgers, mongooses, various species of birds, and several critically endangered large-antlered muntjacs, a species of barking deer, one of which, in its struggle to free itself, had pulled off its own foot before dying nearby.

We camped by fish-rich rivers that had been stripped of their otters and saw the remains of dozens of poachers’ camps, some elaborately equipped with butchering tables and smoking racks. Saddest of all was the sight of a red-shanked douc (also called a douc langur), perhaps the most beautiful monkey in the world, dangling upside down at the end of a snare pole, having succumbed to as slow and cruel a death as might be imagined.

The indiscriminant wastefulness of this massive trapping enterprise is hard to absorb even when you see it yourself. Poachers check their snare lines haphazardly and leave them armed when they depart the area. This means the killing goes on indefinitely, no matter if the bodies languish and rot.

A Unicorn Still in the Wild?

Though we were in that forest in part to remove snares and assess the nature of the ongoing damage, our main goal was to find a unicorn—or actually an animal almost as rare, a creature that might indeed have already moved, or might soon move, from Earth’s natural realms to the realm of mythology. We were searching for any sign of saola (Pseudoryx nghetinhensis), one of the rarest large mammals on the planet. Its very existence, though known to locals, was revealed to science only in 1992, when researchers spotted a strange set of horns on the wall of a hunter’s shack high in the mountains of Vietnam.

Saola proved to be much more than a new species. It represented a new genus, possibly even a new taxonomic tribe, although the jury is still out on that. A kind of bovid, a ruminant with cloven hooves, its nearest evolutionary relatives appear to be wild cattle, yet it looks nothing like a cow or bison. A saola stands a little higher than a carousel pony. Deer-like, but thicker in form, its powerful build helps it push through the densest vegetation. Its muzzle is splashed with camo patterns of white, and its tri-colored tail—white, chocolate brown, and black—blends with similar bands of color on its rump. Its long, nearly straight horns are elegantly tapered, and in profile they seem to blend into a single horn, giving the creature the otherworldly look of a unicorn.

At best, the existing population of saola numbers between a few dozen and a few hundred, making it nearly as rare and hard to find as a unicorn. Even stranger, its disposition, except when the animal is directly threatened, appears to be as gentle as that of the unicorns of medieval European lore.

In 1996, Robichaud spent two weeks in a rough crossroads town in central Laos observing a captive saola. The unfortunate creature did not survive long in the menagerie in which it was held—no saola has lasted more than a few months in confinement and none is held anywhere today—but he had ample opportunity to note that it reacted alertly, even violently, to the presence of a dog outside its enclosure. (Wild dogs, or dholes, are among its natural enemies.)

Eerily, however, the saola was calm in the presence of humans—far more so than the barking deer or the serow (a species of mountain goat) in nearby cages, even though they had been in the menagerie far longer. Captured in the wild just before Robichaud arrived, the saola proved calmer than any domestic goat, sheep, or cow he had known from farms in his native Wisconsin. The captive saola even let him pick ticks from its ears. Local information buttressed Robichaud’s sense of the creature’s almost unearthly serenity. A Buddhist monk from a nearby temple told him that people in the area had dubbed the creature “sat souphap,” which translates roughly as “the polite animal.”

Today, no one knows if the clock of extinction for the species stands at two minutes before midnight or two minutes after. The greatest threat to its survival is the kind of snaring we witnessed on our expedition, which is doubly tragic, for saola do not appear to be a target of the poachers. In spite of its exotic horns, the animal is unknown in traditional Chinese medicine. (Its omission from that medical tradition’s encyclopedic command of Asian fauna and flora testifies to its profound isolation from the rest of the world.) Rather, the last living remnants of the species risk being taken as by-catch, like sea turtles in a shrimper’s net.