Global Study Shows U.S. Is 1 of 5 Nations Without Climate Legislation 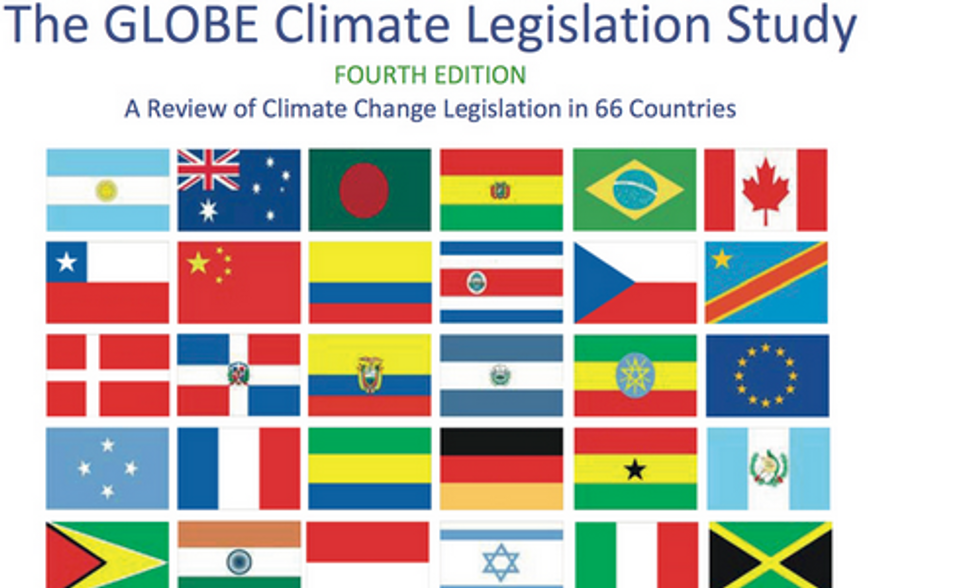 When the Global Legislators Organization (GLOBE) surveyed the 66 countries that together are responsible for 88 percent of the manmade greenhouse gas emissions around the world, it noticed one glaring fact.

Sixty-one of those countries had legislation on the books to decrease carbon pollution and promote clean energy, but the U.S. was not one of them.

GLOBE issued its fourth Climate Legislation Study today, which reviews 500 pieces of legislation passed by those 61 countries. The 700-page report, presented in conjunction with the Grantham Research Institute at the London School of Economics and Political Science, includes extractions based on each country.

"Although there were a number of attempts to pass a comprehensive climate change bill in the 111th Congress (2009-2010)–the most significant of which was the American Clean Energy and Security Bill, referred to as the “Waxman-Markey Bill,” which passed the House of Representatives in June 2009–all attempts for the House and the Senate to agree on climate legislation have failed," the report reads.

The report also characterized the nation's greenhouse gas emissions reduction targets—which, according to GLOBE, amounts to less than 5 percent below 1990 levels by 2020—as "relatively modest when compared with other advanced economies."

The organization didn't beat up on the U.S., though. It points out that the country's legislative process is complex and that officials, for now, are trying to take a regulatory approach to climate change by using existing bills like the Clean Air Act and executive orders. The U.S. Supreme Court is currently evaluating the U.S. Environmental Protection Agency's (EPA) powers within the Clean Air Act.

"Although the current administration and the [EPA] have consistently said they would prefer that Congress pass legislation to address climate change, the difficulties in securing support for comprehensive climate change legislation have meant that the regulatory approach has assumed greater importance," the report reads.

The trouble, GLOBE says, has come when the House passed bills to restrict the authority of the EPA to regulate emissions, to expand production of fossil fuels and to approve the Keystone XL pipeline. President Obama has said he would would veto proposals that prohibit EPA action on greenhouse gases, and the Senate has rejected such proposals, as well.

The U.S. extraction of the report goes on to review climate-related executive orders like the Federal Leadership in Environmental, Energy and Economic Performance of 2009 and the Food, Conservation and Energy Act from the prior year.

"We can act to avoid the worst effects of climate change, but time is running out," Christiana Figueres, executive secretary of United Nations Framework Convention on Climate Change, wrote in the report's executive summary.

"Capturing our opportunity to stabilize the climate system, achieve the internationally agreed goal of limiting warming to less than 2 degrees Celsius and safeguard development for future generations requires immediate action by leaders in every country and every sector."