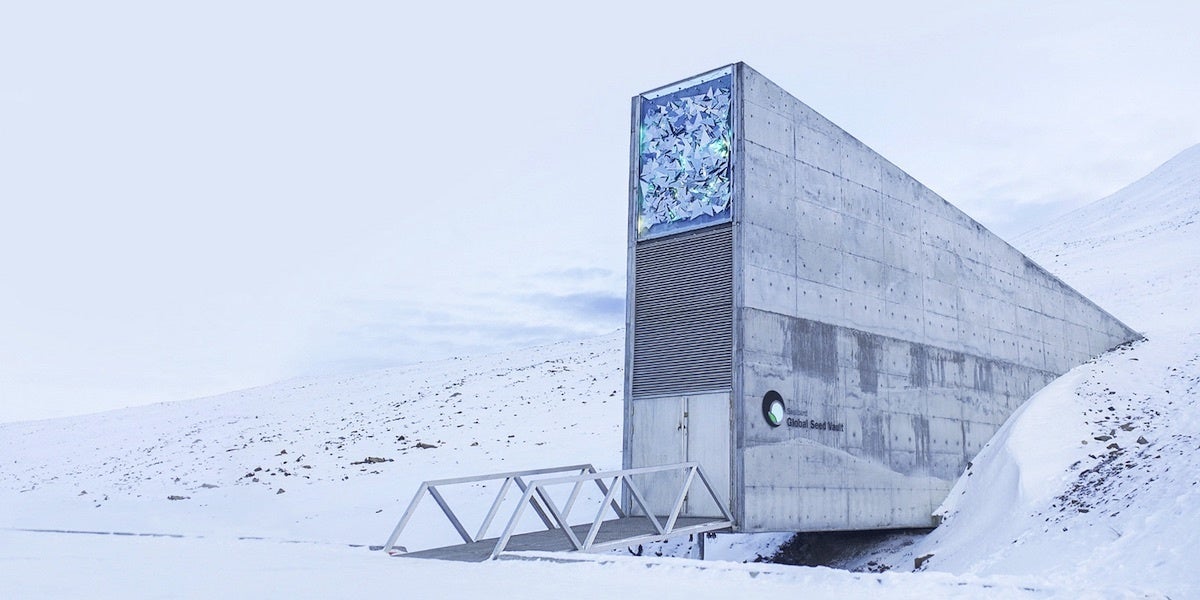 The Svalbard Global Seed Vault in the Arctic Circle—also known as the “doomsday vault” safeguarding the world’s most diverse collection of seeds—now holds 1,059,646 unique crop varieties after receiving more than 70,000 samples on Monday.

Depositors from 23 seed banks around the world braved sub-zero temperatures to deliver duplicate seeds of vital staples such as rice, wheat and maize; black-eyed pea, a major protein source in Africa and South Asia; and samples of sorghum, pearl millet and pigeon pea. Several lesser-known crops such as the Estonian onion potato and the Bambara groundnut, a drought-tolerant crop being developed in Africa, also made the journey.

“Hitting the million mark is really significant,” Hannes Dempenwolf, senior scientist of the Crop Trust, an international organization that funds and manages a global system of seed collections, told BBC.

“Only a few years back I don’t think we would have thought that we would get there.”

Monday also marked the tenth anniversary of the Global Seed Vault. The vault, located on the side of a mountain on a remote Norwegian island, is designed to safeguard the planet’s precious seed varieties against loss of crop diversity caused by climate change, natural disasters or war.

Deliveries are made several times a year from countries that include the U.S., Australia, Burundi, Colombia, Germany, India, Japan, North Korea, Russia and many others.

“The Svalbard Global Seed Vault is an iconic reminder of the remarkable conservation effort that is taking place every day, around the world and around the clock—an effort to conserve the seeds of our food crops,” said Marie Haga, executive director of the Crop Trust, in a statement.

“Safeguarding such a huge range of seeds means scientists will have the best chance of developing nutritious and climate- resilient crops that can ensure future generations don’t just survive, but thrive.”

The seed vault on the Norwegian archipelago #Svalbard represents a global assurance for genetic diversity and #foodsecurity .We congratulate the vault with its 10 year anniversary?#seedvault10 #arctic @GlobalSeedVault @landbrukogmat @NordGen pic.twitter.com/knPu8F4Lyz

The vault can store up to 4.5 million varieties of crops. Each variety contains an average of 500 seeds, which amounts to a maximum capacity of 2.5 billion seeds.

Last year, the vault suffered flooding after warmer-than-average temperatures caused a layer of permafrost to thaw. No seeds were damaged, but the Norwegian government is working to protect the vault against increasingly extreme weather. Norway announced Friday it plans to spend $13 million on upgrades that will cover “construction of a new, concrete-built access tunnel, as well as a service building to house emergency power and refrigerating units and other electrical equipment that emits heat through the tunnel,” the Agriculture Ministry said in a statement.

“The tenth anniversary is a major milestone for the Svalbard Global Seed Vault,” said Jon Georg Dale, the Minister of Agriculture for the Norwegian government, which jointly runs the facility with the Crop Trust and the Nordic Genetic Resource Center.

“It comes at a time when agriculture is facing multiple challenges from extreme weather and the demands of a world population expected to reach 10 billion people by 2050. This means it is more important than ever to ensure that seeds—the foundation of our food supply and the future of our agriculture—are safely conserved.”