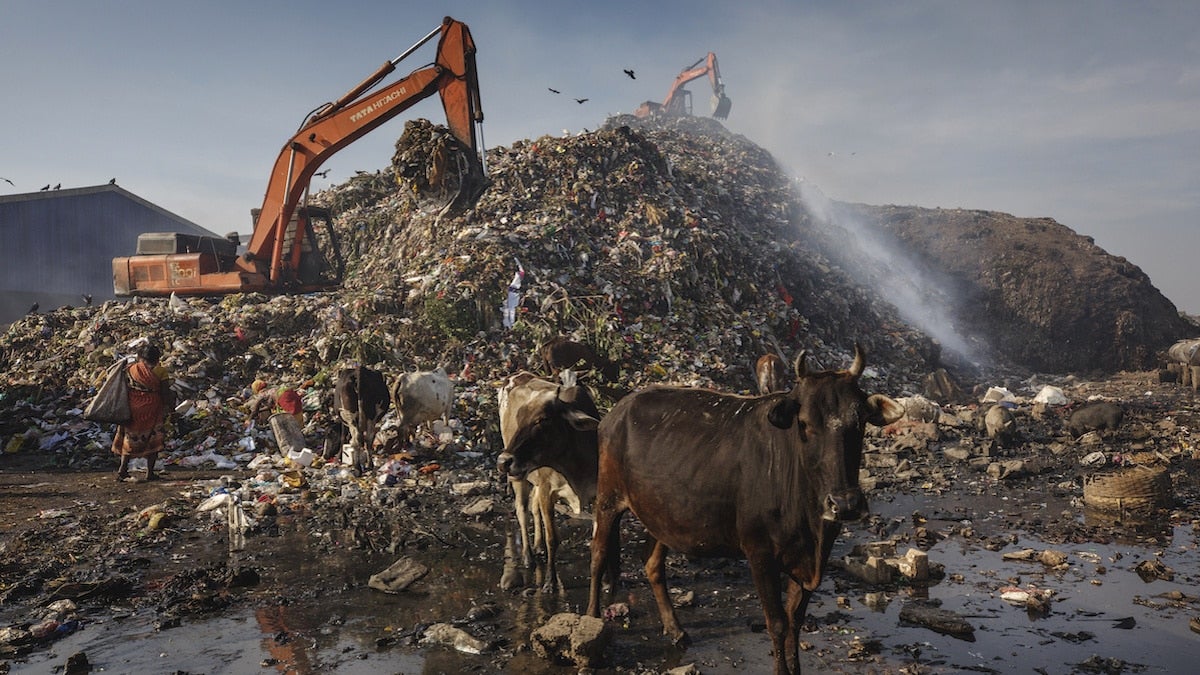 White thick smoke of methane gas seeps up between layers of garbage and waste at a dumping zone in Belgharia, India that has been leaking uncontrolled methane since 2008. Jonas Gratzer / LightRocket via Getty Images

Large methane leaks rose 32 percent in the first eight months of 2020, according to Paris-based data firm Karryos, as Reuters reported.

The rise in the harmful greenhouse gas is notable because it happened during worldwide lockdowns that led to drops in carbon emissions. It also happened despite pledges from the oil and gas sector to limit their carbon emissions.

Karryos, which analyzed satellite data to calculate the extent of methane emissions, says there are roughly 100 methane leaks happening around the world at any given moment.

“Such increases in methane emissions are concerning and in stark contradiction to the direction set in the Paris agreement,” said Antoine Rostand, president of Kayrros, as The Washington Post reported. “Despite much talk of climate action by energy industry stakeholders, global methane emissions continue to increase steeply.”

According to Karryos’ data, in some methane hotspots, emissions rose 40 percent higher than over the same time frame in 2019. Those areas were Algeria, Russia and Turkmenistan. In addition to those three countries, the U.S., Iraq and Iran were the three largest methane emitters in the first two-thirds of 2020, as The Washington Post reported.

Methane does not stick around the atmosphere as long as carbon dioxide, but it is a far more potent gas in the short term. In fact, according to Climate Change News, methane’s impact on the heating of the planet is 84 times higher than CO2 over its first 20 years.

The technology to reduce methane emissions in the oil and gas industry is already available. According to the International Energy Agency, if the industry used current technology, it could lower its methane emissions by three-fourths in the next decade, as Climate Change News reported.

Rostand said the largest leak that Karryos was able to detect was in Iraq, which released 400 tons per hour. The leak extended 150 miles into Saudi Arabia. In the U.S., the largest leak emitted 150 tons of methane per hour, which is equivalent to 10 coal-fired plants running at maximum capacity, as The Washington Post reported.

“We see from the sky, not on the ground, but what we are observing is the wrong trend. We should have expected decreases … but that has not been the case,” Rostand told the oil and gas news site Upstream.

Fixing methane gas leaks is expensive and requires significant equipment upgrades, which the industry has been slow to invest in as its profits have plummeted in 2020 due to decreasing demand.

The European Union has responded to the data and issued a new strategy Wednesday to address emissions from methane, as Climate Change News reported. The E.U. is the world’s largest importer of natural gas and has the potential to make a significant impact in the regulation of methane emissions.

“The Commission will examine options as regards possible methane emission reduction targets or standards or other incentives on fossil energy consumed and imported in the EU in the absence of significant commitments from international partners,” the strategy states.

So far, the binding targets for emissions reductions are still under consideration. They will need to be implemented and enforced for the E.U. to reach its climate targets and to achieve its stated goal of net zero emissions by 2050, according to Climate Change News.

According to the Clean Air Task Force, significant regulations from the E.U. could reduce methane emissions from the gas industry by 5 million tons per year, which is equivalent to shutting down nearly 120 coal-fired power plants, as The Washington Post reported.

“It is clearly time to reduce these emissions,” Rostand said Wednesday, according to The Washington Post. “They are easy to fix. We have the technology to fix them.” Without that investment, he said, “gas that leaks methane is as bad as coal.”

Correction: This article has been corrected to reflect that large methane leaks (more than 5 tons per hour) rose 32 percent, not total methane emissions.