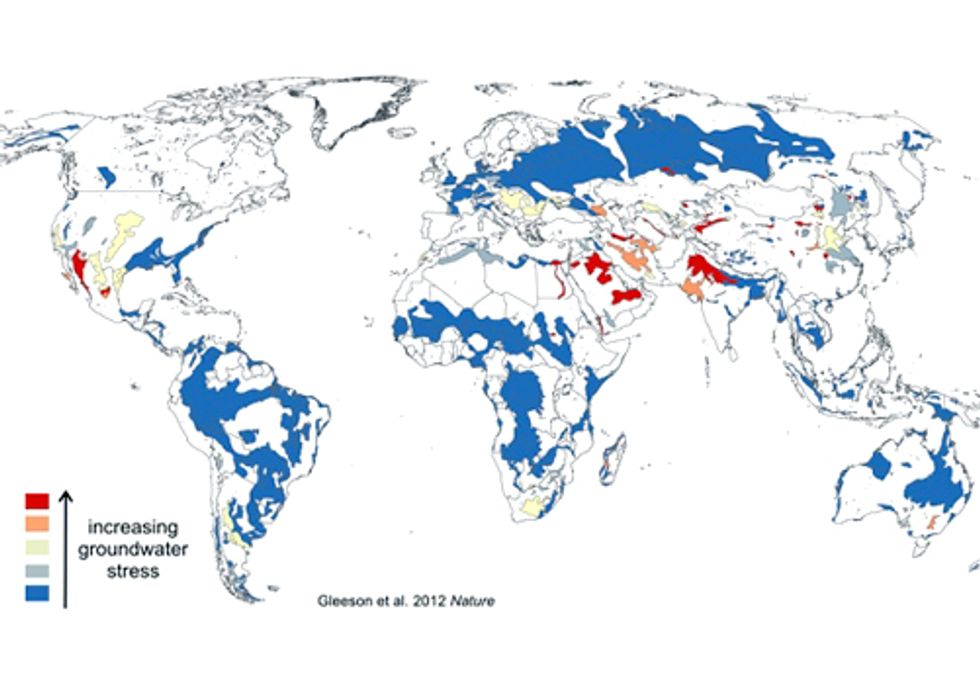 Degree to which aquifers important for farming are under stress. Gleeson, T. et al.

Almost one-quarter of the world’s population lives in regions where groundwater is being used up faster than it can be replenished, concludes a comprehensive global analysis of groundwater depletion, published this week in Nature.

Across the world, human civilizations depend largely on tapping vast reservoirs of water that have been stored for up to thousands of years in sand, clay and rock deep underground. These massive aquifers—which in some cases stretch across multiple states and country borders—provide water for drinking and crop irrigation, as well as to support ecosystems such as forests and fisheries.

Yet in most of the world’s major agricultural regions, including the Central Valley in California, the Nile delta region of Egypt and the Upper Ganges in India and Pakistan, demand exceeds these reservoirs' capacity for renewal.

“This overuse can lead to decreased groundwater availability for both drinking water and growing food,” says Tom Gleeson, a hydrogeologist at McGill University in Montreal, Quebec, and lead author of the study. Eventually, he adds, it “can lead to dried up streams and ecological impacts."

Gleeson and his colleagues combined a global hydrological model and a data set of groundwater use to estimate how much groundwater is being extracted by countries around the world. They also estimated each aquifer's rate of ‘recharge’—the speed at which groundwater is being replenished. Using this approach, the researchers were able to determine the groundwater ‘footprint’ for nearly 800 aquifers worldwide (see map above).

In calculating how much stress each source of groundwater is under, Gleeson and colleagues also looked in detail at the water flows needed to sustain the health of ecosystems such as grasses, trees and streams.

“To my knowledge, this is the first water-stress index that actually accounts for preserving the health of the environment,” says Jay Famiglietti, a hydrologist at the University of California, Irvine, who was not involved in the study. “That’s a critical step.”

The authors found that 20 percent of the world’s aquifers are being overexploited, some massively so. For example, the groundwater footprint for the Upper Ganges aquifer is more than 50 times the size of its aquifer, “so the rate of extraction is quite unsustainable there," says Gleeson.

Yet Famiglietti notes that the study, which focuses on quantifying the rate of groundwater tapping versus recharging, underscores the lack of data we have on the amount of water currently in the world's aquifers. “The only way to answer the sustainability question is to answer how much water we actually have,” he says.

He predicts that a comprehensive picture would reveal that many more of the world’s aquifers are being tapped unsustainably. As certain regions face more frequent droughts and population growth, full characterization of aquifers worldwide, although expensive, will be necessary, adds Famiglietti.

But Gleeson adds that there is at least one significant source of hope. As much as 99 percent of the fresh, unfrozen water on the planet is groundwater. “It’s this huge reservoir that we have the potential to manage sustainably,” he says. “If we choose to.”