Global Frackdown on Saturday Calls for Worldwide Ban on Fracking 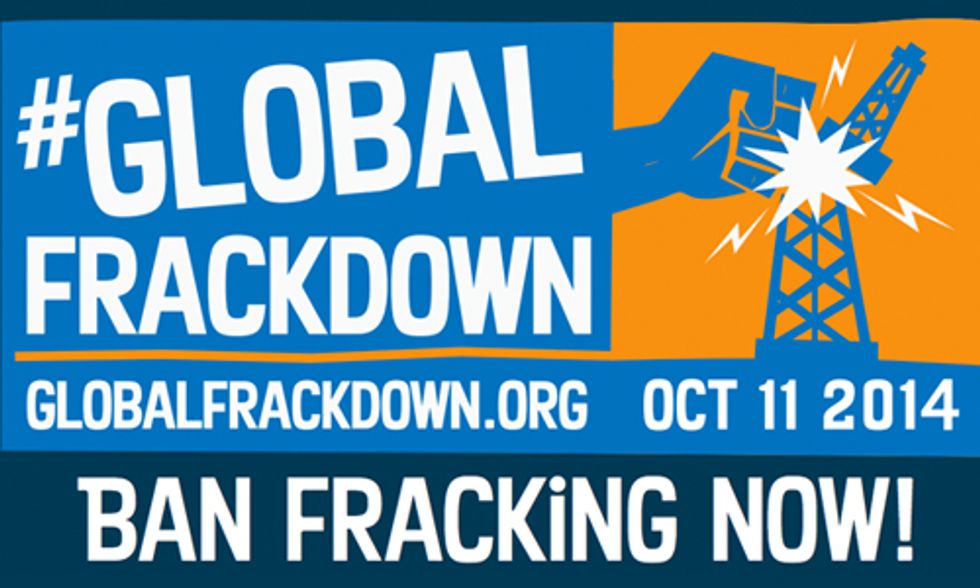 Global Frackdown is an international day of action calling for a ban on fracking. This year's event on Saturday, Oct. 11 will send a message to elected officials across the globe that the future should be powered by clean, renewable energy, not dirty, polluting fossil fuels.

Climate scientists warn that continued extraction and burning of fossil fuels will lead to catastrophic climate change. A report released in September by Food & Water Watch, The Urgent Case for a Ban on Fracking, shows how huge amounts of methane are released during the fracking process, which traps 87 times more heat pound for pound than carbon dioxide over a 20-year period.

Participants in Global Frackdown will organize events in their communities united around a common mission statement that calls for a ban on fracking and investment in renewable energy.

Fracking for oil and gas is inherently unsafe and the harms of this industry cannot be fully mitigated by regulation. We reject the multi-million dollar public relations campaign by big oil and gas companies and urge our local, state and national officials to reject fracking. We stand united as a global movement in calling on governmental officials at all levels to pursue a renewable energy future and not allow fracking or any of the associated infrastructure in our communities or any communities. We are communities fighting fracking, frac-sand mining, pipelines, compressor stations, LNG terminals, exports of natural gas, coal seam gas, coal bed methane and more. Fracking is not part of our vision for a clean energy future and should be banned.