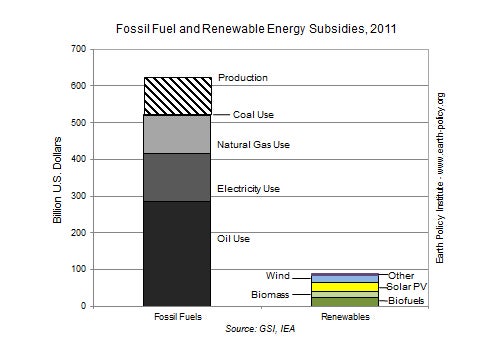 The energy game is rigged in favor of fossil fuels because we omit the environmental and health costs of burning coal, oil and natural gas from their prices. Subsidies manipulate the game even further. According to conservative estimates from the Global Subsidies Initiative and the International Energy Agency (IEA), governments around the world spent more than $620 billion to subsidize fossil fuel energy in 2011: some $100 billion for production and $523 billion for consumption. This was 20 percent higher than in 2010, largely because of higher world oil prices.

Of the $523 billion that supported consumption, $285 billion went to oil, $104 billion to natural gas and $3 billion to coal; an additional $131 billion was divided among the three energy sources specifically for electricity use. Through these subsidies, governments cut the prices people paid for fossil energy by nearly a quarter—encouraging waste and hindering efforts to stabilize climate.

Iran spent the most of any country to subsidize the use of fossil fuels: $82 billion, equal to 17 percent of the country’s gross domestic product. Half of that money went to oil. With domestic automotive fuel prices held far below world market prices, Tehran is snarled in seemingly endless traffic congestion and choked with air pollution. The world’s two leading energy exporters had the second and third highest subsidies: Saudi Arabia spent $61 billion, mostly for oil use, and Russia spent $40 billion, split almost evenly between natural gas and electricity use. India spent just under $40 billion, nearly 80 percent more than in 2010. China’s $31 billion, mostly for oil, rounded out the top five.

On a per person basis, Middle Eastern countries top the list. The United Arab Emirates spent a whopping $4,200 per person on fossil fuels consumption in 2011. Kuwait and Qatar each doled out more than $3,600 per person. Each of these countries ranks high on another disreputable list: the world’s top carbon emitters per capita.

In 2009, the G-20 countries committed to gradually eliminating “inefficient fossil fuel subsidies that encourage wasteful consumption,” but they have made little measurable progress. Rising world oil prices have strained the budgets of governments that heavily subsidize gasoline and diesel use, leading a number of countries, including Morocco and Mexico, to reduce their support. In December 2010, Iran instituted a five-year program to reduce subsidies, which began by nearly quadrupling gasoline prices overnight. Without such reforms, Iran would have had even higher subsidies in 2011.

The estimated $623 billion spent to subsidize fossil fuels does not capture the full extent of support, such as certain tax breaks and years of government-funded research and infrastructure dedicated to the older, dirtier sources. In contrast, just $88 billion went to subsidies for renewable energy, most often paid to the producer. This support was almost equally divided among solar photovoltaics, wind, biomass electricity and biofuels (ethanol and biodiesel). Clearly, the deck is stacked against renewables.

The IEA estimates that phasing out all fossil fuel consumption subsidies by 2020 would cut carbon dioxide emissions in that year by nearly 2 gigatons, the equivalent of taking 350 million cars off the roads. The fossil fuel industry does not need billions of dollars in government support; in 2012, the Big Five oil companies—Royal Dutch Shell, ExxonMobil, BP, Chevron and ConocoPhillips—together raked in $137 billion in profits. Shifting subsidies from the dirty fuels of the last century to clean renewable sources, such as wind, solar and geothermal, will help speed the transition to a new and lasting energy economy.

Visit EcoWatch’s ENERGY and RENEWABLES page for more related news on this topic.