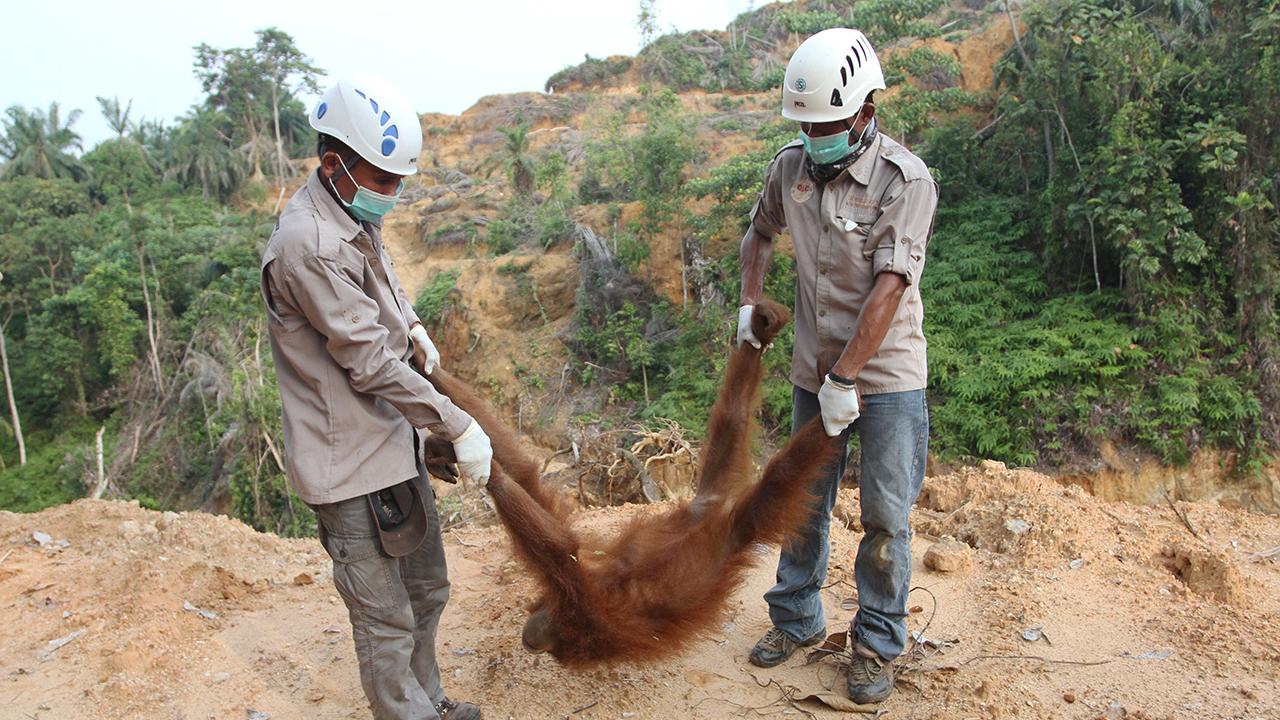 Officers from the Sumatran Orangutan Foundation Lestari and the Orangutan Information Centre evacuate eight-year-old, female Sumatran orangutan trapped in the oil palm plantations on Sept. 1, 2015 in Langkat Regency, North Sumatra, Indonesia. More than a third of large-scale oil palm expansion between 1990 and 2010 resulted in direct forest loss (about 3.5 million hectares in total) in Indonesia, Malaysia and Papua New Guinea, according to the Roundtable on Sustainable Palm Oil. Clearing rain forests for oil palm plantations has destroyed critical habitat for endangered species like rhinos, elephants, tigers and Orangutan, which have all been pushed to the verge of extinction. Sijori Images / Barcroft India / Getty Images

The way food is grown around the world threatens 24,000 of the 28,000 species that are at risk of extinction, according to a report published Wednesday that calls on world leaders to urgently reform the global food system.

Plants and animals are dying out at a rate that is at least tens — if not hundreds — of times faster than the average over the past 10 million years, according to the report, which was published by the United Nations Environment Program (UNEP), British think tank Chatham House, and animal welfare organization Compassion in World Farming. The decline has mostly been driven by people destroying natural ecosystems to make space for cropland and pastures.

But world leaders could slow the accelerating loss of the planet’s wildlife with simple steps: protecting more land, farming with fewer pesticides and monocultures, and shifting diets from meat towards plants. The scope of the first two solutions, the authors warned, depends on how much people change their diets and stop throwing food away.

“If our demand for food continues to increase, the more intensively we have to use the land that is left,” said Tim Benton, an ecologist at the think tank Chatham House and co-author of the report. “It is about changing the way that we relate to food.”

The food system sits at the heart of four worsening global crises: climate, extinction, hunger and obesity. With more than a third of the world’s land used for agriculture, experts are grappling with how to feed a growing population more food that is healthy — while at the same time killing less wildlife and emitting fewer greenhouse gases.

For decades, environmental activists have held up organic farms, which avoid synthetic fertilizers and pesticides, as a nature-friendly alternative to conventional agriculture. Some farmers have turned to regenerative practices that store carbon dioxide in soils and make crops more resilient to storms and droughts.

But ecologists say there is a catch.

Because organic and regenerative farms typically yield less food per hectare than industrial farms, sustainable farmers need to use more land if they are to grow the same amount of food.

A 2019 study published in the journal Nature Communications found that adopting organic farming across the UK would, in fact, lead to more greenhouse gas emissions. Lower yields at home would be offset by imported food from croplands that would expand onto natural ecosystems.

In the US, a detailed lifecycle assessment of a regenerative farm found that its greenhouse gas emissions for each kilogram of meat were 66% lower than conventional alternatives, but took up 2.5 times more land, according to a study published in December in the journal Frontiers in Sustainable Food Systems.

Experts say there isn’t enough land to feed the world and its growing appetite for meat through sustainable farms alone, even if they were built on marginal lands like degraded cropland.

The only thing that will allow us to farm in a sustainable way is changing our demand for food, said Benton. “That sounds horribly elitist, middle-class, ‘let’s all go vegan’,” he said. But it could free up demand for land that could then be satisfied by sustainable farms.

Beef and a few other red meats, for instance, supply 1% of the world’s calories but account for 25% of the emissions that come with changing how land is used, according to a study published in the journal Nature in January. To produce the same amount of protein as tofu, beef uses up 75 more times land.

In countries like Brazil and Indonesia, foreign demand for commodities drives companies to raze rainforests to grow soy for cattle and oil palm for cooking and use in processed foods.

In many cases, the food is not even eaten. About a third of all food made is lost during production or wasted.

The charge sheet ecologists have against industrial agriculture is long: destroying forest homes of endangered mammals like orangutans; killing bees that farmers rely on to pollinate crops; chopping trees that suck CO2 out of the atmosphere; and degrading soils that future generations will need to feed themselves.

But doctors, too, are worried.

Expanding farmlands raises the risk of zoonotic diseases crossing from animals to humans. Factory farms pump antibiotics into livestock that encourages the growth of bacteria that are resistant to treatment. And then there’s nutrition.

Obesity rates have tripled in the last half century amid a rise in foods high in fat and sugars and a fall in physical activity, bringing greater risk of heart disease and some cancers. The World Health Organization has called on the food industry to reduce the fat, sugar and salt content of processed foods, and make sure that healthy choices are affordable to everybody.

“Our current food system is a double-edged sword shaped by decades of the cheaper food paradigm,” said Susan Gardner, Director of UNEP’s Ecosystems Division. It aims to make more food, quickly and cheaply, without considering the costs to biodiversity and health, she said.

But at the same time, cheap food prices and productivity increases in agriculture have given more people access to food, said Irene Hoffman, Secretary of the Commission on Genetic Resources for Food and Agriculture at the UN’s Food and Agriculture Organization (FAO), who was not involved in the report. “Otherwise, our current food insecurity index would be much, much higher.”

The world population has doubled in the last 50 years to 7.8 billion people. While food production has kept up, 1 in 10 people today still go to bed hungry each night. By 2050, when the population is expected to reach nearly 10 billion people, the competition for land will be even greater because of efforts to grow plants to remove carbon dioxide from the atmosphere.

A landmark study published in the medical journal Lancet in 2019 found that world leaders could feed 10 billion people and still stay within a “safe operating space on Earth” by radically changing food production and shifting diets.

And doing so, the authors found, would make people healthier.

A move to healthy, sustainable diets would involve eating half as much red meat and sugar globally, and twice as many nuts, fruits, vegetables and legumes. It would avoid more than 7 million premature deaths per year, as well as reducing pressure on nature.

This, in turn, this would also make the farms more resilient to shocks like climate change, disease and soil erosion, safeguarding food supplies for the future.

“There’s often a tendency to play nature against agriculture, which is absolutely not the case,” said Hoffmann. “Agriculture depends on biodiversity, it is shaped by biodiversity [and] it manages biodiversity.”