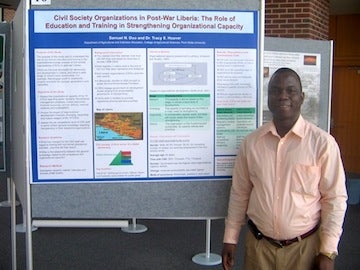 Over the past decade, the program enabled a total of 4,314 emerging social justice leaders from Asia, Russia, Africa, the Middle East, and Latin America to pursue advanced degrees at more than 600 universities in almost 50 countries. Many Ford International Fellows have become leaders in the fields of environmental leadership, protection, and research. Over the next several weeks, Ecowatch will be profiling some of these incredible graduates, sharing their stories and global environmental impact. 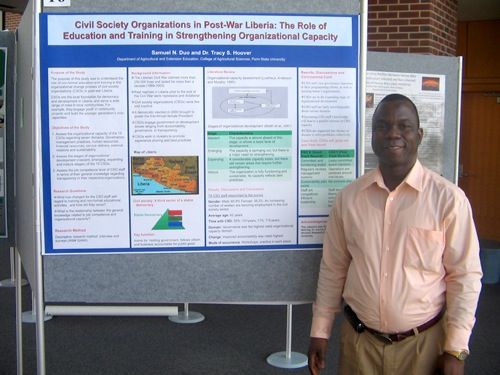 Samuel Duo, like many Liberians in the 1990s, was forced to flee his home country and seek refuge in Ghana to escape the terrors of the First Liberian Civil War. The civil war displaced over a million Liberians like Duo into refugee camps in neighboring countries. Entire villages were emptied as people fled. The war destroyed a once-viable economic infrastructure, and spread to Liberia’s neighbors, destabilizing a region that already was one of the world’s most marginal. To make matters worse, the war severely damaged the nation’s agricultural sector. Productivity plummeted, especially as people fled their homes, and agricultural value chains were left under-developed.

Duo was determined to return to Liberia and help solve the many problems that were left in the wake of the civil war. During his time in Ghana, he worked to develop his leadership skills and involved himself heavily in the burgeoning community of refugees. Yet amidst the turmoil and poverty that permeated the entire region, he struggled to find ways to put his talent and passion to use.

All of that changed when Duo was selected to be a Ford IFP fellow. He traveled to the U.S. where he completed a master’s degree in Agriculture at Penn State University. Duo showed such promise throughout his studies that Penn State offered him a doctoral award to pursue a PhD in Agricultural and Extension Education, with an emphasis on Leadership Development.

When Duo completed his PhD in May, 2011, he returned to Liberia, where the state of the economy was abysmal. Most businessmen had fled the country and few enterprises were intrepid enough to do business with the struggling country. Liberia could not produce the food it needed to feed its population, and relied heavily on expensive imports, leaving the country exceedingly vulnerable to high food prices and fluctuations in the global market. Monrovia, the nation’s capital, was the hardest hit of any during the civil war, with its business infrastructure all but destroyed.

Duo applied his new knowledge and professional networks to help establish the Liberia branch of the Social Enterprise Development (SEND) Foundation of West Africa through the assistance of SEND West Africa CEO Siapha Kamara, whom Duo considers his mentor. During this period, Duo secured United Nations Development funding for capacity development and project management in communities, with the goal of helping Liberians drive their own development agenda.

Envisioning Liberia as a country where people’s rights and well-being are guaranteed, SEND’s mission is to promote good governance and the equality of men and women by approaching development issues holistically. For example, Liberian citizens will not make rational and informed decisions or be civically-engaged when they are unable to sustain a basic livelihood for their families. With women constituting a majority of the labor force in the subsistence agriculture sector, SEND provides micro-finance with reproductive health education support to more than a thousand women in the Nimba, Bong and Lofa Counties. This support has helped many of them keep their children in school and provide food for their family.

Duo oversaw SEND-Liberia as they worked on developing a local civil society organization. The SEND management team targeted their efforts specifically to poor, rural communities and sought out women to lead the charge in creating new economic opportunities. Duo led many of these communities in initiating the production of soybeans, an important environmental cash crop in regions where people cannot afford to buy fish and meat to balance their diets.

He also trained district development committee (DDC) members in Nimba County in project cycle management, community action planning, gender analysis and rural appraisals. Totaling fourteen people, the DCC members are comprised of youth representatives, women and community elders who have been selected to help identify and drive their district development agendas. The Liberian government considers the committee as paramount in decentralizing development efforts.
Recently, Duo joined the faculty at the College of Agriculture and Forestry at University of Liberia, where he focuses on youth development and civic engagement in Liberian society at large. He also works to train graduates and help them find research-related jobs that enable them to build their own capacities for development through the Center for Applied Research and Training, where he serves as chairman of the board.

As a leadership development specialist, Duo is engaged in a multi-faceted approach to addressing crucial social issues in his home country, where he believes that women and young people are the key to a more promising future. “My study with IFP was transformative,” he says of the impact of his Ford fellowship. “That learning experience greatly informs the work I do today.”