IEA: China and India to Fuel Further Rise in Global Coal Demand in 2018 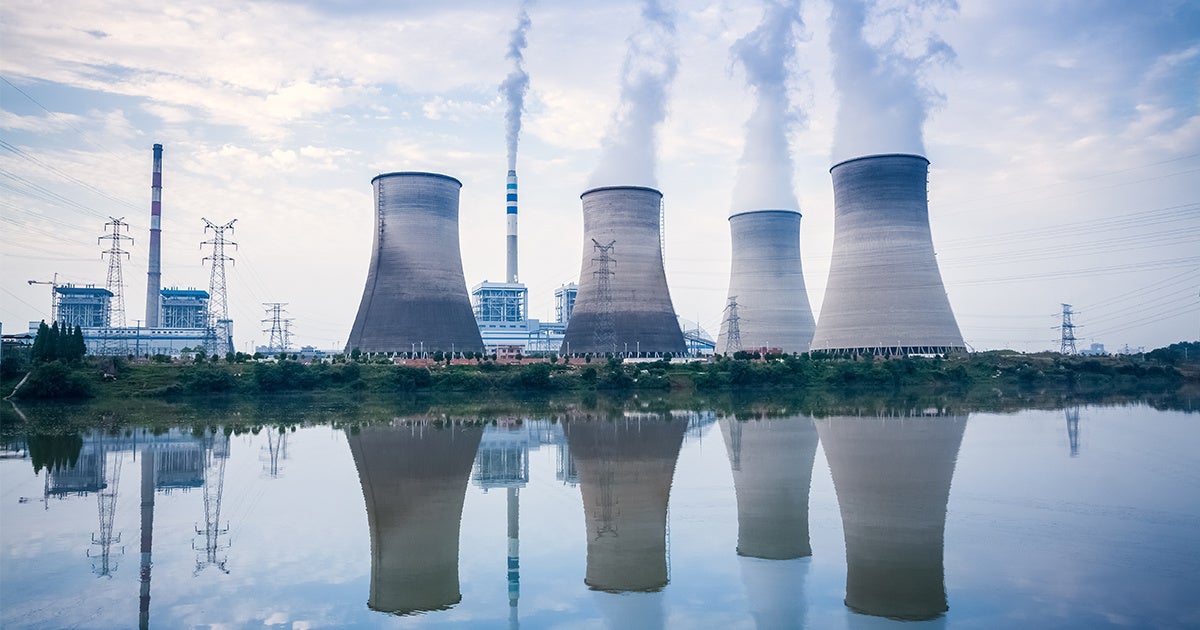 The IEA’s Coal 2018 report finds that global coal demand grew by 1 percent in 2017 after two years of decline. The rise was chiefly driven by global economic growth, it says. Despite recent growth, demand is still below “peak” levels seen in 2014.

Demand is likely to “remain stable” until 2023, the report authors say. This is because falling demand in western Europe and North America is likely to be offset by increased demand in a host of Asian countries, including India, Indonesia and Vietnam.

Each year, the IEA publishes a series of six-year forecasts for key energy markets. For example, the Coal 2018 report looks at the market for the fossil fuel out to 2023, broken down by country and sector.

This year’s report leads with the news that global coal demand returned to growth in 2017 after two years of decline. It is likely that demand will continue to grow in 2018, said Keisuke Sadamori, director of energy markets and security at the IEA. He told a press briefing:

“The global coal demand declined in 2015 and 2016. In 2017, it rebounded, and our estimates suggest it will grow in 2018 too. However, this is very different to the growth we saw earlier in the decade.”

In other words, global coal demand is growing, but is still below “peak” levels seen in 2014. Actual demand is shown in red on the chart below, with each year’s IEA forecast shown in shades of blue. (Note that the y-axis does not start at zero.) 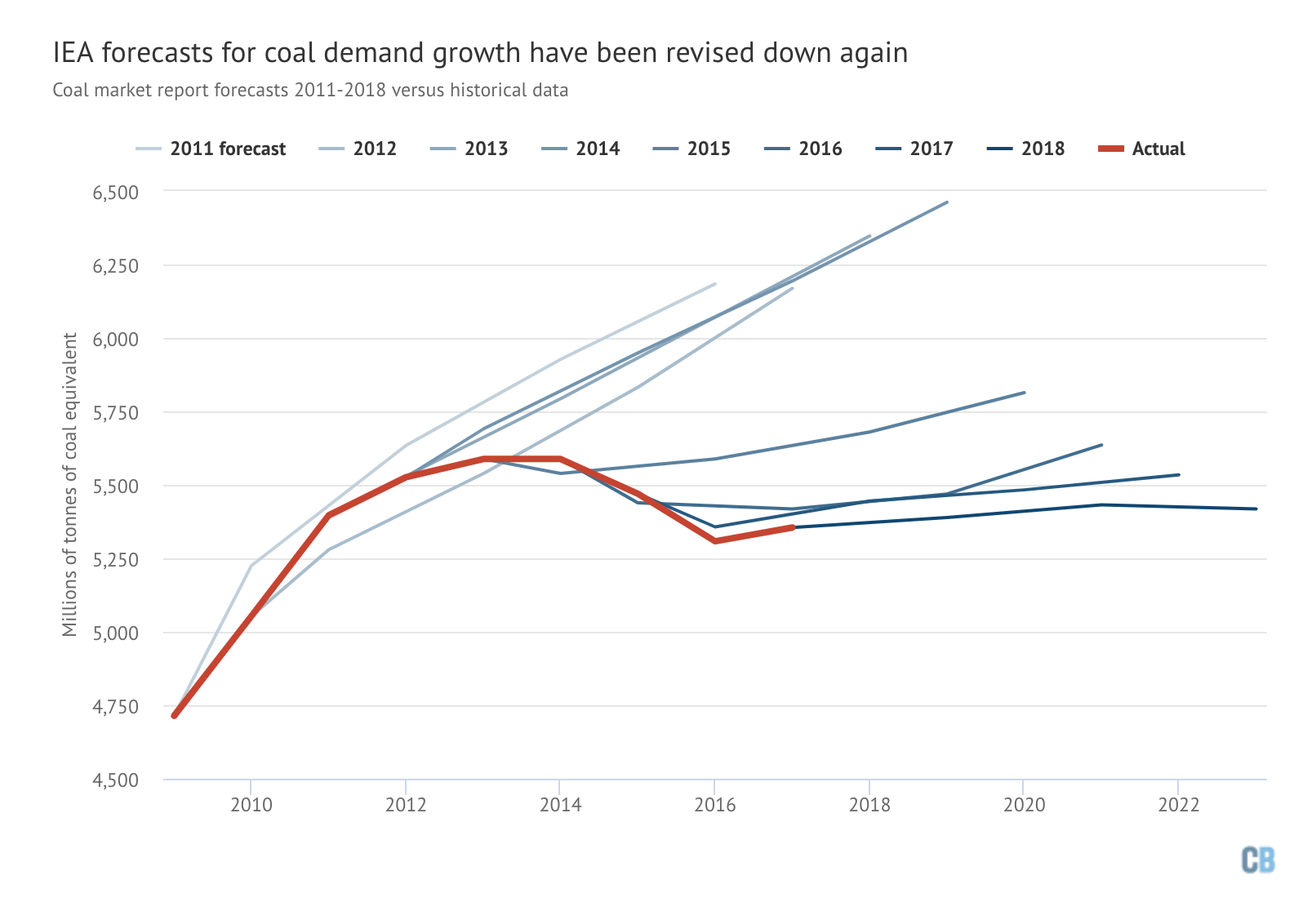 The further expected increase to demand in 2018 is thought to be “driven by strong coal power generation in China and India,” the report says.

The chart also shows how, in 2016, global coal demand fell to a level lower than expected by the IEA’s projections.

This year’s six-year forecast is the first to project a small decline in global coal demand by 2021—suggesting IEA is moving away from forecasting ongoing growth in demand.

The change in forecast reflects the fact that “we are in a different world” to when the IEA made its first coal projections in 2011, said Carlos Fernández Alvarez, a senior energy analyst at the IEA. He told Carbon Brief:

“In 2011, the big question about coal was when Chinese coal consumption would peak. Given the sheer size of China and of Chinese growth, this meant that the world’s coal consumption would also grow. Now, we are in a different world. Not only owing to changes in China, but many other things have happened in the meantime, such as the shale revolution, the renewable costs decline and the Paris Agreement—so our forecast has also changed.”

The projected plateau and slow decline of global demand in the coming years is partly the result of efforts to move away from coal in western Europe and North America, the authors say.

The map below, which is taken from page 89 of the report, gives an idea of how coal phase-out plans currently look across Europe. 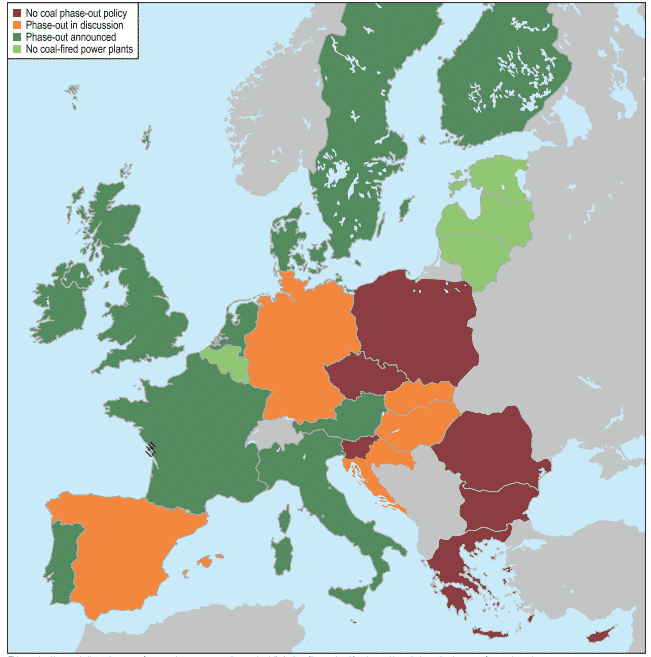 The map paints a picture of “two Europes,” the report says. In western Europe, specific policies for a coal phase out combined with action on climate change, including through the EU Emissions Trading System, is likely to hit coal demand hard, the report says:

“By 2023, at least two more countries, France and Sweden, will have closed their last coal power plants, and Germany will be the only significant coal consumer remaining in western Europe.”

However, in eastern Europe—where coal demand remains level—most countries have not announced phase-out policies, the report says, and new coal power plants are under construction in the Balkans, Greece and Poland.

The report projects that, in the EU, coal demand will drop 2.5 percent per year, from 325m tonnes of coal equivalent (mtce) in 2017 to 280 mtce in 2023. (Coal equivalent is a standardized measure of the energy obtained from burning coal.)

By this point, it will have taken 30 years for coal consumption to drop by half, the report notes, “indicating the resiliency of coal as an energy resource.”

Looking across the whole of Europe, however, brings a different forecast. Coal demand is expected to fall at a rate of 1.3 percent—owing to demand remaining stable in eastern Europe and potentially increasing in Turkey, the report says.

In the U.S., coal demand dropped by 2.6 percent to 641m tonnes in 2017. However, this decline is less rapid than in the last two years, likely reflecting a slow-down in the closure of coal power stations, the report says. Coal retirements have returned to near-record levels in 2018.

In China, the world’s largest coal producer, demand rose by 10m tonnes to 3,664m tonnes in 2017, following three years of decline. This rise was largely fueled by an increase in coal-fired power generation, the report says.

However, the IEA projects a decline in coal demand to 2,673 mtce by 2023. This is owed to expected declines of coal consumption by key industries, such as steel.

Another expected driver of falling demand in China is the country’s “Blue Sky” policy—an action plan for cutting air pollution across large cities. The policy has seen several cities, including Beijing, introduce bans on residents burning coal for heat. The report says:

“Environmental policies, and in particular clean-air measures, constrain coal demand. The main target of the policy action is to reduce direct coal use and small boilers in residential heating, as well as in the commercial and industrial sectors. Cement, steel and small power producers are also targeted in China’s air-quality campaign.”

These measures, along with China’s commitment to investing in renewable energy and energy efficiency, led the IEA to project an overall decline in demand in China—despite the growth seen in 2017. The report says:

“Considering all these moving pieces, we maintain the forecast in last year’s report that China’s coal demand has entered a slow but structural decline at less than 1% per year on average.”

The world’s greatest percentage increase in coal power demand (5.4 percent) is expected to occur in Southeast Asia—where demand is projected to rise from 186 mtce in 2017 to 259 mtce in 2023.

Demand growth is expected to be highest in Indonesia, Vietnam, Malaysia and the Philippines, the report says:

“Although these countries differ considerably in energy resource endowment, they share robust economic growth, a rising population and an expanding middle class, all of which boost power demand. As coal-based power is expected to cover a significant share of the additional demand … considerable new coal-fired capacity is set to come online in these four countries.”

In India, demand is expected to rise from 563 mtce in 2017 to 708 mtce in 2023. The chief driver of this demand is a growing desire for coal-fired power, fueled by ongoing infrastructure development and the expansion of the country’s middle class, the report says.

Coal demand in India is also expected to grow as a result of expansion in key industries, such as cement and sponge iron production. By 2023, India’s non-power coal consumption is expected to rise by 33 mtce to 163 mtce.

The IEA expects the proportion of electricity from renewable sources to double to 25 percent of the total power mix by 2023. The Indian government is aiming to install 100 gigawatts (GW) of solar by 2022 and 50GW of wind—double the wind capacity of 2017 and four times the solar capacity. The report says:

“The large-scale ongoing renewable expansion and the use of supercritical technology in new coal power plants will slow coal demand growth, which will grow by less than 4% per year through 2023, compared to over 6% on average per year in the past decade.”

In addition to growing more slowly than in the recent past, India’s coal demand has fallen short of earlier IEA forecasts. This year, the IEA has once again cut its forecast for coal demand growth in India.