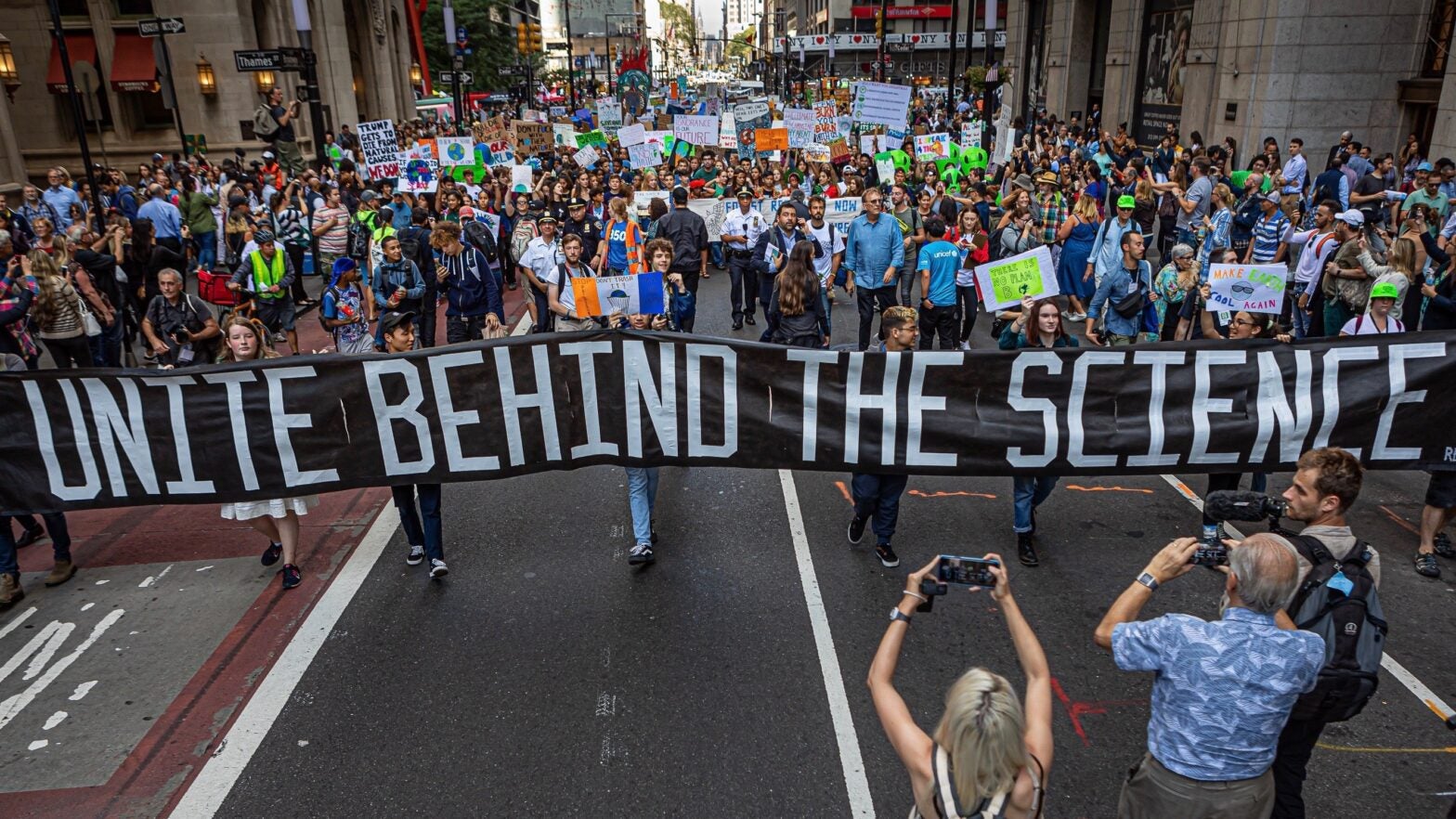 An estimated 250,000 marched in NYC as part of a global strike on Sept. 20. Michael Nigro / Pacific Press / LightRocket / Getty Images

More than 7.6 million people worldwide participated in the global climate strike between Sept. 20 and 27, according to the current tally reported by 350.org. That number could grow as counting continues, but the week of strikes is confirmed as one of the largest global protests in history. For comparison, the massive 2003 protest against the Iraq War drew between six and 11 million.

“This week was a demonstration of the power of our movement. People power is more powerful than the people in power. It was the biggest ever climate mobilization, and it’s only the beginning. The momentum is on our side and we are not going anywhere,” Fridays For Future International said.

Early numbers confirm at least
7 million people joined the #weekforfuture climate strikes! Thank you everyone, especially the local organisers! The #weekforfuture is one of the biggest global demonstrations in history. This is just the beginning! #climatestrike #fridaysforfuture pic.twitter.com/CDPZ2C2hjd

Four million people participated in the first round of strikes on Friday, Sept. 20, making it the largest climate mobilization in history. But that number grew with strikes on Sept. 27. Large turnouts on the 27th were reported in New Zealand, Italy, Spain, the Netherlands and Canada, according to The Guardian and BBC News.

The day began in New Zealand, where more than 3.5 percent of the country participated, The Guardian reported. Demonstrators delivered a letter signed by 11,000 people to the country’s parliament asking it to declare a climate emergency, according to another Guardian report.

“Our representatives need to show us meaningful and immediate action that safeguards our futures on this planet,” School Strike 4 Climate national coordinator Raven Maeder said, as The Guardian reported. “Nothing else will matter if we cannot look after the Earth for current and future generations. This is our home.”

Organizers counted 170,000 people through a combination of speaking to people on the ground, talking to councils and police and viewing drone footage, New Zealand’s Stuff reported. It’s a number of historic proportions, Stuff explained:

If accurate, it takes the lead as one of New Zealand’s biggest strikes (in terms of attendees) – beating out the 1951 industrial confrontation that saw 22,000 wharfies join the picket line for 151 days from February to July, as well as this year’s mega teachers’ strike, but not quite the 1979 general strike which saw almost 300,000 workers nationwide join the picket line for one day.

In Italy, meanwhile, more than one million people participated, according to ANSA.

Swedish 16-year-old Greta Thunberg, who has been instrumental in launching the school strike movement, marched in Montreal with half a million others, BBC News reported.

“It is very moving to see everyone, everyone who is so passionate to march and strike,” she told reporters. “It is a very good day, I would say.”

It’s official. 500,000 people came out into the streets of Montreal today to join the Global #ClimateStrike

They’re part of the 6.6 million who took part all over the world. The momentum is on our side and we are not going anywhere. #FridaysForFuture pic.twitter.com/vfQfU3LqZn

In total, 800,000 people participated all over Canada, according to 350.org. Canada’s climate strikers are calling for an end to new fossil fuel infrastructure and subsidies, BBC News reported. That means cancelling the Trans Mountain Pipeline expansion, which has the support of both Canada’s Liberal and Conservative political parties. Strikers also want the country to commit to reducing emissions by 75 percent of 2005 levels by 2030.

The organizers behind the global climate strikes now intend to build on the past week’s success. The next UN Climate Summit will take place in Chile in December, and organizers there say they will continue fighting until governments take meaningful action to reduce emissions and phase out fossil fuels.

“Today in Chile we marched from Arica to Punta Arenas, where people of all ages, organizations and institutions gave their voice, a voice that bravely rises to ask politicians of the world for no more double speeches and more actions that seek the ‘good living’, or as they say in my community, the küme mongen,” Fridays for Future Chile organizer Joel Enrique Panichine, who identifies as a member of the Mapuche people, told 350.org.