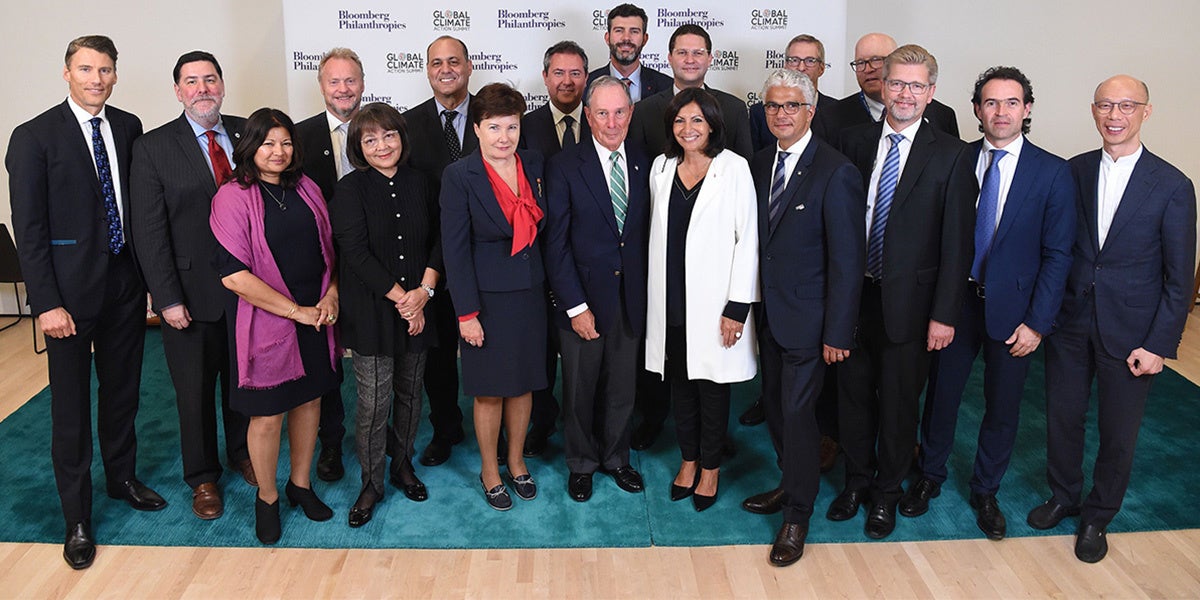 Over the past three days, more than 4,000 people have gathered in San Francisco for the Global Climate Action Summit (GCAS) convened by California Governor Jerry Brown to mobilize regional, local and business leaders around climate change.

Seventeen states and 400 cities, representing together the world’s third largest economy, have now joined Brown and summit co-chair and UN special envoy for climate action Michael Bloomberg’s “We’re Still In” commitment to honor the terms of the Paris agreement despite President Donald Trump‘s decision to withdraw, and Bloomberg announced at the summit Thursday that the group was making progress, The Nation reported.

“Today, we announce that this ‘bottom up’ movement will put us within striking distance of the US commitment to the Paris Agreement, even with zero support from our federal government,” Bloomberg said, according to The Nation.

That announcement was based on a report written by researchers at the University of Maryland and the Rocky Mountain Institute that found that business, regional and local efforts have taken the U.S. nearly halfway towards meeting its 2025 Paris goal and will carry it two-thirds of the way by 2025 without federal support, according to a GCAS press release.

But that was only one of the many announcements made by cities, states and businesses as they celebrated their progress and reaffirmed their commitment to fighting climate change.

Here is a roundup of some of the highlights.

Scientists have warned that global greenhouse gas emissions need to peak in 2020 and then rapidly decline in order to avoid catastrophic warming.

Luckily, on Thursday, Paris mayor and chair of the C40 network of cities committed to climate action Anne Hidalgo announced that 27 major cities, representing 54 million people, had already passed this milestone, according to a GCAS press release.

“It is an incredible achievement for these 27 cities, including Paris, to have peaked their emissions,” Hidalgo said. “As the greatest custodians of the Paris Agreement, mayors of the world’s great cities have once again shown that cities are getting the job done.”

2. NYC Puts Its Money Where Its Mouth Is

It is not enough for cities to rest on past accomplishments.

Ahead of the summit, de Blasio had joined with London Mayor Sadiq Khan to call on other cities to divest from fossil fuels and invest in solutions like renewable energy.

De Blasio was joined in his announcement by Comptroller Scott Stringer and other fund trustees.

“New York City leads from the front when it comes to the fight against climate change,” de Blasio said. “We’re taking a stand for generations to come with our goal to double our pension investments in job-creating climate solutions. I know that other cities will look to our example, and I implore them to join us.”

The Pacific Coast Collaborative (PCC), representing the states of California, Oregon, Washington, the Canadian province of British Columbia and the cities of Los Angeles, Oakland San Francisco, Portland, Seattle and Vancouver, renewed its commitment to working together against climate change and towards a growing renewable energy economy.

“The West Coast represents the world’s fifth largest economy and we are creating a blueprint for other regions,” Washington Governor Jay Inslee said. “We are building a thriving, innovative economy that combats climate change and embraces a zero-emission future. Our efforts aren’t just building a clean energy economy, they’re also creating great places to live. Our communities are growing healthier and more prosperous, and attractive to new businesses and workers.”

Business leaders made commitments as well, including ChargePoint, one of the world’s largest networks of electric vehicle chargers, according to Reuters.

The company announced a pledge to add 2.5 million charging points to its network within the next seven years on Friday, according to a press release emailed to EcoWatch.

The commitment represents a nearly fifty-fold expansion of its charging network, would prevent two million tons of greenhouse gas emissions from entering the atmosphere and would help establish infrastructure for a future in which EVs are expected to represent more than 50 percent of new car purchases by 2040.

ChargePoint President and CEO Pasquale Romano said in a press conference that the company had done the math, and the commitment meant the company was “going to grow in line with the adoption rate of EVS.”

The commitment actually only covers a “subset” of ChargePoint’s business, Romano said.

ChargePoint has developed a business model of going from business to business and installing chargers in company parking lots, and this is the network it is committed to expanding.

Its home and transportation fleet charging efforts are not included and will represent additional greenhouse gas savings.

Romano said that policy decisions by individual governments, such as Trump’s reversal of Obama-era fuel efficiency standards, could be “speed bumps” in the growth of EVs, but policies already established in California and the EU, as well as the quality and falling price of EVs, meant that their use would continue to expand.

“In the long term, this is an unstoppable train,” he said.