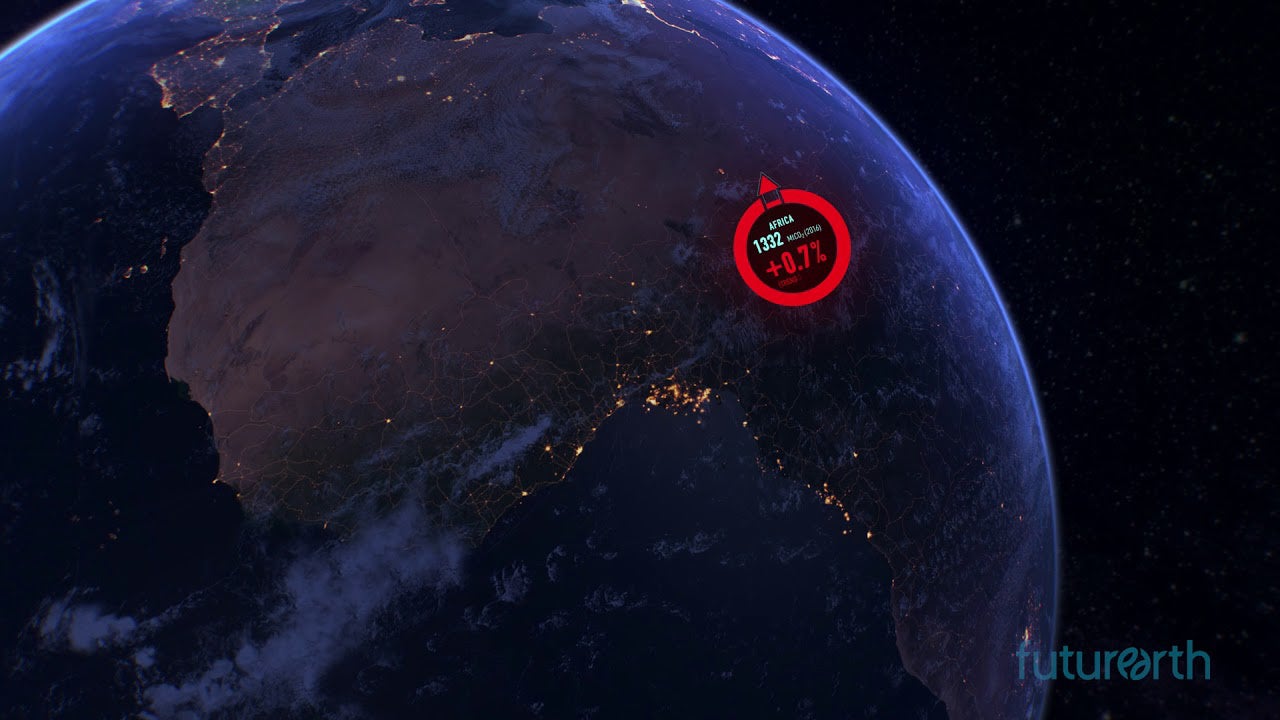 Over the past three years, global CO2 emissions from fossil fuels have remained relatively flat. However, early estimates from the Global Carbon Project (GCP) using preliminary data suggest that this is likely to change in 2017 with global emissions set to grow by around two percent, albeit with some uncertainties.

The GCP is a group of international researchers who assess both sources and sinks of carbon. It has published an annual global carbon budget report since 2006. Its newly released global carbon budget for 2017 provides estimates of emissions by country, global emissions from land-use changes, atmospheric accumulation of CO2, and absorption of carbon from the atmosphere by the land and oceans. 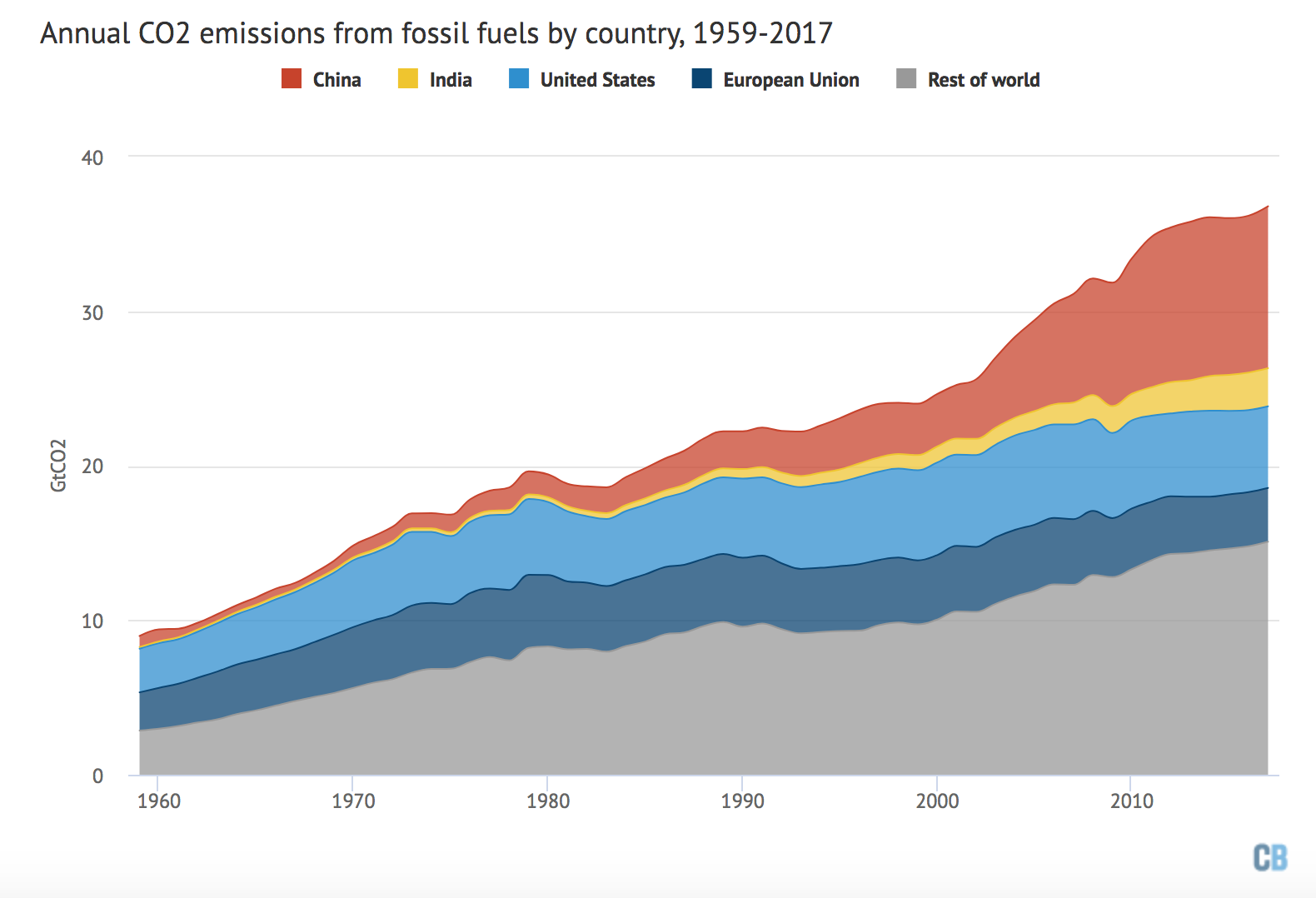 Annual CO2 emissions from fossil fuels by major country and rest of world from 1959-2017, in gigatons CO2 per year (GtCO2). Note that 2017 numbers are preliminary estimates. Data from the Global Carbon Project and available here. Chart by Carbon Brief using Highcharts.

Much of the slowdown in the growth of global emissions in recent years has been driven by a combination of reductions in the U.S. and China, as well as relatively little growth in emissions in other countries. This changed in 2017, with little-to-no reductions in U.S. emissions and a sizable increase in Chinese emissions.

India’s emissions increased a bit more slowly in 2017 than in the past few years, while the EU’s emissions have remained relatively flat since 2014 and did not noticeably change in 2017. The growth in emissions from 2016 to 2017 also more than doubled in the rest of the world. 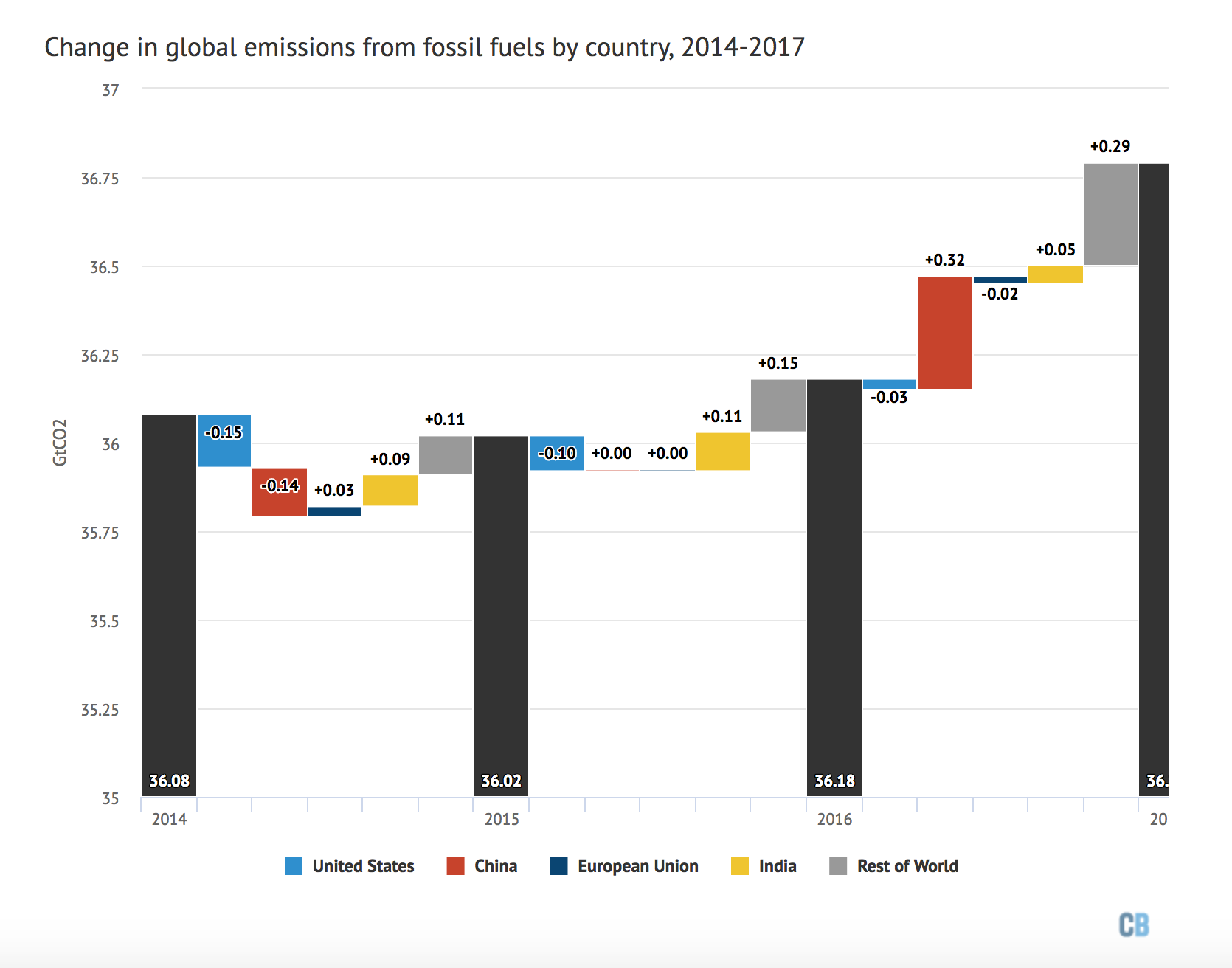 As 2017 is not yet over—and somewhat limited data is available—these projections are still subject to large uncertainties. The global estimate of a two percent increase in emissions could be as low as 0.8 percent or as high as three percent, the researchers said. The GCP will publish more complete 2017 numbers in early 2018 when all the data is available.

While the past few years have seen similar increases in natural gas and oil consumption in China, 2017 will reverse a few years of flat or declining coal consumption. The GCP reports that the 2017 increase in coal consumption—and, in turn, overall Chinese emissions—is driven by a combination in increased industrial production and reduced hydroelectric generation associated with lower-than-usual rainfall.

However, industrial growth has started to slow down again over the past three months, which might signal slower emissions growth and coal consumption in 2018.

The best estimate of 2017 U.S. emissions is for a decline of about 0.4 percent, though they could decrease by as much as 2.7 percent or increase by as much as 1.9 percent. This will likely be a smaller decrease than in past years, as U.S. emissions have declined by around 1.2 percent per year over the past decade. This reflects a modest uptick in coal use for electricity generation in the U.S. and an associated decline in gas use. 2017 will likely be the first time in the past five years that U.S. coal consumption has risen.

India’s emissions are projected to grow by two percent in 2017 (ranging from 0.2 percent to 3.8 percent), lower than, on average, the six percent growth in emissions over the past decade. This appears to be mostly due to reduced oil consumption growth and a six percent reduction in cement production. Coal consumption increased at a similar rate to prior years.

Every year the GCP provides an estimate of the global carbon budget, which estimates both the release and uptake of carbon including emissions from fossil fuels and industry, emissions from land-use changes, carbon taken up by the oceans and land, and changes in atmospheric concentrations of CO2. This differs from the commonly used term “carbon budget,” referring to how much emissions are left to meet a climate target, such as avoiding 2°C warming.

The most recent budget, including estimated values for 2017, is shown in the figure below. Values above zero represent sources of CO2—from fossil fuels and land use—while values below zero represent sinks of CO2, where the sources of CO2 end up. CO2 emissions either accumulate in the atmosphere, or are absorbed by the oceans or land vegetation. 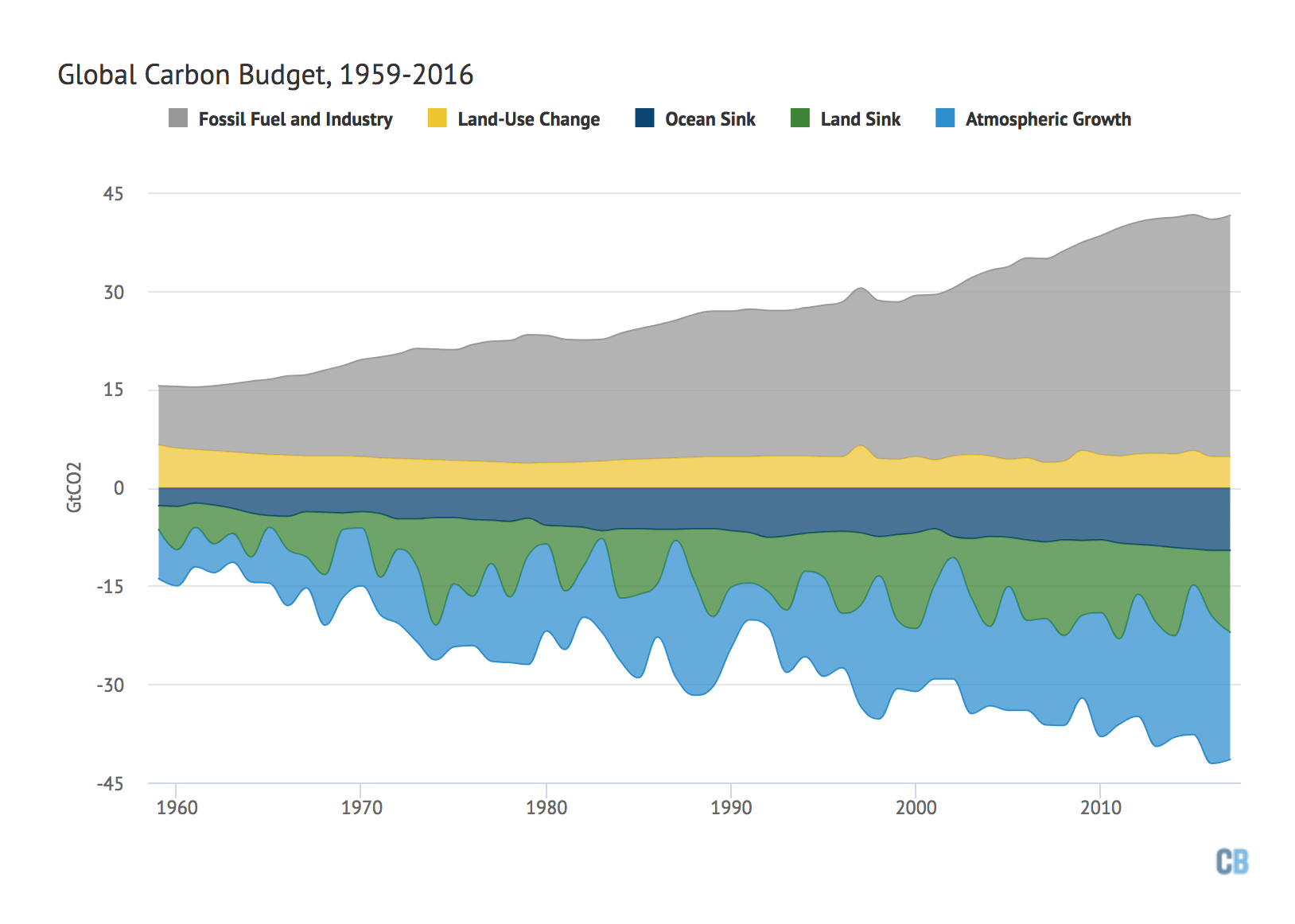 Annual global carbon budget of sources and sinks from 1959-2017. Note that the budget does not fully balance every year due to remaining uncertainties, particularly in sinks. Note that 2017 numbers are preliminary estimates. Data from the Global Carbon Project and available here. Chart by Carbon Brief using Highcharts.

Land-use changes, such as deforestation and fires, comprised 11 percent of total emissions in 2017, marginally down from the 13 percent average over the past decade. The remaining 89 percent of emissions came from fossil fuels and industry. Total CO2 emissions decreased by about two percent between 2015 and 2016, driven entirely by lower land-use emissions.

About 54 percent of CO2 emitted in 2016 accumulated in the atmosphere, while the remainder was taken up by carbon sinks—24 percent by the land and 22 percent by the ocean. The portion of CO2 accumulating in the atmosphere in both 2015 and 2016 was higher than average, driven in part by the large El Niño event. This is expected to drop to around 46 percent in 2017, as it is a year lacking a major El Niño.

The GCP’s new global carbon budget also includes updated estimates of sources and sinks based on changes in inventories and new research published since the last budget came out. The figure below, taken from the paper presenting the latest budget, shows the budget values used for every year from 2006 through to present. Estimates of fossil fuel emissions were revised downwards a bit from the 2016 report, particularly between 1990 and 2010. This was due largely to a change in the dataset used to estimate Chinese emissions.

The GCP’s new global carbon budget also incorporates updated land-use emission estimates that significantly revise past land-use change emissions, showing higher emissions prior to 1960, lower emissions between 1960 and 1999, and higher emissions from 1999 through to present. This ends up changing estimates of cumulative carbon emissions since the pre-industrial period, but given the large uncertainties involved the authors caution against using these revisions to draw conclusions about remaining carbon budgets associated with staying within the 2°C or 1.5°C warming targets.

Implications for limiting warming to 2°C

As previously discussed by Carbon Brief, the later that global emissions peak, the more rapid the reductions must be to limit warming to 2°C. The figure below shows how the rate of reduction varies based on peak year, adding in the new estimated 2017 emissions. 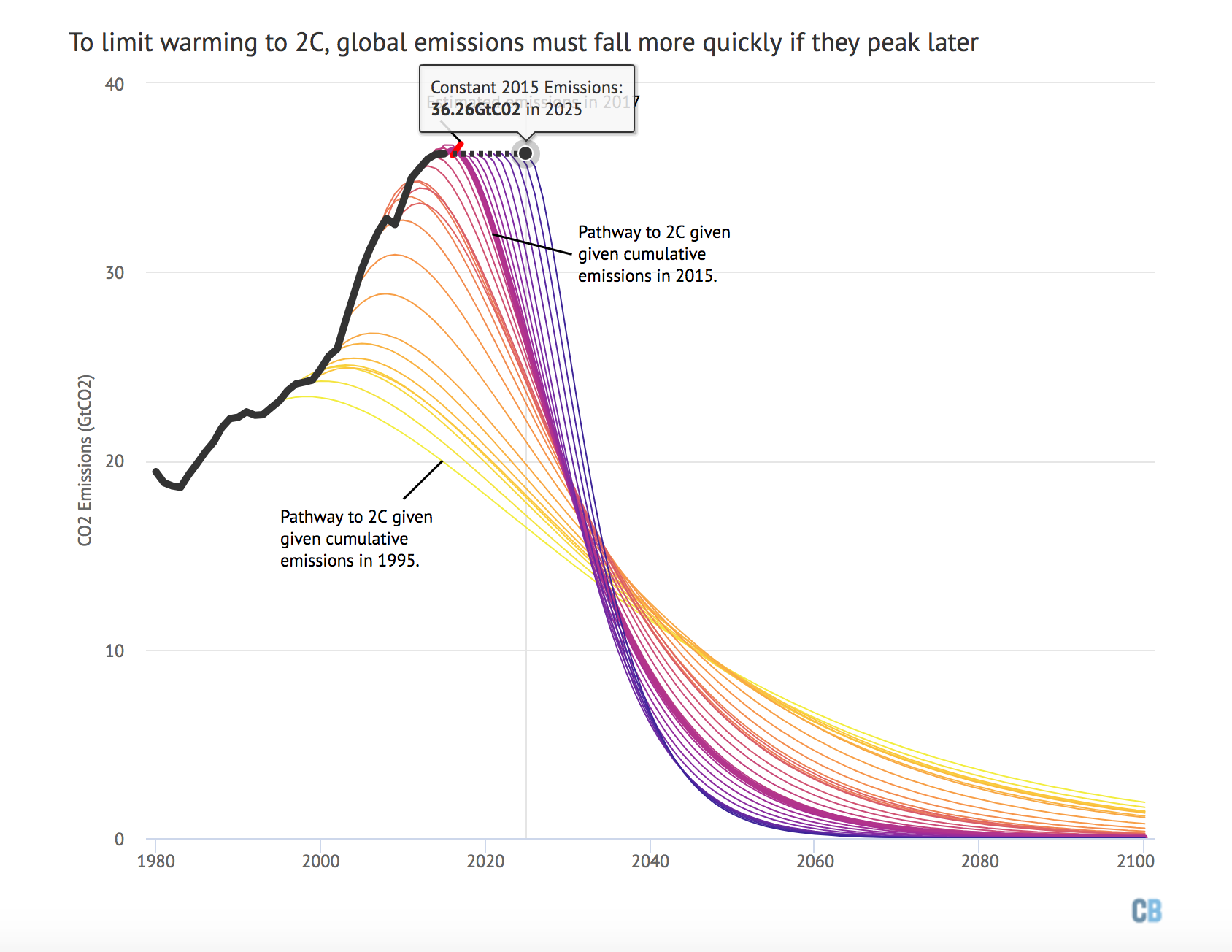 The increase in emissions in 2017 makes it more challenging for the world to limit warming to “well below 2°C”, as per the Paris agreement—at least in the absence of large-scale removal of carbon dioxide from the atmosphere from as-yet-unproven negative emission technologies later in the century.

While the slowdown in emissions over the past few years and the “peaking” of emissions by a number of countries has been cause for cautious hope, this is tempered by the uptick in emissions projected in 2017. According to UN Environment, existing commitments by nations fall well short of what is needed to meet warming targets and emissions will not fall quickly until the world undertakes much more ambitious mitigation actions.