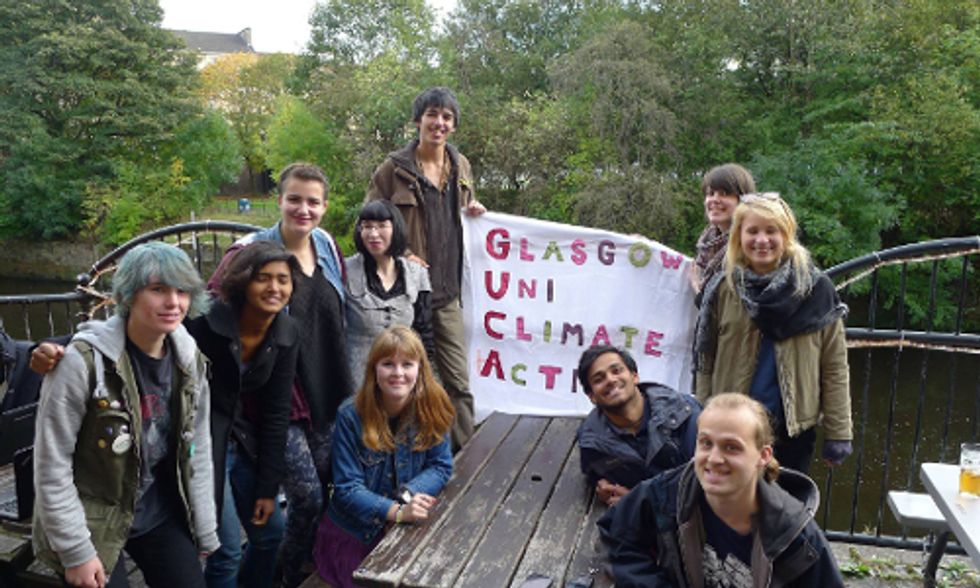 The movement on college campuses to divest from fossil fuels has been growing in the U.S. and currently has commitments from 13 schools including Stanford University. Now Glasgow University has become the first academic institution in Europe to decide to divest.

This is a victory for the student-led Glasgow University Climate Action Society (GUCAS). As in the U.S., the European movement is led primarily by students. After a year-long campaign involving more than 1,300 students, freedom of information requests, rallies, flash mobs, fake oil spills and banner drops, the University of Glasgow Court voted today to remove 18 million pounds (about 29 million dollars) from investments in fossil fuel companies over a ten-year period and to freeze further investments from its entire 128 million pound endowment.

In a petition posted at gofossilfree.org, the students wrote, "The university has both a moral and a financial duty to its students to withdraw its investments from the fossil fuel industry. The moral case is clear: if it is wrong to wreck the climate, then it is wrong to profit from that wreckage. Furthermore, fossil fuels are a dangerous investment. The value of companies like Shell, BP and Chevron is based on the assumption that they will be able to dig up and sell their fossil fuel reserves. But if the world gets serious about stopping climate change, that would mean keeping 80 percent of proven fossil fuel reserves in the ground, and the assumption that forms the basis for these companies' value will be undermined."

In announcing the decision, David Newall, secretary of the University of Glasgow Court, said, “The University recognises the devastating impact that climate change may have on our planet and the need for the world to reduce its dependence on fossil fuels. Over the coming years we will steadily reduce our investment in the fossil fuel extraction industry, while also taking steps to reduce our carbon consumption."

“We are delighted that the University of Glasgow has decided to take a committed stance against climate change and cut its financial ties with the fossil fuel industry," said Sophie Baumert of GUCAS in response to the news. "This is huge step for the Fossil Free campaign in the UK and we hope that our university will serve as a role model for other universities."

Student groups at London's Imperial College and University College are demanding that their institutions take similar action. And the School of Oriental and African Studies (SOAS) at the University of London has already agreed to freeze investments temporarily pending a decision on full divestment expected next month.

The university court received hundreds of message of support from both students and the public, including Naomi Klein, author of This Changes Everything: Capitalism Vs. The Climate. Today she posted, "Congrats to Glasgow Uni on becoming the university in Europe to divest from fossil fuels. Another kind of independence!!"

“Congratulations to the successful student lead campaign which will see the University of Glasgow divest 18 million pounds from fossil fuels—the first university in Europe to take this step," said Klein. "Glasgow University is joining the fast growing global divestment movement providing much needed hope to the prospect of climate action.”