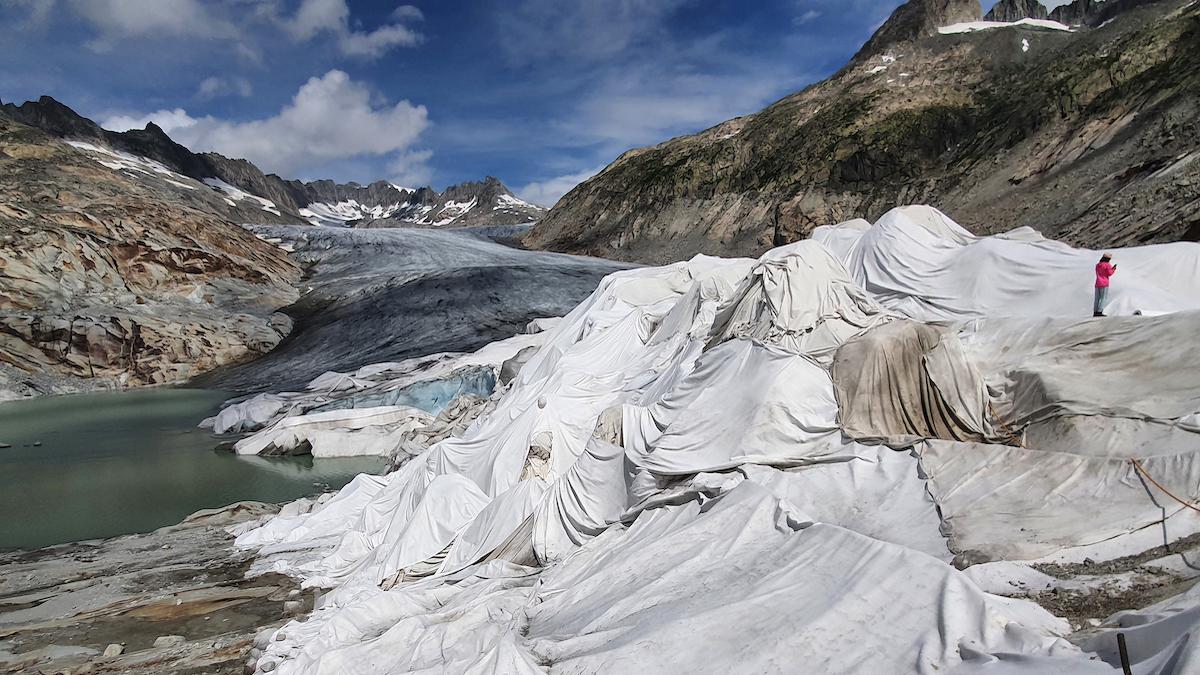 Usually, humans huddle up in blankets to stay warm in the winter.

For the glaciers of Switzerland, however, the opposite is true. A ski resort in the Swiss Alps is using blankets to protect a glacier from melting in the summer sun.

“We lay the fleece over the glacier like a natural protective shield,” Gian Darms, who handles snow conditions for a cable car operator called Titlis Bergbahnen, told Reuters.

Resort staff at one of Switzerland's most popular Alpine destinations are covering parts of Mount Titlis with a protective polyester fleecing to stave off summer melting https://t.co/HSyXgO1DXd pic.twitter.com/cNwtfig4KM

The strategy is being employed atop the 10,623-foot Mount Titlis. The mountain’s glacier has already lost ice in the last few decades and is expected to disappear entirely within the next 50 years due to the climate crisis.

To delay this process, resort employees spend five to six weeks every summer covering parts of the glacier with protective polyester fleece. This radiates the sun’s energy back into the atmosphere, preventing melting and also preserving the snow that fell on the glacier the winter before. The employees then remove the coating and use collected snow to fill any cracks in the glacier’s surface.

While this is not the first year that the resort has employed this strategy, the amount of glacier covered has increased over time to almost 100,000 square meters (approximately 1,076,391 square feet).

The ski resort’s actions are a symptom of how the climate crisis is impacting mountain glaciers in addition to polar ice. A 2019 study found that the European Alps would lose around two-thirds of their glacier cover by 2100 if greenhouse gas emissions are reduced and more than 90 percent if no action is taken. Another study published this year concluded that mountain glaciers were melting at unprecedented rates, with the fastest-melting glaciers in Alaska and the Alps.

This has serious implications for the European ski industry, Reuters noted, and other resorts have attempted to cover their glaciers. The first time this was tried in Switzerland was in 2004 when white tarpaulin was used over the Gurschenfirn glacier above the Andermatt resort, according to the Swiss Federal Institute for Forest, Snow and Landscape Research (WSL). Since then, seven other glaciers in the Swiss Alps have been covered. One small glacier at the Diavolezza resort was even “brought back to life” using this tactic, according to WSL.

A recent study from WSL, ETH Zurich and the University of Fribourg found that this strategy was effective to protect smaller local glaciers, such as those at resorts. In Switzerland, Glaciers under coverings experienced approximately 60 percent less ice and snow loss than other glaciers nearby. However, the strategy is not cost-effective on a wider scale. It would cost a little more than $1 billion a year to cover all of Switzerland’s glaciers.

“The only way to effectively limit the global retreat of glaciers is to reduce greenhouse gas emissions and thus the warming of the atmosphere,” study leader Matthias Huss concluded.