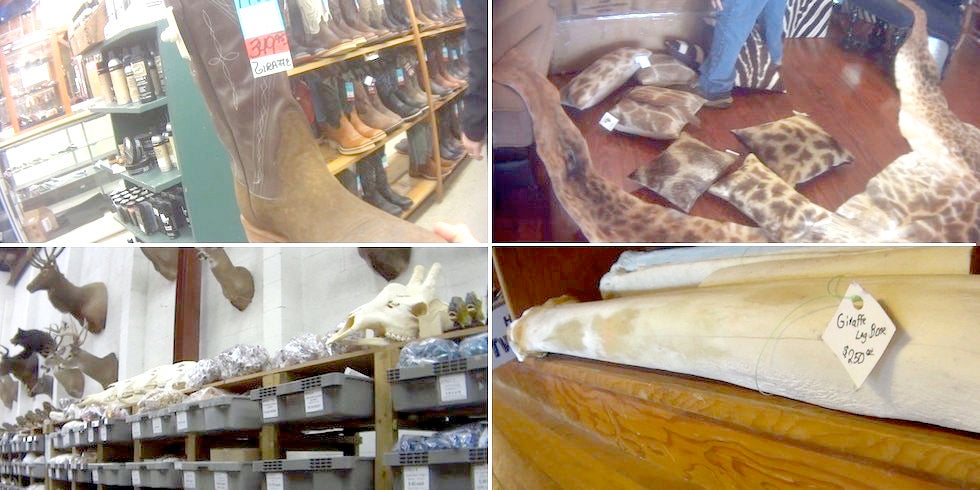 Conservation groups say the United States is playing a role in the
significant decline of wild giraffe populations by allowing their skin, bones and other body parts to be sold on the U.S. market.

From 2006 to 2015, the
U.S. imported approximately 40,000 giraffe parts and products, thought to represent nearly 4,000 individual giraffes, according to a report released Thursday by Humane Society of the United States and Humane Society International.

The report reveals that giraffe parts and products are sold online and in stores by at least 51 dealers across the country. An undercover investigator visited 21 of these stores and found products such as giraffe leather boots, knives and carvings made from their bones, taxidermy trophies, and pillows, rugs, book covers and furniture made from skin and hide.

Additionally, the report said that some of these sellers have criminal records for serious animal-related crimes, including the trafficking of rhino horn.

The U.S. does not prohibit the sale of such products, which is why Humane Society and
other conservation organizations are petitioning the U.S. Fish and Wildlife Service to list the giraffe as “endangered” under the Endangered Species Act to restrict the import, export and sale of giraffe specimens in the U.S.

Take action now! Please sign the petition to list giraffes as endangered under the Endangered Species Act, which would provide increased protection for this iconic species! ???https://t.co/GYwZSzQBot (3/3)#fightforALLanimals #endangeredspecies #bantrophyhunting

— The Humane Society of the United States (@HumaneSociety) August 23, 2018

Africa’s giraffe population has
declined by 40 percent in the past 30 years, from 150,000 in 1985 to less than 100,000 individuals today. Their decline has been attributed to habitat loss, hunting for meat and poaching. In December 2016, the International Union for Conservation of Nature moved the mammal’s conservation status from “least concern” to “vulnerable” on its Red List of Threatened Species.

On average,
more than one giraffe per day is imported into the U.S. by American trophy hunters, Humane Society said in a press release, adding that increased demand for giraffe specimens in the U.S. is fueling more killing of the vulnerable species.

Hunting advocates contend that hunting big game provides local economies with funds for wildlife conservation programs. In a comment to the New York Times, Safari Club International said that “despite the rhetoric in the media, legal regulated hunting is one of the most effective means of conservation.”

But killing giraffes for trophies, accessories and trinkets adds to the major threats causing the species to decline, according to Kitty Block, acting president and CEO of Humane Society U.S. and president of its international arm.

“Purchasing giraffe parts puts the entire species at risk. The giraffe is going quietly extinct. With the wild population at just under 100,000, there are now fewer than one third the number of giraffes in Africa than elephants,” Block said in a statement.

“We urge the U.S. Fish and Wildlife Service to list the giraffe as endangered under the Endangered Species Act to help combat this trade and reduce population declines before it’s too late,” she said.