The Art and Science of Resurrection in ‘Ghost Species’ 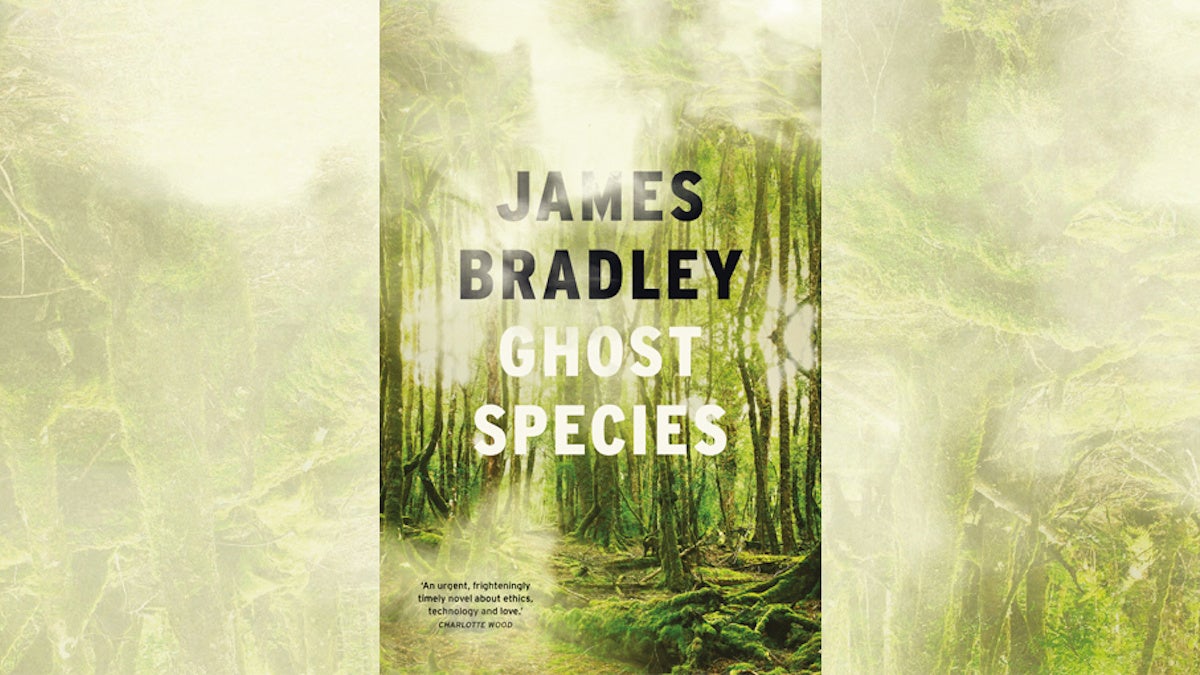 It introduces us to Kate Larkin, a scientist who takes part in a secret project to resurrect extinct species that will, in theory, help to re-engineer the planet. Questions of ethics and biological authenticity circulate the project, only to grow more complex when the scientists extend their work to bringing back one of humanity’s closest ancient relatives – a Neanderthal. After the baby’s birth, Kate begins to question the very things that make us human.

Timely and beautifully written, Ghost Species is an elegiac exploration of science and compassion against a backdrop of planetary trauma. In this interview, I asked James what inspired the novel, what he learned about the real-life science of recreating ecosystems, and his feelings about the future.

Amy Brady: Before we discuss Ghost Species specifically I’d like to talk about your writing interests more generally. Your previous novel, Clade, dealt acutely with the climate crisis, and you’ve written essays about the issue as well. What continues to draw you to the subject of climate change in your writing?

James Bradley: I have a friend who talks about “the knowledge,” by which she means that moment when you fully appreciate the scale and urgency of the climate crisis and its implications. I’m not sure I really think it’s quite as simple or as singular as that – it seems to me most of us continue to resist that understanding in various ways, and to struggle with the complex and often frightening feelings that come with it – but I think she’s right that once you’ve got there, nothing is the same. Politics, art, love, relationships: they’re all transformed. A lot of my writing over the past decade or so has been trying to think my way into that awareness, and then to try to make sense of what you do with it once you’re there.

Amy Brady: Ghost Species explores the questions surrounding the science and ethics of de-extinction. Unlike other novels I’ve read on the subject, yours feels remarkably plausible. Tell us about your research process and what surprised you the most about what you learned.

James Bradley: I decided quite early on that I didn’t want to spend pages and pages discussing the technicalities of the science, partly because I didn’t think most readers would be terribly interested in them, partly because I felt they’d detract from the emotional questions that seemed to me to be at the heart of the book. But interestingly, my route into the idea was actually a bit like the one Davis, the billionaire who finances the project, follows. So I began by reading about rewilding and recreating ecosystems rather than reading about the nuts and bolts of recreating extinct species in the lab. That led me to the story of the ways in which reintroducing wolves to Yellowstone altered the physical structure of the rivers, and that led me to the idea that you might try to slow down the melting of the permafrost by using de-extinct ice age animals to re-engineer the climate in the north, in the way Sergey and Nikita Zemov are in Siberia.

Perhaps because I began thinking about ecosystems and interconnectedness and cycles of energy, when I came to start looking at the actual science of de-extinction I was less focussed on the technicalities than I was on the question of what extinction – and by implication de-extinction – might mean, not just as a metaphor for all the ways in which environmental crisis is upsetting and unhinging time and temporality, but for the kind of loneliness we all feel in a world where so much is being lost all around us.

Amy Brady: A question at the heart of your new novel is whether an extinct animal – or even an extinct human relative, the Neanderthal – can be considered “real” once resurrected. Is this a question that scientists are taking seriously? Is it one that you yourself have landed on an answer to?

James Bradley: When an animal or a species disappears from the world it’s not just their biological identity that’s lost, it’s also a way of being in the world, and a whole host of complex entanglements with other species and their environment. That absence is profound and immense, but it also means that even if we do find the means to bring back vanished species, they will lack those connections and meanings. For Eve that disconnection is manifested through a larger sense of separation and loneliness, the feeling she’s always an outsider. But what also happens in the book is that both Eve and some of the other recreated species begin to change and adapt – to go wild, I suppose – and as they do their lives begin to take on new shapes and new meanings, although not necessarily the ones their creators might have expected.

Amy Brady: Your novels emphasize compassion, how humans can find deep wells of love and sympathy and beauty even in times of great distress. So often in public debate climate change is discussed in terms of fear and anger, or on the other side of the spectrum, hope and courage. What roles might love and compassion play in not only climate debate, but perhaps in climate action?

James Bradley: I think it’s really difficult to describe the scale or the trauma of last summer’s bushfires here in Australia. Dozens of people were killed, thousands of homes were destroyed, and a whole range of animals and plants were pushed to the brink of extinction. But as I wrote at the time, what was really striking wasn’t the anger and fear and grief, all of which was real and palpable (and given our government’s appalling record on climate, justified), it was the outpouring of generosity and kindness. Truckies and tradies organized food deliveries, other people set up websites to find people who’d lost their homes a place to stay, members of the Muslim and Sikh communities took food to the firefighters, all of whom were volunteers, and many of whom had been fighting the fires for weeks or even months on end, and people gave millions of dollars to charities.

That didn’t come out of nowhere. People did it because they saw people were suffering, and they wanted to help. That recognition other people’s suffering is real is incredibly important, because once we do that it’s much harder to look away, or to treat other people’s lives as expendable.

Amy Brady: Speaking of love, I loved your protagonist Kate Larkin. Where did she come from? Is she inspired by anyone in real life?

James Bradley: I think all my writing is pretty personal, but with this book I really wanted to find a way of writing that erased all the barriers between me and the work, so I was writing out of somewhere very intimate, and undefended. I did that because I wanted to find a way of articulating a range of feelings of grief and fear that I usually need to keep under control so I can keep functioning. But it also meant I ended up using a lot of material from my own life in a pretty direct way: certainly the material about parenting and children is drawn from my own experience, and addiction and alcoholism have had a big impact on people very close to me. I suppose that desire to write without distance is also about the context in which I wrote the book. I began it just after my father died, and my mother died just as I was finishing it, and it’s very much bookended by those losses, and a recognition of what they both meant to me.

Amy Brady: Climate change is often depicted as a slow-moving phenomenon, but so much has happened since the last time we did an interview together for this column in late 2017 – a mere two and a half years ago. North America experienced one of its worst hurricane seasons in history, and Australia suffered one of its worst bushfires in history. And that’s just in our respective home countries. I asked you back in 2017 if you were hopeful for the future, and you gave a thoughtful and elegant answer that I will paraphrase as “I’m wary of despair.” Have your feelings about what’s in store for us changed? Are you still at least cautiously hopeful about what the future might bring?

James Bradley: When I wrote Clade one of the things I wanted the book to do was to push back against the idea the future is set, and make a space for possibility and change. I think over the past few years it’s become much harder to hold onto the idea we might avoid the worst of what’s coming. Having said that, I still think despair is a cop-out and an indulgence, and that even if the odds of staying under two degrees of warming are now slim, there’s a big difference between two degrees and three, or three degrees and four, and which of those we end up with depends on what we do now.

Amy Brady: What’s next for you?

James Bradley: It’s a really good question! In fact, I’ve just finished a draft of a new novel, and I’m working on a book of non-fiction about the ocean, but both of them are still a way off. In the meantime, I’ve got a couple of long essays that should be out in the next few months, and I’m working on a couple of articles and a new novella. So I’ve got a lot of things on the boil, which is always nice.