Getting the Market to Tell the Truth 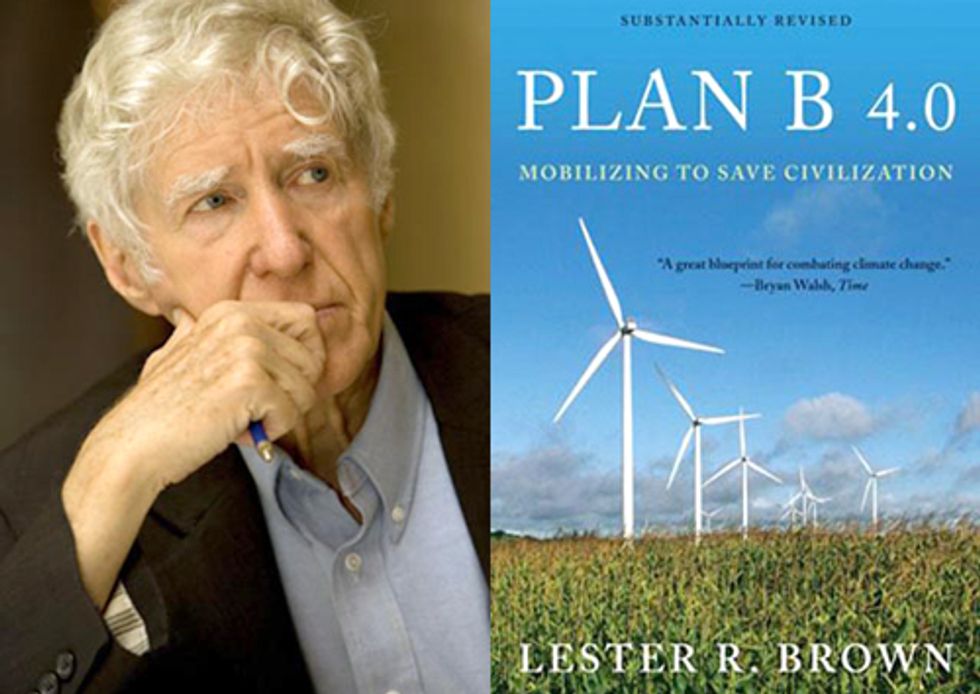 Moving the global economy off its current decline-and-collapse path depends on reaching four goals: stabilizing climate, stabilizing population, eradicating poverty and restoring the economy’s natural support systems. These goals—comprising what the Earth Policy Institute calls “Plan B” to save civilization—are mutually dependent. All are essential to feeding the world’s people. It is unlikely that we can reach any one goal without reaching the others.

The key to restructuring the economy is to get the market to tell the truth through full-cost pricing. If the world is to move onto a sustainable path, we need economists who will calculate indirect costs and work with political leaders to incorporate them into market prices by restructuring taxes. This will require help from other disciplines, including ecology, meteorology, agronomy, hydrology and demography. Full-cost pricing that will create an honest market is essential to building an economy that can sustain civilization and progress.

For energy specifically, full-cost pricing means putting a tax on carbon to reflect the full cost of burning fossil fuels and offsetting it with a reduction in the tax on income. Some 2,500 economists, including nine Nobel Prize winners in economics, have endorsed the concept of tax shifts. Harvard economics professor and former chairman of George W. Bush’s Council of Economic Advisors N. Gregory Mankiw wrote in Fortune magazine: “Cutting income taxes while increasing gasoline taxes would lead to more rapid economic growth, less traffic congestion, safer roads, and reduced risk of global warming—all without jeopardizing long-term fiscal solvency. This may be the closest thing to a free lunch that economics has to offer.”

The failure of the market to reflect total costs can readily be seen with gasoline. The most detailed analysis available of gasoline’s indirect costs is by the International Center for Technology Assessment. When added together, the many indirect costs to society—including climate change, oil industry tax breaks, military protection of the oil supply, oil industry subsidies, oil spills and treatment of auto exhaust-related respiratory illnesses—total roughly $12 per gallon. That is on top of the price paid at the pump. These are real costs. Someone bears them. If not us, our children.

If we can get the market to tell the truth, to have market prices that reflect the full cost of burning gasoline or coal, of deforestation, of overpumping aquifers, and of overfishing, then we can begin to create a rational economy. If we can create an honest market, then market forces will rapidly restructure the world energy economy. Phasing in full-cost pricing will quickly reduce oil and coal use. Suddenly wind, solar and geothermal will become much cheaper than climate-disrupting fossil fuels.

If we leave costs off the books, we risk bankruptcy. A decade ago, a phenomenally successful company named Enron was frequently on the covers of business magazines. It was, at one point, the seventh most valuable corporation in the U.S. But when some investors began raising questions, Enron’s books were audited by outside accountants. Their audit showed that Enron was bankrupt—worthless. Its stock that had been trading for more than $90 a share was suddenly trading for pennies.

Enron had devised some ingenious techniques for leaving costs off the books. We are doing exactly the same thing, but on a global scale. If we continue with this practice, we too will face bankruptcy.

Another major flaw in our market economy is that it neither recognizes nor respects sustainable yield limits of natural systems. Consider, for example, the overpumping of aquifers. Once there is evidence that a water table is starting to fall, the first step should be to ban the drilling of new wells. If the water table continues to fall, then water should be priced at a rate that will reduce its use and stabilize the aquifer. Otherwise, there is a “race to the bottom” as wells are drilled ever deeper. When the aquifer is depleted, the water-based food bubble will burst, reducing harvests and driving up food prices.

Or consider deforestation. Proper incentives, such as a stumpage tax for each tree cut, would automatically shift harvesting from clearcutting to selective cutting, taking only the mature trees and protecting the forests.

Not only do we distort reality when we omit costs associated with burning fossil fuels from their prices, but governments actually subsidize their use, distorting reality even further. Worldwide, subsidies that encourage the production and use of fossil fuels add up to roughly $500 billion per year, compared with less than $70 billion for renewable energy, including wind, solar and biofuels. Governments are shelling out nearly $1.4 billion per day to further destabilize the earth’s climate.

We are economic decisionmakers, whether as corporate planners, government policymakers, investment bankers or consumers. And we rely on the market for price signals to guide our behavior. But if the market gives us bad information, we make bad decisions, and that is exactly what has been happening.

Olivia Rosane
Animals
One of the beavers released into England's Somerset county this January, which has now helped build the area's first dam in more than 400 years. Ben Birchall / PA Images via Getty Images

What is the most common form of human infrastructure in the world? It may well be the fence. Recent estimates suggest that the total length of all fencing around the globe is 10 times greater than the total length of roads. If our planet's fences were stretched end to end, they would likely bridge the distance from Earth to the Sun multiple times.

Climate change is making ancient Hopi farming nearly impossible, threatening not just the Tribe's staple food source, but a pillar of its culture and religion, the Arizona Republic reports.

The most polluted river in the world continues to be exploited through fishing practices that threaten endangered wildlife, new research shows.

Common Dreams
Climate
Oil spills, such as the one in Mauritius in August 2020, could soon be among the ecological crimes considered ecocide. - / AFP / Getty Images

An expert panel of top international and environmental lawyers have begun working this month on a legal definition of "ecocide" with the goal of making mass ecological damage an enforceable international crime on par with war crimes, crimes against humanity, and genocide.