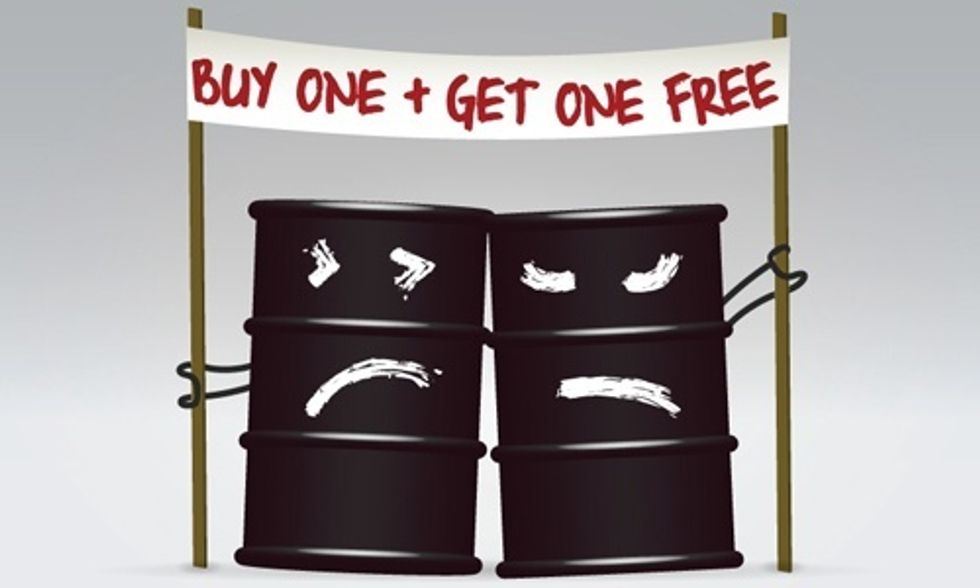 But commodity markets for oil and gas don’t work that way. These real markets are poised to savagely strand assets, upset expectations, overturn long established livelihoods and leave a trail of wreckage behind them—unless climate advocates start owning the fruits of their own success and preparing for the transition. Schumpeter’s destructive engine of capitalism is about to show its ugly side.

Markets are abandoning carbon companies—even if society continues to burn far too much of it.
Photo credit: Shutterstock

Fossil fuel prices are indeed opening the door to climate solutions, but not through the gradual carbon pricing mechanisms so favored by economists (and recently, reluctantly beginning to be explored by conservative thinkers). Instead, the divergence between clean energy price curves, which fall rapidly with market share and fossil fuel prices, which rise with consumption, are about to collide explosively.

Second, Investors are indeed, moving away from fossil fuel stocks and bonds, but not out of ethical concern over climate risk, or even an expectation of global regulation of carbon combustion. They are racing to the exit as bloated coal and oil stock values collapse on the other side of the “Commodity Super-Cycle” which until early 2014 was the dominant paradigm.

Two weeks ago I wrote two pieces in Bloomberg Views suggesting that the fossil divestment movement was arguably behind market trends in arguing that coal and oil were bad investments. The following week witnessed a cascade of commentary making my pieces look milquetoast and timid. Markets are abandoning carbon companies—even if society continues to burn far too much of it.

Look at the numbers:

U.S. coal consumption has fallen, in the face of competition from performance (efficiency), alternatives (natural gas) and disrupters (solar and wind.) Five years ago we burned a billion tons of coal; now we burn 850 million tons. Solid progress. But still 850 million tons.

What happened to coal company share values? In the last five years, a coal company has gone bankrupt on the average every month. The second largest U.S. coal company, Alpha, after one bankruptcy and reorganization, was just dumped from the NY Stock Exchange because its price fell below $1.00. Even a coal producer (Walter) whose output, metallurgical coal, still enjoys a strong market had to file for bankruptcy. The biggest U.S. coal company, Peabody, which traded in 2011 at $73, is now selling at $1.29. The bond markets have abandoned coal. All coal company debt is now graded “junk.” In the last quarter the three worst performing major U.S. bonds were all coal:

Coal, as an investment class, is effectively finished—coal companies will go through a series of reorganizations. After each one only those with the best balance sheets and cheapest mines will remain. The reclamation bonds which the U.S. government and the State of Wyoming allowed these companies to self-insure against their balance sheets are about to go south, creating sequential calls on capital that will push even more companies first into Chapter 11 and then into Chapter 7. Outside the U.S., 1/6th of Australia’s coal mines now operate at a loss. Companies in the sector are in liquidation, even though the world will use a lot of coal for quite a while to come. Eventually slumping demand will be overtaken by declining production and more mines will become cash flow positive, but existing stakeholders will be liquidated first. That’s the dynamic of shrinking commodity markets—investors, communities and workers lose fast even as markets shrink slowly.

Many investors thought they could be the last to make a profit on conventional telephone land-lines. Someone was that last lucky bottom-feeder. But most of those who entertained that illusion were wiped out. Coal investors can join the line.

But what about oil and gas? The public—and politicians—still view oil as the necessary evil and oil companies as the essential usurers of our dependence. But the markets are not so sure. Since 2011 a "five-point gap has emerged between market valuations for energy companies and the S&P 500, as returns on capital have fallen in the sector.” Federal banking regulators have begun warning lenders that many of the loans made to drillers at the height of the shale rush must be treated as “substandard.”

BP recently earned the dubious distinction of being the first of IOC’s integrated majors to have its bonds de-rated because of potential environmental liabilities from the Deepwater Horizon Spill. Shell was able to finance one of its recent pipeline projects at 23 times its earnings, but its own shares fetch only 9X. From 2006 to 2013 the percentage of Exxon Mobil’s proven reserves made up of tar sands and heavy oil increased from 15 percent to 32 percent. Relying on a larger share of more expensive oil reduced Exxon Mobil's margins and returns. Its stock value trailed the S&P 500 by 40 percent during those seven years—even as the company used the vast majority of its profits to buy back shares to sustain their value.

Chatham House in a recent analysis commented, “Even before the 2014 oil price collapse, equity investors were concerned that, with few exceptions, many companies in the oil sector were heavily committed to high-cost projects for which they had a poor record of execution.”

Now, with oil less than half its price a year ago, companies are desperately canceling projects; a few months ago $118 billion in oil exploration and development projects had been shelved; this month Wood Mackenzie said the total had risen to $200 billion, a cut of almost 50 percent in investments to replace reserves. The biggest victims: not just U.S. shale producers, but Canadian tar sands, declining North Sea fields and Brazilian deep ocean drilling. Big investors have been hit hard: Carl Icahn and John Paulson have lost hundreds of millions of dollars on their oil bets.

Investor owned oil companies are particularly vulnerable in an oil commodity-cycle price crunch because while their existing reserves include large volumes of relatively cheap to pump legacy reserves, their ability to replace those reserves is highly constrained to the world’s most expensive ultra-deep, super-heavy and wildly remote reserves. “Even before the 2014 oil price collapse, equity investors were concerned that, with few exceptions, many companies in the oil sector were heavily committed to high-cost projects for which they had a poor record of execution.” The remaining untapped cheap or moderately costly oil fields are mostly off-limits to IOC’s, reserved by Russia, Venezuela and Persian Gulf monarchies for their nationally owned oil companies, whose long term business plan is to squeeze the Western IOC’s out of business.

In 1915, as the American economy boomed, the huge supply chain that supported horse-drawn transport—harnesses and horseshoes, wagons and buggies makers (13,000 of them), farriers and blacksmiths, hay balers and feedmills—looked like a robust and vital segment for deploying capital. 1920 was the year of “Peak Horse” in the U.S.. By 1940 it was gone. This was not “low-cost”, incremental progress. It was an economic disruption so fierce that the phrase “buggy-whip maker” became a business simile for loser.

From both the standpoint of barometric pressure and stock market volatility we have sown the winds of fossil fuel capitalism for a decade too long—but bemoaning that fact changes nothing. As Christina Figueres says “Better late than later.” We still have time to prepare for the whirlwind. It will come whether we prepare or not.