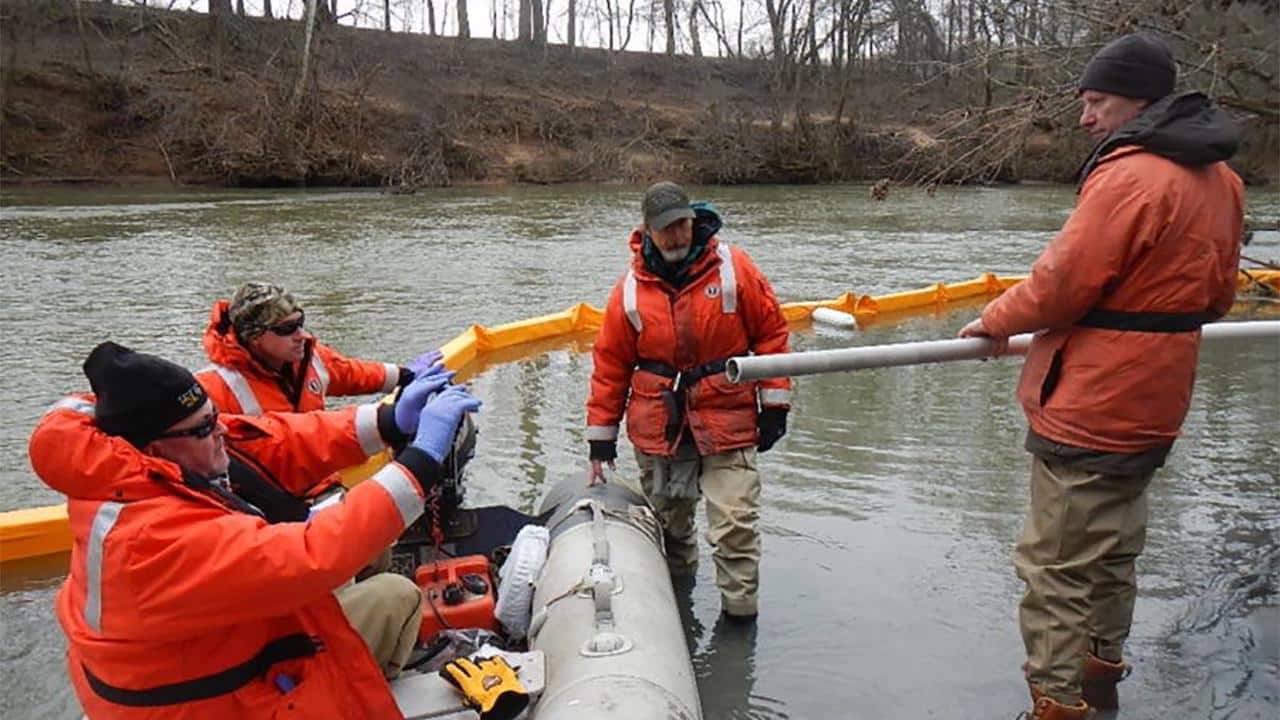 First responders gather a water sample from the Dan River in Eden, NC after a 2014 coal ash spill. U.S. Fish and Wildlife Service

This year, state legislatures will redraw the electoral map. The GOP controls most state legislatures, and they are expected to draw congressional districts to favor Republicans, which will make it easier for them to win a majority of seats in the House of Representatives, even if they fail to win the most votes overall. This dynamic will influence policymaking on a number of issues, including the environment. Recent events in North Carolina give some idea of what to expect.

In North Carolina, coal-fired plants historically dealt with the leftover ash by mixing it with wastewater and dumping it into an open pit nearby. Because coal generators need a lot of water, power plants and coal ash ponds usually sit next to a lake or river.

This arrangement can have disastrous consequences. In 2014, a pipe under a coal ash pond owned by Duke Energy in Eden, North Carolina cracked open. The pipe carried wastewater from the nearby coal plant to the Dan River. When it broke, upwards of 30,000 tons of soggy, toxic coal ash seeped into the pipe and drained into the river.

In the aftermath, the Obama administration created the first-ever regulation on coal ash ponds, though it was remarkably weak. Michael Yaki, of the U.S. Commission on Civil Rights, later said it was “practically toothless in its ability to protect the poorest and minority population of our country from things such as coal ash.” Despite this, in 2015, the House of Representatives passed a bill that would water down the regulation even further in ways that could lead to a repeat of the Dan River spill or allow coal ash ponds to leak toxins into drinking water.

Every single Republican member of North Carolina’s congressional delegation voted in favor of the bill — including Rep. Mark Walker, whose district included the site of the Dan River spill — even as North Carolina residents living near coal ash ponds were being told not to drink well water. Every Democrat voted against it. The bill ultimately died in the Democratically-controlled Senate.

To understand why North Carolina Republicans would vote for a doomed bill to slash coal ash protections, it helps to consider their political circumstances.

In the anti-Obama fervor of 2015, it wasn’t hard to marshal Republicans against the spectre of regulatory overreach, particularly against the energy industry. While Duke Energy donated to every member of North Carolina’s congressional delegation, it gave substantially more to Republicans than to Democrats. But perhaps more important than campaign contributions or the political milieu was the impact of gerrymandering.

In 2010, Republicans came to power in North Carolina, and when they redrew the congressional map, they carved up Democratic strongholds to dilute the power of Democratic voters — namely, Black voters — creating districts that wiggled and stretched across large expanses. This practice, known as gerrymandering, produced a map that heavily favored Republicans.

In 2014, the GOP won only 55 percent of the vote statewide, but they came away with 10 out of 13 seats, and not one of these races was particularly close. Every politician Republican was well insulated against swings in public opinion. A 2014 poll from the Sierra Club found that 70 percent of North Carolina voters would be more likely to support a politician who ” favors strong regulations and enforcement… to prevent future spills,” and yet every Republican fought such rules.