Germany's Superhighway for Bikes Could Take 50,000 Cars Off the Road Every Day 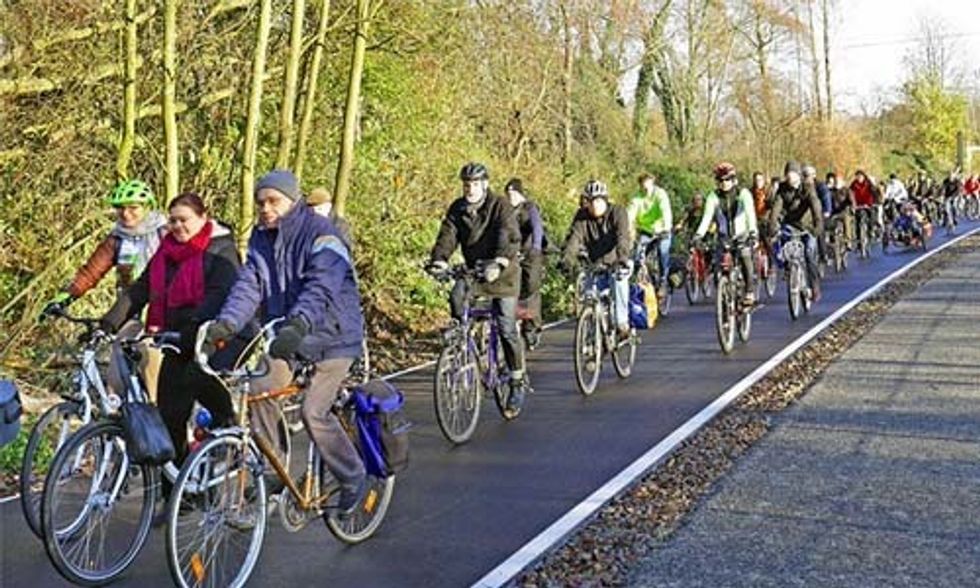 To reduce air pollution and traffic congestion, cities around the world are booting cars off roads and encouraging people to bike to work or school. It's a great suggestion—until terrified bikers find themselves riding on a street with only a stripe painted on the pavement to separate them from cars and trucks. Showing up to work a sweaty mess after cycling a long distance on a hodgepodge of inconvenient, congested side roads doesn't have much appeal either.

Germany, the country that invented the modern highway for motor vehicles, is taking on the challenge of keeping bikers safe and enabling them to easily commute long distances. It opened a three-mile-long leg of the Radschnellweg, a new autobahn for bikes, just before the New Year.

Instead of forcing riders to avoid swerving vehicles on a busy street, the Radschnellweg is a dedicated multi-lane highway for two-wheeled transport. The bike lanes are about 13 feet wide, are lit at night, and, like a road for cars, will be plowed during winter to remove snow.

Martin Toennes, a representative of the regional development group RVR, said nearly 2 million people live within about one mile of the road, The Local reported. A study from RVR found that the bike highway could result in 50,000 fewer cars per day on roads in the region. According to the U.S. Environmental Protection Agency, the exhaust pipe of one passenger vehicle pumps about 4.7 metric tons of carbon dioxide into the atmosphere, so the reduction in Germany could make a significant dent in greenhouse gas emissions.

The thoroughfare, which primarily runs along decommissioned train tracks, is supposed to expand to 62 miles in length and connect 10 cities and four universities throughout the Ruhr district in northwest Germany.

The expansion isn't without its problems. In Germany, building and maintaining bike routes has traditionally been the domain of local governments. That means that figuring out who will cough up the nearly $200 million needed to fund the expansion of the highway has become a political hot potato.

For this first section of the bike autobahn, the EU picked up half the tab. The German government and the RVR split the other half. "Without [state] support, the project would have no chance," Toennes said. As a result, some politicians have floated the idea of paying for the roadway with something motor vehicle drivers are all too familiar with: billboard advertising.

How to Build Your Own Bike Camper for Only $150