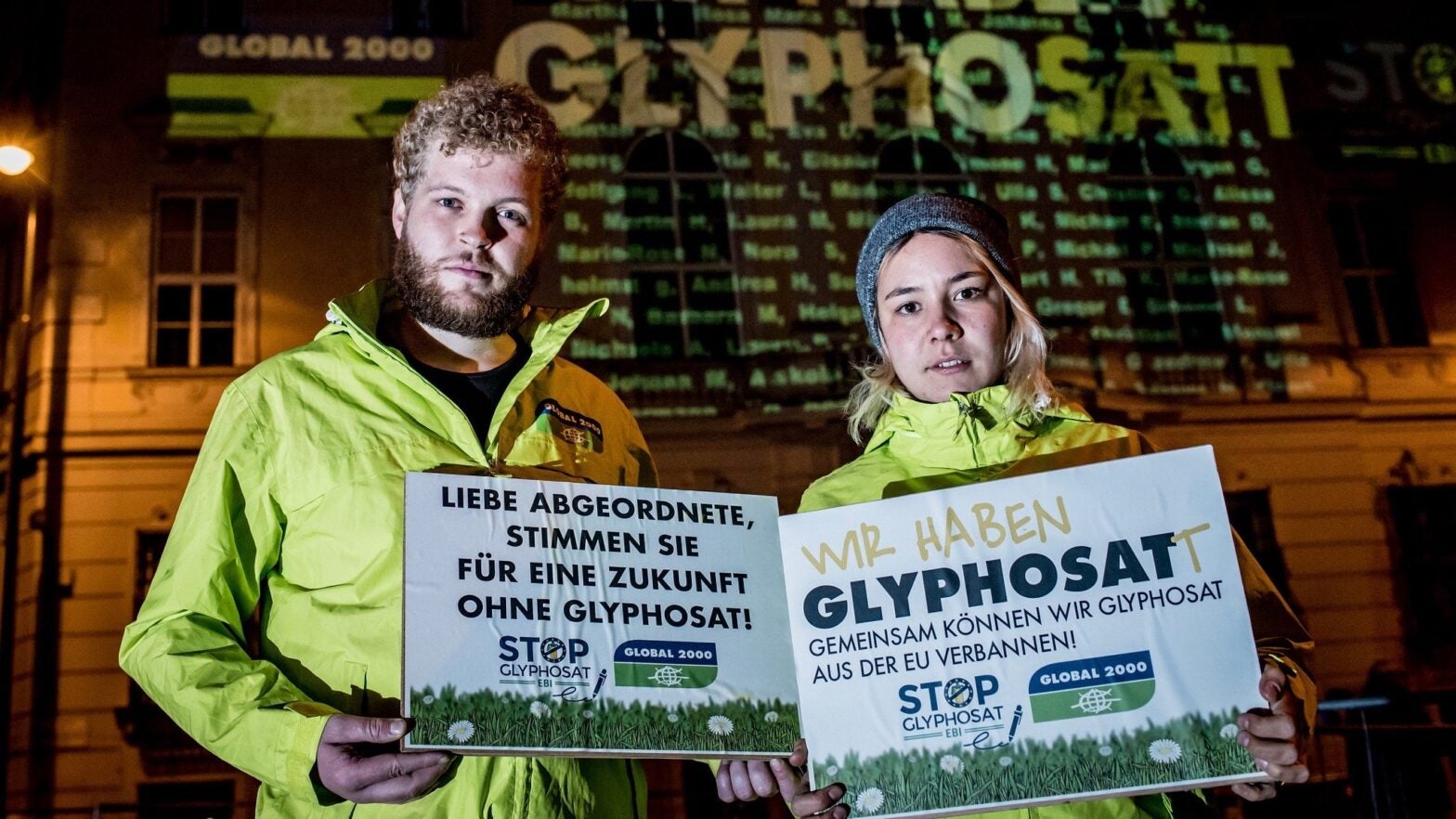 On Oct. 1, 2017, GLOBAL 2000 projected the names of all Austrians who signed the European Citizens' Initiative "Stop Gylphosat" on the façade of the Chancellery. GLOBAL 2000 / Christopher Glanzl

Use of glyphosate will be banned in Germany from the end of 2023, after a phased effort to reduce its application by farmers.

The ban, agreed by the Cabinet on Wednesday, is part of an insect conservation program from Environment Minister Svenja Schulze.

It includes a “systematic reduction strategy,” which would initially prohibit use of the chemical in domestic gardens and allotments, and on the edge of farmers’ fields.

Germany’s move comes after lawmakers in Austria passed a bill banning all use of the weedkiller, making the country the first to do so. Some 20 French mayors banned it from their municipalities last month — in defiance of their national government.

Glyphosate — also the subject of legal claims over an alleged link with cancer — was developed by Monsanto under the brand name Roundup.

The chemical is now out of patent and is marketed worldwide by dozens of other chemical groups. They include Dow Agrosciences and Germany’s BASF.

Worries about the chemical’s safety came to light when a World Health Organization agency report concluded in 2015 that it probably causes cancer.

The German chemical giant Bayer — which acquired Monsanto last year in a mammoth .5 billion deal — says studies and regulators have deemed glyphosate and Roundup safe for human use.

However, some 18,000 people have brought legal action against the firm since the takeover. They claim that the use of glyphosate has caused them to develop various types of cancer. What do EU countries think?

The chemical has also been linked with a decline in pollinating insect species like bees and butterflies.

Views over glyphosate use in the EU and how to proceed are divided by country, as well as by branch of the bloc.

In October 2017 the European Parliament approved a nonbinding resolution to ban the chemical’s use by 2022.

However, the law-making executive branch of the EU, the Commission, voted a few months later to extend the glyphosate license for another five years, though the vote revealed divisions in the bloc.

France voted against the 2017 extension, and President Emmanuel Macron has pushed for phasing out glyphosate in the coming years. Austria, Belgium, Croatia, Cyprus, Greece, Italy, Luxembourg and Malta also voted against the extension.

Germany supported the extension, though roughly one year later the country introduced stricter national regulations for pesticides. The Czech Republic has also announced it will limit its use.

Way to go, Germany! 🙌 The country said it will ban #glyphosate, the key ingredient in Monsanto's #Roundup weedkiller, over concerns it causes cancer. https://t.co/eSp5wUaPmj