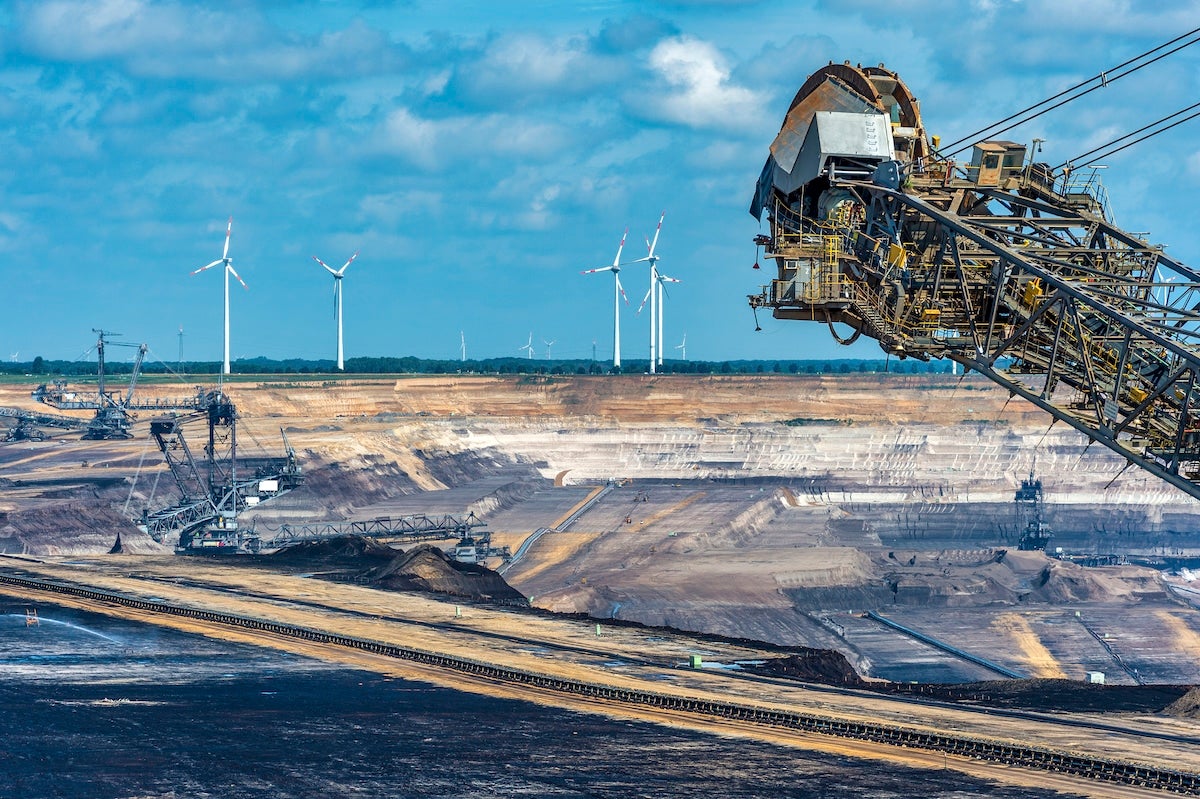 The Garzweiler coal mine with wind turbines in background in North Rhine-Westphalia, Germany. Westend61 / Getty Images

In a backwards move indicative of the world’s fitful transition from fossil fuels to renewable energy, a wind farm in western Germany is being dismantled in order to make way for the expansion of an open-pit coal mine.

The expansion of the lignite mine underscores Europe’s energy crisis, as energy security has sometimes taken precedence over clean energy.

Last month, the German government ordered brown coal be brought back to boost energy supply, as Russian gas exports via the Nord Stream 1 pipeline dried up, reported The Guardian.

Chancellor of Germany Olaf Scholz has committed to expanding renewable energy production, and RWE, the operator of the Garzweiler coal mine, said it understood taking down wind parks was confusing.

“We realise this comes across as paradoxical,” said Guido Steffen, a spokesperson for German energy company RWE, as The Guardian reported. “But that is as matters stand.”

German government authorities tried to persuade RWE to stop taking down the wind park after activists pointed out it symbolized the government going back on its climate pledges.

The original agreement for the construction of the Keyenberg wind park included a provision for the dismantling of the turbines to make room for the expansion of the mine, Steffan said.

“The three lignite units each have a capacity of 300 megawatts (MW). With their deployment, they contribute to strengthening the security of supply in Germany during the energy crisis and to saving natural gas in electricity generation,” RWE said last month, as reported by OilPrice.com.

To make way for the expansion of the Garzweiler coal mine, the populations of several communities west of Cologne were relocated, Balkan Green Energy News reported. RWE is also demolishing the town of Lützerath and its surrounding area.

The wind park consists of eight turbines. One turbine has already been dismantled and two others will be removed next year, said a spokesperson for wind park manager WPD, reported The Guardian.

The five remaining turbines were expected to be dismantled by the end of next year, said a spokesperson for the builder and operator of the remainder of the wind farm Energiekontor.

Lignite, also known as brown coal, has been mined from the coalfields in Garzweiler for over a century, said RWE, as OilPrice.com reported.

The ministry for economic and energy affairs in North-Rhine Westphalia encouraged RWE to abandon its scheme to take down the wind park.

“In the current situation, all potential for the use of renewable energy should be exhausted as much as possible and existing turbines should be in operation for as long as possible,” a ministry spokesperson said, as reported by The Guardian. “We don’t currently see any necessity to dismantle the wind power plant.”